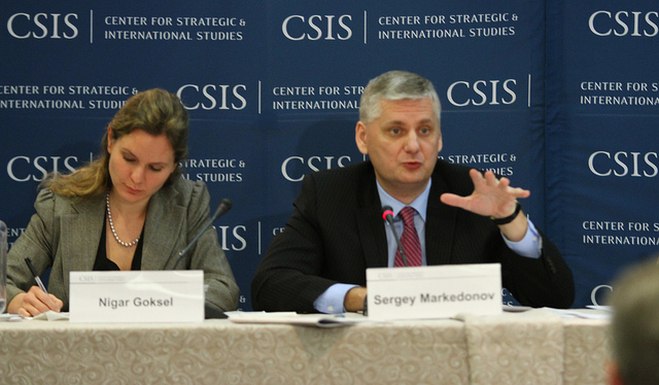 Sergey Markedonov is a Visiting Fellow in the Russia and Eurasia Program at the Center for Strategic and International Studies (CSIS) in Washington DC.

(This article was published on Politcom.ru in Russian on September 6, 2010)

The latest Caucasian cycle of presidential visits to the South Caucasus ended 2-3 September. During those days Dmitriy Medvedev visited Baku, capital of Azerbaijan. And although this visit of his was of significance in its own right (determining the prospects for Russian-Azerbaijani bilateral relations), it is expedient to analyze its results in a comparative context, bearing in mind the results of the Russian head of state's Yerevan trip (19-20 August this year). It cannot be said that the Russian president's latest Armenian-Azerbaijani cycle brought revolutionary changes to the South Caucasus. However, some bright touches were added to the new geopolitical landscape. Combining Dmitriy Medvedev's two visits into a single Caucasian cycle does not seem to us to be a mere journalistic metaphor. There are several reasons for this. And they are not only and indeed not chiefly to do with Armenia and Azerbaijan.

After August 2008 Russia and Georgia diverged to opposite sides of the barricades. It could of course be said that in the conditions of the 21st century the total isolation of two countries from each other is impossible (and more important, unreal). However, the fact remains that despite the preservation (and even consolidation) of Russian business positions in Georgia, political contacts between the two countries amount merely to the Geneva talks format, enabling each of the two diplomatic communities to monitor the other side's position from time to time. If, indeed, you do not count visits by (celebrity) Kseniya Sobchak or Mikhail Gorbachev (accompanied by other influential retirees) as serious political contacts. Incidentally, the visits to Moscow by (former Georgian Prime Minister) Zurab Nogaideli and (former parliament speaker) Nino Burjanadze can also hardly be perceived as anything other than PR operations. On 26 August 2008, by recognizing Abkhazia and South Ossetia, Moscow made its choice concerning the prospects for relations with Georgia. However, there are finer points here. Tbilisi made its choice four years earlier by beginning to "unfreeze the conflicts."

Be that as it may, Moscow has no serious levers of influence on Georgia. And none can be foreseen in the immediate future. In military terms Russia's potential is many times greater than Georgia's, but it is not Moscow's aim to annihilate Georgia's "sovereign democracy." And indeed the realization of this idea would encounter more serious resistance from the key world players than was the case two years ago. At the same time it is extremely important for the Russian Federation to preserve its influence in the South Caucasus, in view of the multifaceted links between that part of the region and the North Caucasus. Hence the heightened attention paid to contacts with Yerevan and Baku. The loss of one of these partners would have serious consequences for Russia, since in that event two out of the three entities recognized by the world community would be following an anti-Russian (at the very least, none too benevolent) course. But the snag is that Russia's two potential partners in the Caucasus are in a relationship of confrontation with each other. And although war has not been formally declared between them, there are no diplomatic relations and the Karabakh conflict is perceived in both Armenia and Azerbaijan as a military-political standoff, and moreover one that has key significance for the two states' political identities. Nagorno-Karabakh, to use images from the Middle East story, is not the "Territories" or the "Strip." It is Jerusalem. And the conflicting sides are not only conducting a regional arms race and information warfare but a fierce struggle for external support. In this respect Moscow is a very important resource for both Baku and Yerevan. It is therefore no accident that in the summer of 2010 both Armenian and Azerbaijani political experts were in no hurry to comment on the August accords between Moscow and Yerevan, preferring to wait for September' s signals from Dmitriy Medvedev in Baku. Thus, Russian diplomacy faces a difficult task -- not to allow itself to be drawn into this race and not to turn into a player in this confrontation. We have seen that it is not uncommon for strong powers to become dogs wagged by the tail -- we have seen it in the case of Russia with Chechnya, Abkhazia, and South Ossetia, and also in the story of American-Georgian relations and relations between Washington and Pristina. Medvedev's new Caucasus cycle has shown that, thus far, Moscow is succeeding in solving this dialectical puzzle. At the beginning of September 2010 the Armenian-Azerbaijani geopolitical scales were balanced.

I immediately foresee objections. Moscow prolonged the presence of its based on Armenian territory (thereby sending a signal to Baku that a violent solution is not acceptable to it), while Azerbaijan did not receive any tangible military-political "carrots." It cannot be 100% ruled out that something like that will appear, in order to bring the scales into balance. However, no such thing has emerged from the results of the Russian leader's visit to Baku. For our part we consider this line of argument superficial. In September 2010 Azerbaijan gained something that is no less important than tanks and guns. For the first time in its post-Soviet history it resolved the problem of delimitation and demarcation of the border with a neighboring state. This problem has not yet been resolved with any of the other neighboring countries. With Armenia, Azerbaijan has not so much a border as a front line. And even the Nakhichevan sector, which is much quieter than the "line of contact" in Nagorno-Karabakh, is closed and resembles a bristling border. In the course of the Nagorno-Karabakh conflict Armenian forces, occupying five districts neighboring on Karabakh entirely and two partially, took control of the former USSR border with Iran on the River Araks. And despite the positive trend in relations between Tehran and Baku the border between these two countries is a serious headache for Azerbaijani politicians (taking into account the growing ambitions of the Islamic Republic as a regional superpower).

Relations between Georgia and Azerbaijan are reminiscent of a "honeymoon," but the position of ethnic Azerbaijanis in Kvemo Kartli also creates considerable problems in bilateral relations between Baku and Tbilisi. As for the sea border that Azerbaijan shares with Turkmenistan in the Caspian, here too everything is very confused. For years now the two republics have been arguing about the oil and gas deposits in the Caspian Sea. In the summer of 2009 official Ashgabat even announced its intention of appealing to the International Court of Arbitration to uphold its rights to disputed fields.

The problem of delimitation and demarcation with Russia was also difficult to resolve. Talks on defining the 390-km state border had been going on for years, but in 14 years (beginning in 1996) the question had not found a positive solution. From time to time the sides clashed over the problem of dividing the water resources of the River Samur. There was discussion of the legal status of the border villages of Khrakhob and Uryanob. In 1954 these two villages in Azerbaijan's Khachmazskiy Rayon were temporarily transferred to the Dagestani ASSR (Autonomous Soviet Socialist Republic) as pasture land, and 30 years later the Council of Ministers of the Azerbaijani SSR (Soviet Socialist Republic) extended the term of the previous document by a further 20 years (to 2004).

The breakup of the USSR led to major adjustments to the economic plans of the "party and government." The situation was made more acute by the fact that the inhabitants were ethnic Lezgins, who also inhabit Dagestan. By the beginning of the 2000s many of them had acquired Russian passports. After August 2008 there was much speculation in the media on the subject of a repetition of the South Ossetian story in Azerbaijan. Today all this idle theorizi ng and speculation is left to the historians. Russia has become the first country after the breakup of the Soviet Union to sign a treaty with Azerbaijan on borders. The presence in the Russian delegation of important officials responsible for administration in the North Caucasus (Aleksandr Khloponin, Yunus-Bek Yevkurov) indicates that Moscow is also positioning the agreement with Baku as being advantageous to itself. The Dagestan sector of the Russian border today requires serious (and more importantly, effective) cooperation with the southern neighbor.

But what did Moscow demand in exchange?

Not very much, in fact. It is more a question of rhetoric. The Russian president, while in Baku, stated that he personally (and Russian diplomacy in implementation of the state's position) is interested in the peaceful resolution of the Karabakh conflict. Moscow is prepared to continue to perform a mediation mission to seek compromise solutions. The signal has been sent, so to speak. Following on from the Yerevan protocol, the Kremlin is trying to draw the attention of its Azerbaijani partners to the fact that the Russian Federation is interested in any solution to the conflict except a military one. But is Russia capable of fully controlling its interests? The answer to that question would most likely be negative.

Undoubtedly some hot heads (both in Baku and in Yerevan) will be cooled by Moscow's position. But then other considerations come into force, which even the staunchest admirers of the Kremlin in Armenia and Azerbaijan cannot ignore. Any Caucasian leader must resort to "patriotic rhetoric" in order to maintain his legitimacy. This becomes particularly relevant on the eve of elections (in Azerbaijan the parliamentary campaign is already gathering pace).

Therefore a resumption of military rhetoric cannot be ruled out. And this is not because politicians in Baku are more bloodthirsty. The loss of Karabakh is a national trauma that nobody is yet prepared to heal. And mentioning it makes it possible to maintain one's popularity. Thus, Russia's role in both Azerbaijan and Armenia should not be overestimated. However, the fact that Moscow is trying to play on several boards at once and attempting to pursue a balanced and pragmatic policy must be gratifying. Particularly in the context of other none too successful initiatives. It would be good if an awareness of geopolitical diversity as a necessary component of foreign policy would also penetrate other segments of Russian diplomacy.