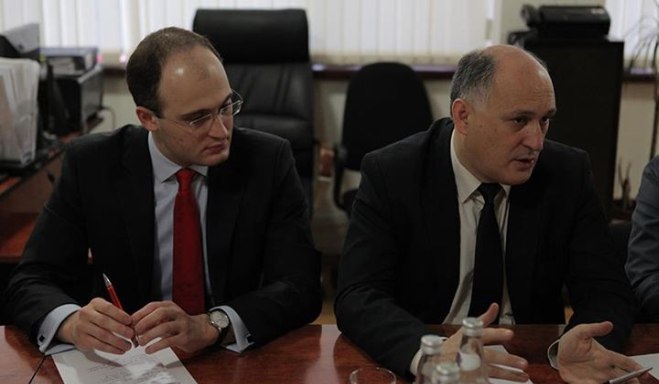 Alexander Ankvab received the Minister of Foreign Affairs Viacheslav Chirikba and his deputy Irakli Khintba who had come back from the 26th round of international discussions on security and stability in Transcaucasia that had taken place in Geneva.

Irakli Khintba briefed the President on the outcome of the 26th round of Geneva discussions that had been held on December 18.

He said that despite de facto refusal of the Georgian delegation to work constructively in the direction of adopting a joint statement on the non-use of force, as a whole, there was a certain progress in the Geneva process.

‘At the previous round the minister offered the subject of lifting the obstacles to international contacts of citizens of Abkhazia. This time we continued this subject. We made the report where it was shown by references to international law and relevant precedents and court rulings that non-recognition of the documents issued by bodies of Abkhazia is a violation of humanitarian rights of residents of Abkhazia. The international law doesn't prohibit the countries, without recognizing the government, to recognize these documents’, Khintba said.

The President was interested whether there was progress in this issue.

‘Work in this direction was supported by the majority of delegations. At the beginning of next year we will extend a draft joint statement of participants in the Geneva discussions where this issue would be raised , and I hope we will be able to move forward on this important question’, Khintba said.

‘The quality of our relationship depends, including, on the solution of this problem. Why do we have to stand at the embassies and ask-give us the visa, let us go on a trip, let us in to be treated, to study. They are democrats. So why don’t they just prove it’, Ankvab said.