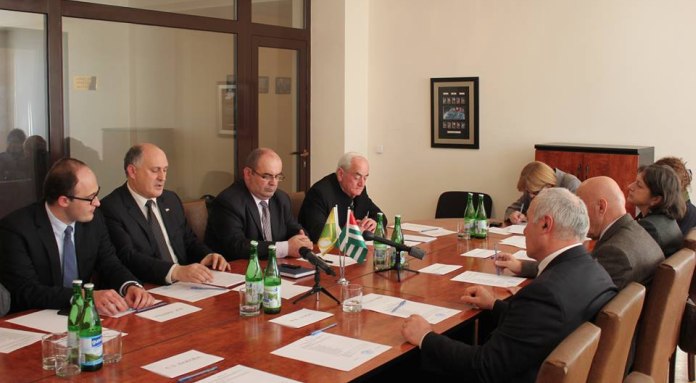 Items on the agenda were the year’s results and future directions for foreign-policy activities, strategy and tactics of the Abkhazian side with regard to the discussions in Geneva, as well as other important foreign policy issues of Abkhazia.

The Minister spoke to the participants about the results of the territorial and functional units of the MFA. The Minister noted the positive dynamics of the work on improving the image of Abkhazia and strengthening her international position. "Certainly, it is still too early to speak of broad recognition, but in many countries around the world we have managed to establish contacts and create a positive image of Abkhazia in the world’s press and among the political élites of some countries," V. Chirikba noted. On the results of the participation of the Abkhazian delegation in the Geneva talks the Minister stated: "Despite the lack of progress on the issue of signing an agreement on the non-use of force (the main goal of the Geneva discussions), there is a positive trend with regard to the issue of mainstreaming the removal of barriers to international communication."

More time giving details on this issue was spent by Deputy Foreign Minister Irakli Khintba: "Georgia is trying to pursue a non-recognition policy towards Abkhazia, which primarily has humanitarian consequences, i.e. restrictions on the freedom of movement of Abkhazian citizens and non-recognition of certificates, civil and other documents. Tbilisi believes that by "squeezing" Abkhazia, they will force it to communicate with Europe through Georgia, but nothing of the sort is happening; for example, the idea of so-called neutral passports as the only legitimate document to allow Abkhazian citizens to travel has failed. The report on the progress of the European Neighbourhood Policy stated that interest in acquiring this kind of passport is extremely low. Recognition of the travel-documents issued by the authorities of Abkhazia would be a big step towards the integration of Abkhazia into the world-community. International law does not prohibit the recognition of documents without legal recognition of the independence of the state. International law defines as a criterion for recognition of the documents of an recognised or unrecognised entity compliance of this Act with the rights and interests of its citizens, especially the rights guaranteed by international law. There are many such examples in the world. Another important humanitarian issue is that Georgian legislation criminalises the activity of economic agents in the territory of Abkhazia. Revoking these restrictions will solve many humanitarian issues that are often associated with the level of economic development."

The participants in the meeting expressed their concern over the presentation of a negative image of Abkhazia in the Russian-language media. Noting the positive dynamics of the image of Abkhazia in the foreign media, CMA Director Oleg Damenia remarked: "We need to consider seriously the situation regarding the emergence of a large amount of negative information about Abkhazia in the Russian-language media; consequently, a number of measures should be taken to set work for the dissemination of information on this path."

"Our efforts to create a favourable image of Abkhazia are sometimes neutralised by the negative information emanating from within. It is necessary to combine the efforts of various government-agencies as well as of state- and independent media to address this issue," said the Minister.

At the end of the session, the participants noted the importance of such meetings to enhance the coordination of the work of the Ministry with that of the public and expert groups.