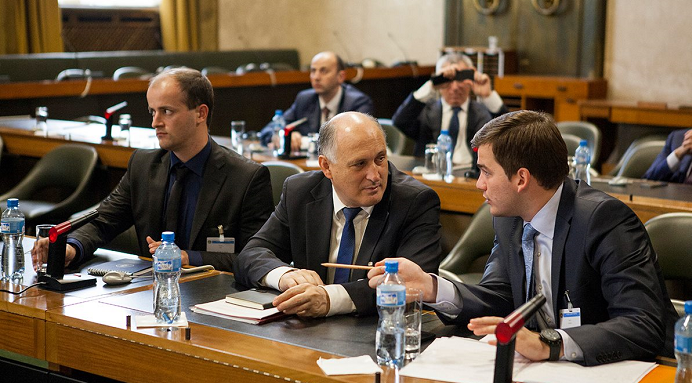 MFA Abkhazia -- On October 8 at the UN Palais des Nations in Geneva was held the 29th round of the Geneva International Discussions on Security and Stability in Transcaucasia. The delegation of the Republic of Abkhazia included the Acting Foreign Minister Viacheslav Chirikba, officers of the Abkhazian Foreign Ministry - Lasha Avidzba, Tengiz Tarba, Kan Tania and Alyas Aiba. The discussion was traditionally conducted in the format of two working groups - on security and humanitarian issues. A characteristic feature of this round was the unification of the two working groups to discuss the agenda in the afternoon.

Major part of the work of the first group was dedicated to discussion of the security situation in the border regions of Abkhazia, South Ossetia and Georgia, as well as key issues of the discussions - adoption of the agreed text of the joint statement by the parties not to use force. During the work of the first group Viacheslav Chirikba again raised the issue of the need to remove the barriers to international communication of citizens of Abkhazia, citing cases of denial of visas for Abkhazian students who planned to study in Italy, the journalists who have been refused entry to the Czech Republic, and representatives of the Abkhaz non-governmental organizations who were planning to take part in an annual conference organized by the OSCE in Poland. Russian and South Ossetian delegations shared the concern of the Abkhaz side regarding the discriminatory visa practice by the EU countries. The Co-chairs noted the legitimacy of the statement of this issue by the Abkhaz side. It was proposed to continue the discussion of this question at the next round in Geneva. The question to take measures to preserve cultural heritage of the Republic of Abkhazia, with the participation of international experts still remains one of the pressing issues of the second working group. The Abkhaz side presented a brochure with a list of archaeological, ethnographic and paleontological materials taken out of Abkhazia at different times and currently kept in museums in Tbilisi, Zugdidi and Kutaisi, which have great cultural and historical significance for the people of Abkhazia. This also includes the museum objects looted from the Abkhazian State Museum during the Georgian-Abkhazian war of 1992-1993.

The Abkhaz side prepared a presentation on the Christian churches of Abkhazia, in particular Lykhny and Mokva temples, as well as Bedia temple, which was badly damaged during the Georgian artillery shelling from January to July 1993. The Abkhaz delegation proposed to develop within the framework of the Geneva discussions a mechanism for returning of Abkhaz cultural values, as well as to invite international experts to assess the state of the ancient architectural monuments of Abkhazia in order to develop recommendations for their conservation and restoration.

The issue of return of refugees was not discussed at the 29 round of discussions in connection with the position of the Abkhaz and South Ossetian sides.

At the end of the work of both working groups the Co-moderators of the Geneva discussions marked the focus of all parties to preserve the Geneva format despite the existing differences. The next round of the Geneva Discussions on Security and Stability in Transcaucasia is scheduled for December 9-10.