President of Abkhazia Khajimba met with young diplomats and students of the Abkhaz State University.

Vice-President Vitaly Gabniya was present at the meeting. Amina Lazba, chairwoman of the Republic of Abkhazia Foreign Ministry’s Union of Young Diplomats, moderated the discussion. The young people were interested in foreign and domestic policy issues. They asked what work is being done to increase the circle of countries that recognize Abkhazia’s independence; about the president’s attitude to the Geneva talks and their effectiveness; and how the government will structure relations with the republics of the North Caucasus. A series of questions touched on the signing of the Russian-Abkhaz treaty and its impact on Abkhazia’s sovereignty, changes in the Russian-Abkhaz border crossing regime, and measures to strengthen the Abkhaz-Georgian border.

In the area of domestic policy, the young people were interested in what the government intends to do to improve the quality of life of the population. How can the real economy be developed so it becomes a locomotive for the development of the whole country? They reminded the president of his election campaign promises and asked when competitive recruitment to the public service will be introduced, and whether officials will be required to undergo assessments and fill out a declaration of their income and expenses.
Responding to the young diplomats and students, Raul Khajimba said that the Abkhaz Foreign Ministry is actively working to expand the list of countries that recognize Abkhazia. He said that active work in this direction is currently being conducted in a specific region of the world, but did not specify exactly where in order not to harm the process. 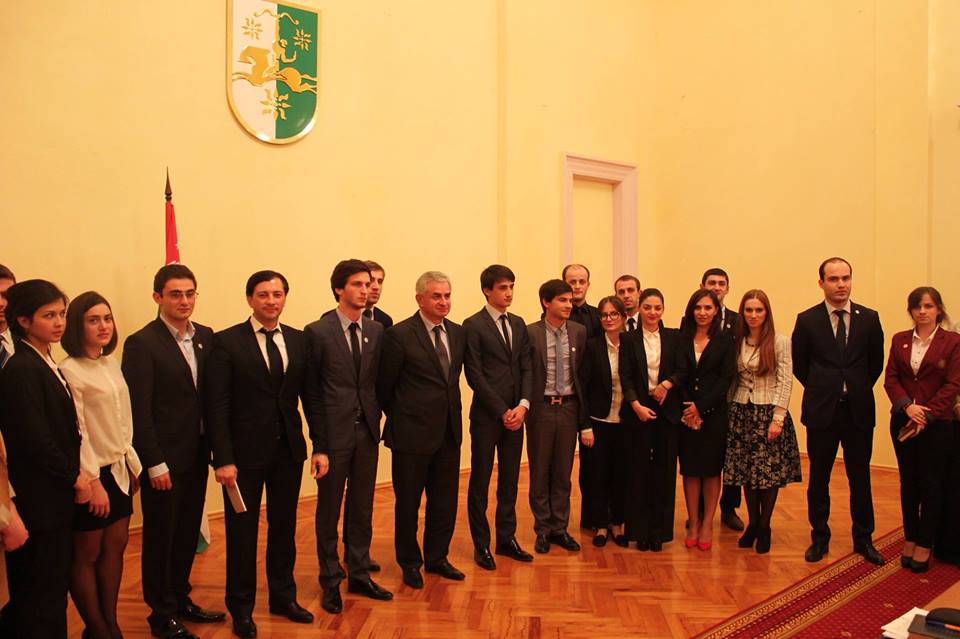 He called the Geneva talks a platform that is essential for the country and which you cannot reject, because it is there that discussion of such important issues for Abkhazia as the signing of a peace treaty with Georgia, the possibility of free travel in the world for of our citizens, and humanitarian issues takes place. If it ever becomes necessary to stop the Geneva process, the need would arise to think about other formats and possibilities, and to date we don’t have any.

He said Abkhazia’s future depends on its relations with the North Caucasus. These relations will develop, they are essential, as the peoples of the North Caucasus are closest to us in spirit and blood, and during a difficult period for the country they fought together with the people of Abkhazia for its independence. The government intends to expand cultural and economic ties.

On the issue of signing the Russian-Abkhazian treaty, he affirmed confidently that the treaty is necessary and will definitely be signed, it is not aimed at minimizing Abkhazia’s sovereignty. Relations with Russia are very important to us, Russia ensures our safety, and filling the treaty with real content depends on us. Khajimba cited the example of the treaty between Russia and Kazakhstan. He said Kazakhstan’s sovereignty was not damaged by the inclusion in that treaty of the terms “integration” and "coordinated foreign policy." The Russian-Abkhaz treaty is not about removing the interstate border. It simply entails relaxing the regime for the passage of persons and goods across the border at Psou and trying to resolve the issues of strengthening the Abkhaz-Georgian border and the creation of transport links in such a way it is possible to have one crossing and no more than two checkpoints. All the others must be closed.

In the economic sphere, conditions should be created to ensure that the financial aid which comes to Abkhazia from Russia contributes to the economic development of the country rather than land in the pockets of selected officials and those close to them, as was recently the case. Khajimba said that it is imperative to provide assistance to Gal raion and other raions of Eastern Abkhazia in the development of small and medium-sized businesses, not to subsidize them, but to help them develop by providing credits to the population. It is important to attract investors, to guarantee their safety, and to demonstrate that Abkhazia is a reliable partner. According to available information, only 20% of taxes go to the budget, if a campaign is launched against corruption and the shadow economy, it will be possible to significantly increase the budget and fund it from our own resources.

As for the competitive selection of cadres and civil servants’ income declarations and certification, a draft law "On the civil service" has already been sent to parliament, and when the parliament adopts it, all these issues will be resolved.

"I want you to know, and our society to know, that we are a leadership that is open to the people. We can’t cope with everything. There are complications, there are difficulties, many of the things we do do not please everyone, because there is a certain demand for rapid changes. Changes will certainly come about, we are ready for genuine cooperation, we are open, we will talk with you, and I have no doubt that will be useful for all of us and for society. Thank you! "