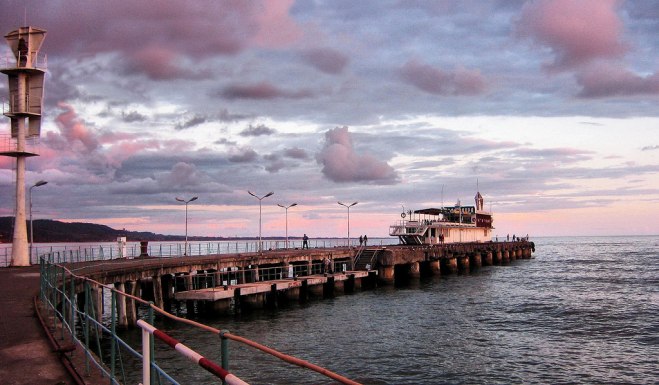 For the Pulitzer Center

The Georgian war was only a week away when in the capital city of Sukhumi we met Abkhazian President Sergei Bagapsh. We had luck. Having arrived in Sukhumi we found that on the next morning Bagapsh was to fly out to Moscow. With the president's press secretary impossible to find it looked like we had missed our chance to meet the Abkhazian head of state.

It was late afternoon but luckily in the nearly empty large administration complex located directly at the Black Sea Coast we found Parliament Speaker Nugzar Ashoba. He was still in his office. He stayed longer as in just two days he was supposed to go on vacation. Yes, he agreed, he could call the president and support our request.

For years no foreign media or diplomats visited Sukhumi but lately the situation had changed. The Abkhazian conflict that had been frozen for years saw a sudden increase in tensions this spring; Georgia encouraged a fairly large number of western journalists to come but from Speaker Ashoba’s point of view the scrutiny was welcome. He agreed it was especially important for the president to present his view to the viewers of American television. Ashoba did not need to call through the secretary -- he had President Bagapsh on the line after the second try. It took him 30 seconds to negotiate a morning appointment for us, just before the president would leave for the Sochi airport.

Meeting Bagapsh was high on my Caucasus trip priorities list. In winning the Abkhazian election in 2004 he had matched the examples of Presidents Mikheil Saakashvili in Georgia and Victor Yushchenko in Ukraine – winning power against the will of the Kremlin. Moscow supported Bagapsh’s opponent, Prime Minister (and ex Russian special services officer) Raul Khajimba. For weeks the Kremlin did not want to agree with the verdict of the Abkhazian Election Commission awarding Bagapsh the victory. His former Soviet career in the Georgian section of the youth Komsomol organisation or three years as prime minister of Abkhazia did not gain him credibility in Moscow's eyes. He is not our man, Russia's emissaries kept telling high-ranking Abkhazian officials involved in the negotiations. As it seems now Bagapsh's main sin was his Georgian wife and his reluctance to accept the initial Moscow verdict. This by definition made him unreliable.

But he and his supporters did not give up. In the end Moscow agreed to a new round of elections with Bagapsh as the presidential candidate and his former rival Khajimba as his running mate. For the people of Abkhazia it looked like the ideal ticket. In January 2005 they were supported by 90% of the voters.

In Sukhumi we stayed in the Hotel Ritsa. The balcony of my room, number 307, had been the stage for history. It was here, on January 26, 1922, that Lev Trotsky, one of the top Bolshevik leaders and Stalin's main rival, addressed a crowd of Sukhumi inhabitants at the ceremony marking Vladimir Lenin's funeral that same day in Moscow. Local Abkhazian officials had delayed his return in Moscow so that he could not attend the funeral and compete with Stalin for the party's top job.

At the hotel’s reception desk I tell the young receptionist about our meeting with the president next day in the morning. “You can meet him right now,” she replied. “You can find him maybe 200 meters from here in one of the cafes at the coast.”
Twenty minutes later we are there. We see him at the red painted table with some friends. They drink coffee and eat ice cream. In a white shirt without tie -- for those who do not know his face he could easily pass as somebody on vacation. Approaching him would not be easy, however, as two well-trained bodyguards make sure nobody tries to bother him.

At his office the next morning Bagapsh tells us that of course he visits cafes and restaurants at the coast. “Being president doesn't mean I should hide from the people.”

Even though not recognized by a single other country Abkhazia has created some familiar state symbols. It has a national flag and anthem. It requests foreigners to apply for a visa, even though it is a separate piece of paper not fixed to the foreign passport, as Abkhazians know passports with the Abkhazian visa would be unacceptable to the Georgians. As for currency Abkhazia uses the Russian ruble; with a sizable income from Russian tourists it doesn't suffer the shortage of cash. The country has its own army based on the Swiss model; that is, every adult male is obliged to keep his personal arms at home. But it also founded its own police, army and special services schools.

Bagapsh is tall and speaks Russian without a Caucasus accent. After three years in power he won enough support to think about reelection in 2009. Moscow, though at times still quite skeptical about him, had taken no overt steps to back a rival candidate. And from his perspective, the importance of Moscow's support for Abkhazia could not be stressed enough.

He recalled that for years Abkhazia had lived under conditions of economic and political blockade, not just from Georgia but also from the Russia-dominated Community of Independent States, an organization of the former Soviet republics that imposed sanctions in 1996. Russia lifted them unilaterally only few months ago.

Bagapsh feels very bitter about the attitude of other countries toward Abkhazia.

“Nobody cares if we can import medicines,” he said. “For years nobody wanted to invest money in our economy. Only Russia was willing to help.”

In 1998 during his term as Abkhazia's prime minister he met in Tbilisi with then Georgian president Edouard Shevardnadze. During their negotiations he asked him to help with the passports problem. For years Bagapsh's fellow countrymen were not able to travel abroad, there was no country willing to issue passports to Abkhazians. According to Bagapsh Shevardnadze angrily refused to give them Georgian passports. He suggested that Abkhazians should consider accepting UN travel documents. To Bagapsh this was unacceptable:

He recalls vividly what he said a decade ago to Georgia’s leader. “We will ask Russia to help – and in five years most of our citizens will have Russians passports.”

And that is precisely what happened, albeit a little more slowly than Bagapsh had predicted.

Compared to some other Abkhazian politicians Bagapsh comes across as less militant, more moderate. Perhaps it is his soft, low voice; perhaps it is his eschewing of aggressive war rhetoric.

But there is one issue on which he would be never willing to make any concessions. He insists that the only future for Abkhazia is as an independent state, one that is recognized by the international community.
Just a week before the war he did not hide his concerns about Georgia getting so many armaments from the US, Israel and Europe. Witnessing the delivery of such shipments of arms, he says, one has to prepare for war.

“I wonder with whom Georgia is willing to fight?” he asks during our meeting. “We too have friends who help us to arm our army. And we are ready for their possible offensive. Georgians should remember that they do not have friends in the Caucasus. If we are attacked many local ethnic groups will rush to help us – and that will be the end for Georgia as independent nation.
”He sees no chance that Abkhazians would agree to return to Georgia, even if they would be given the widest possible autonomy within the Georgian state. “It is the blood spilled in the early 90’s war which separated us for ever,” he says, referring to the civil war after the Soviet Union’s breakup that led the regions of Abkhazia and South Ossetia to sever their ties with Tbilisi.

A mere seven days before the war Bagapsh appeared concerned about the growing tensions, but at the same time not really alarmed by the prospect of air strikes, or tanks and artillery full-scale operations. The US, he believed, would influence Georgian government and assure that war was averted.

And Russia? Was the Kremlin dictating to Sergei Bagaphsh what was to be done, and said?“

Russia has legitimate interests in the Southern Caucasus,” he replied. “Its presence here is not less justified than the American presence in the Central Asia republic of Kyrgyzstan. The Kremlin's major concern was peace and stability, he insisted. He added that often in Moscow officials asked him how they should react to Georgia’s hostile actions. He was not afraid of Russians, Bagapsh said; for years they had been -- and would remain -- Abkhazia's best friends.

Now he is short of time. His bodyguards wait for him in front of the exit from the presidential administration building. One of them loads the trunk of Bagapsh’s Toyota Lexus limousine with the bags with which he would fly to Russia.

A week later I am thinking Sergei Bagapsh must be relieved, as the Georgia-Russia war touched Abkhazia only lightly. His troops took advantage of the situation to push the Georgians out of the upper part of the Kodori valley. With the Russian units still present in the border Georgian town of Zugdidi it is easier for the Abkhazians to control the situation in the explosive Gali district, still inhabited by a population that is majority ethnic Georgian.

Perhaps now the international community that has ignored Sergei Bagapsh for so long will listen to him with more attention. My guess is that this former official of the Soviet youth organisation Komsomol will stick with the message he has delivered consistently for years: that there is no solution to this conflict that does not include his country’s complete independence.