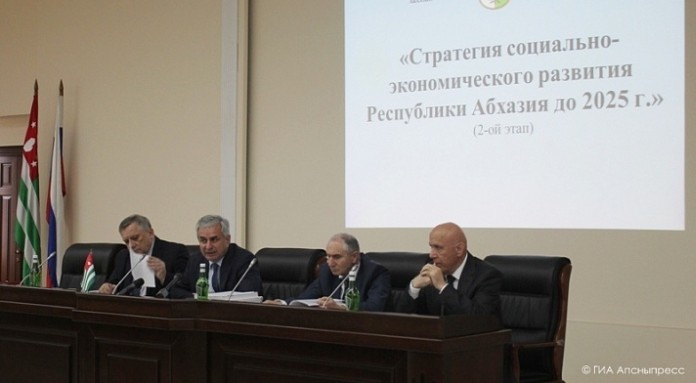 The discussion of the project was attended by parliamentarians, representatives of state authorities, local governments, community organizations and academia.

SUKHUM -- "This is a document that defines the main directions and possibilities of development of the state”, - said the President of the Republic of Abkhazia Raul Khadjimba. – “We are talking about strategic development. But we need to talk about more concrete program of action. It is necessary to determine the detailed plans that relate to the agricultural sector, tourism, development of the fuel and energy sectors and the infrastructure. In addition, it is important to develop an action plan in the social sphere, combining health, education, youth programs and social protection".

According to him, the Strategy will review tasks that "have not been solved all these years" for the first time, we need a separate program to provide housing for the population, as well as the need to work out the issues of preserving the country's ecology. And another problem, as emphasized Raul Khadjimba - is the reform of public administration, a constitutional reorganization of the local governance. "All these issues must be addressed together, as they are interrelated. We need to create conditions in which the society will live by rule of law", - said the head of state. An anti-corruption program should play a fundamental role in the creation of such conditions.

The main customer of the Country's Development Strategy is the Government of the Republic of Abkhazia. But the main task of the Cabinet of Ministers, according to the Prime Minister Artur Mikvabia, "is to determine the tactics of implementation of the programs".

Anticipating the discussion of the Strategy, the President of Abkhazia said: "We all should realize - we need to move away from the psychology of dependency. To continue to live as we lived the last few years - is impossible! Otherwise, future generations will be ashamed of the fact that their ancestors lost control of the country. "He cited the comparative characteristics of the economy of the North Caucasus and Abkhazia, "With a population of 477,000, Karachay-Cherkessia receives 5 billion of its own revenues, the rest comes from the federal center. Our citizens are less than half of this figure, and the budget is 3.5 billion. At the same time RA received assistance greater than the average funding for the republics of the North Caucasus. As a result, we just spend money without creating a product that will allow us to survive tomorrow".

Development Strategy 2025 is being carried out by the research team of the Center for Strategic Studies, involving scientists, leading specialists of the ministries and departments of the republic.

As the head of CSS Oleg Damenia, the second phase of the project has identified the following: strategic objective of the country, its model, the priority areas of the national economy which are agro-industry, tourism and recreation, and industrial complex as well as "support", transport and logistics, information -communications, cooperatives, construction, credit and financial systems.

The document also presents an analysis of the economy of the Republic, its strong and weak aspects, identifies competitive advantages, and restrictions, and threats to development.