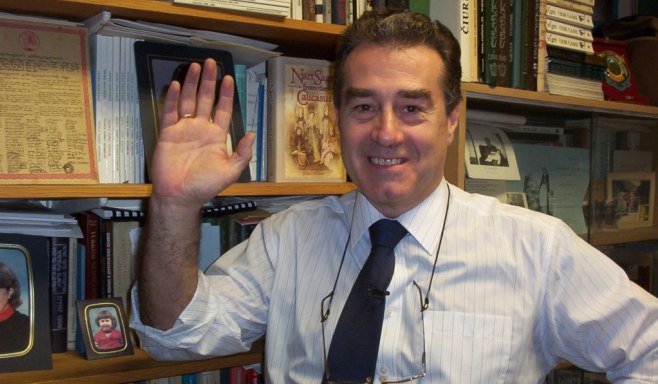 AW - You retired at the end of August 2015. This also means the end of Georgian/Caucasian Studies at SOAS. Could you please tell us the brief history of this post and how long you have been working at SOAS?

HEWITT - When Japan entered the IInd World War, the government/allies found themselves suddenly in need of experts in Japanese and other far-eastern languages, and it was immediately clear that there was a deficit of such knowledge. After the war ended, the British government decided to take precautionary measures to ensure that, if hostilities broke out again in certain parts of the world, expertise would be in place. And so, a number of Treasury Scholarships were set up. The arrangement was as follows. Talented language-undergraduates (especially at Oxford and Cambridge) were identified and made a most attractive offer: if they agreed to specialise in one of the oriental languages deemed to be of national importance, they were offered 6 years of tuition on a lecturer’s salary firstly with an appropriate tutor (wherever one could be found), whilst the final 2 years would be spent in the country where their language was spoken (or, if the country in question was closed, as in the case of the USSR, within a diaspora-community), and then, after the learning period was over, a lectureship was guaranteed. Since several (?the majority) of the languages concerned were in parts of the world that fell within SOAS’ remit, a number of such posts were established there. Such was the beginning of both Georgian and Armenian studies at SOAS. Both new lecturers were Cambridge graduates in Russian and, I think, German: David Marshall Lang (1924-1991 from St. John’s College) for Georgian, and Charles Dowsett (1924-1998 from Peterhouse) for Armenian. Dowsett stayed at SOAS until the Gulbenkan Foundation established the Armenian chair at Oxford in 1965, for Dowsett was offered the professorship. At that time Armenian was lost to SOAS — an attempt to revive it a few years ago failed. Georgian continued to be covered by Lang (as lecturer, reader and lastly professor) until his early retirement in the mid-1980s. After an interregnum, when the University Grants’ Council (applying the Thatcherite squeeze on universities) was closing small departments in the UK university-system, my own Linguistics’ Department at Hull was one to suffer this fate in 1988, at which moment I was transferred to SOAS. At first, I was half in the Linguistics’ Department and half in the NME Department, but from 1992 I was a member exclusively of the latter department. Thus, my tenure at SOAS was 27 years.

AW - What made you decide to retire?

HEWITT - Georgian/Caucasian Studies at SOAS have never attracted large numbers of students. Even after the demise of the USSR in 1991 and the (relative) opening up of the Caucasian regions (albeit plagued by various conflicts/wars, of course), interest did not blossom in the way that had been hoped. For several years SOAS benefited from a special grant from the universities’ funding authority (known as Special Factor Funding) to help sustain the employment of teaching staff in languages whose student-numbers would never be large enough to pay the relevant salaries. But this funding was withdrawn several years ago, and, as we all know, the budget especially for arts/humanities’ subject has not been strong over recent years. Given lower student-numbers than anticipated at SOAS (bringing in less in terms of tuition-fees than needed) combined with a severe reduction in research-funding over at least the coming 5 years, SOAS management decided to announce a voluntary severance scheme in the spring of of 2015. Since I turned 65 (the old, but no longer, obligatory retirement-age) in November 2014, I deemed it advisable to leave voluntarily now rather than face the ignominy of being compulsorily retired some time in coming months, an eventuality that could not be excluded in the prevailing climate.

AW - What do you think will become of Caucasian studies in the West?

HEWITT - Outside the Caucasus itself (perhaps we could say outside the former Soviet Union), although various scholars in this or that discipline have taken an interest in the Caucasus and made significant contributions to their respective areas of study, there have only been two dedicated posts for Georgian/Caucasian studies, viz. the one at SOAS and the one at Jena (Germany). The SOAS post disappears as of the 31st of August 2015. At the time of writing, the future of the post at Jena is in doubt… And so, one cannot but be pessimistic about the future of the academic study of this most fascinating of regions, as the world’s tensions continue to rise, not least in the Middle East, an area contiguous with the Caucasus, which is already plagued with growing Islamic problems of its own. So, this is hardly a time for academia to be cutting back on expertise (including linguistic) relating to the isthmus that stands at the interface of Europe and Asia.

AW - How about future of the endangered languages of the Caucasus?

HEWITT - There are some positive signs, such as the push to establish the teaching of some Caucasian languages (e.g. Circassian and Laz) in schools and at university-level in Turkey. And such communities as the Svans and Mingrelians, whose languages have no official status in Georgia, like Circassians in Turkey, seem to be making use of social-networking sites on the Net, which is most encouraging. One just hopes that local aspirations to preserve the language of this or that speech-community are not confounded by conflicts and/or the ignoring/suppression of minority rights by political élites in the relevant states.

AW - What are your future plans after retirements?

HEWITT - I shall continue with my academic writing in the same way and on the same topics as has been my practice while in employment first at Hull University (1981-88) and latterly at SOAS, now mercifully liberated from the mindless bureaucratic procedures which have come to play such a dominant role across the British university-system over the years. Specifically, I shall be gathering data for what I ultimately hope will be a large-scale reference-grammar of Abkhaz.

AW - What is the fate of your Caucasian books?

HEWITT - Over the years when I was welcome in Georgia (viz. 1975-1987) as a student of/specialist in the Georgian language, I made it my goal to acquire as many books (mostly in Georgian, but also in other Caucasian languages and in Russian) as possible just in case the Soviet authorities ever decided to reduce Georgia’s accessibility to Westerners; in this case, I would at least have many rare titles which could then be available through me to future scholars denied access to Georgia itself. Of course, history unfolded differently. After the appearance of my Open Letter to the Georgian People in July 1989 following the fatal clashes between Abkhazians and Kartvelians in Abkhazia on 15-16 July 1989, which criticised the explosion of nationalism amongst the Kartvelians, my relations with the Georgians broke down completely. With the dissolution of the USSR, Georgia actually became MORE accessible to outsiders, though it became effectively closed to me! As a regular visitor to the Republic of Abkhazia following the Georgian-Abkhazian war of 1992-93, my book-collecting has been based mainly on works published in Abkhazia (in Abkhaz or Russian) on various aspects of Abkhazian studies. My personal library ended up with many duplicates plus some works surplus to my requirements in retirement. And, since there was no room at home to accommodate such items, which for many years had been housed in my SOAS office, I put these items up for sale. The vast majority of the titles (books, newspapers, xeroxes, sound-recordings) were acquired by the Library at Santa Barbara University, whilst it remains my hope to arrange for my runs of scholarly journals to be sent to Sukhum as a gift to Abkhazia’s State Library, which was, of course, deliberately torched (along with the State Archives and the priceless Library of the local Research Institute during the afore-mentioned war) and which is thus in need of support to build up its store of holdings to aid with future academic research. Regarding the acquisition by Santa Barbara, see the public announcement at: