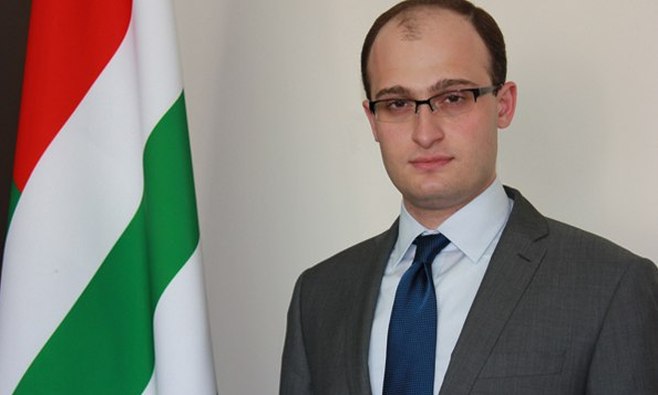 Interview with the Deputy Foreign Minister I.R. Khintba for the magazine “Kommersant-Vlast”.

How did the recognition by Russia affect Abkhazia?

The recognition has changed a lot. Beside that there were certain geopolitical changes related to the increased Russian influence in the Caucasus and the key problem of the physical security of the Abkhaz people was solved which we can see very vividly today. Due to significant assistance of Russia in rehabilitation of socio-economic infrastructure and other forms of the Russian financial assistance and examination of modernization of the Abkhaz legislation and the system of public administration we have managed to improve general situation on the country. Abkhazia has finally switched from the stage of survival to the era of development. We are developing ties with other countries which have established relations with us and are actively working on broadening the international recognition of Abkhazia.

Can you say that Abkhazia has established itself as a state?

We could say so even before August 2008. Recognition did not imply establishment of a new state but it was a statement of existing realities. For the first five years of independence starting from the 30th of September, the day of victory in the war with Georgia, we have created almost all institutions of a full-fledged state despite the post-war destruction and severe blockade by the CIS countries. This what makes Abkhazia different from Kosovo which was not able to overcome the condition of a failed state despite tremendous outside assistance. I often look at the political map of the world and wonder that many de-facto quasi states are UN members while Abkhazia which is hundred years ahead of these “chaotic societies” in its development is still unrecognized by the international community.

What threats is Abkhazia facing today?

These dangers inherent in any state, and they are associated with security, various crises - economic and political, as well as with the need to ensure the full development of human capital. At the same time, technically speaking Abkhazia has not come out of state of war with Georgia. Agreement on non-use of force has not been signed yet, although the Abkhaz diplomacy is making every effort in this direction. Despite the existing guarantees of physical security, Georgia is still perceived as a threat, not only military but also political, demographic and economic. Many people in Abkhazia are convinced that Georgia will try to undermine the statehood of Abkhazia and political identity of our people by hook or by crook.

At the Geneva discussions Abkhazia voices the necessary to sign the agreement on non-use of force with Georgia- and only then, in the opinion of the Abkhaz side, there will be sense in further negotiations. Georgia claims that, in principle, it is willing to sign such an agreement, but with Russia, as Moscow determines the policies of Abkhazia and South Ossetia. Do you agree with this statement?

Certainly not. Abkhazia does not match any definition of an occupied territory existing in international law. It was also proven by Minister of Foreign Affairs of Abkhazia Vyacheslav Chirikba at one of the information sessions in the framework of the Geneva discussions. We perceive this as propaganda cliches. Mikheil Saakashvili gave too many promises to his people, including the so-called restoration of the territorial integrity of Georgia, realizing the impossibility of that goal. How can he justify himself in the eyes of the voters? The best way is to blame the third party and in this case it is Russia, which allegedly impedes the solution of the Abkhaz problem. That is how the notorious concept of the Russian occupation was invented, which in reality means the recognition by the Georgian leadership of its inability to resolve the Georgian-Abkhaz interstate conflict and is caused by the desire to get rid of the responsibility.

Does not the Russian political and economic influence in Abkhazia make the latter a satellite of Russia?

Russian influence in Abkhazia certainly does exist. It is natural, since Russia is currently the only country in the world, which provides enormous assistance to Abkhazia, not only in socio-economic development, but also in strengthening and improving the efficiency of the Abkhaz state as a whole. It is some kind of "Marshall Plan" for Europe, as Russia is helping us to cope with the consequences of the war to strengthen the Abkhaz statehood as much as possible. All aspects of the Russian-Abkhaz cooperation are regulated by a solid contractual framework that exists between our two countries. And most importantly Russia's assistance to Abkhazia is legitimate because it does not contradict the will of the people.

Another thing is that we are not always able to meet professionally and institutionally the high level of inter-state relations with the Russian Federation. We are learning a lot but that does not mean that Abkhazia has turned into someone's satellite. If this is how to estimate the intensity of inter-state cooperation, then Georgia can be called a satellite of the United States, and New Zealand - a satellite of Australia.

As a successful independent project, perhaps we could name the repatriation of the Syrian Circassians, which you supervise. Did you coordinate the question with Moscow? Did Moscow approve such a strategy?

We have not coordinated the political part of this issue with anyone. Syria is home to more than a thousand of our compatriots, and the task of the Abkhaz state is to help them in the event of a severe humanitarian crisis. Immediately after the occurrence of the acute situation in Syria President Ankvab made a number of orders to ensure the repatriation process. The Government of Abkhazia paid for two charter flights from Beirut to Sochi. We acted here as any responsible government. Of course, solving the visa, transportation and logistics issues was impossible without the assistance of the Russian Federation. A lot of things in this situation depended on Russia: we would not have been able to technically as our compatriots are returning from Syria through the territory of the Russian Federation. And the support that was provided to us by our Russian colleagues at different levels was really impressive.

The project of the railway through Abkhazia to Armenia, which would be advantageous to Moscow has not been implemented yet due to the objections of Georgia, which considers it to be political. Tbilisi's position is the following: if this is an economic project, then Tbilisi should negotiate on the opening of the road with Moscow, and not with Sukhum, as Moscow joined the WTO with all the consequences. Do you think that this project Abkhazia itself needs this project? We do not yet have the required econometric and other calculations to clearly declare the commercial viability of the project. One thing I can say right now: if they ever decide to use the railway from Russia to Armenia the political and legal jurisdiction of the Abkhaz section of the railway cannot be the subject of speculation. This Abkhaz railway is the property of our state, and there cannot be any other opinion.

Did Russia's accession to the WTO damaged the economy or independence of Abkhazia?

No, the new context related to the adoption of Russia into the WTO did not affect the foreign policy activity of Abkhazia. Neither were the alarmist fears about the infringement of the sovereignty of our country as a result of the implementation of the relevant Russian-Georgian agreement justified.

Abkhazia has long historical and cultural ties with Turkey which is its neighbor across the sea. How are these relations developing? Can define them as partnership?

Our relations have existed historically and have been based on cultural, political and economic ties between Abkhazia and Turkey. The presence of more than 300 thousand representatives of the Abkhaz diaspora in Turkey, which largely preserved the Abkhaz language and tradition, cannot be ignored since it is a very important factor in our relations. We do not yet have formal relations with Turkey, which officially supports the so-called territorial integrity of Georgia and is a member of NATO. However, there are faint signs that Turkey is becoming aware of his growingly independent role in the region, which could result in less dependence on the prevailing geopolitical schemes and greater pragmatism in building relations with Abkhazia.

Is dialogue with Georgia possible? Do you see any prospects?

We are neighbors with Georgia. This is an inevitable geographical circumstance. Today, there is a wall between our nations, and it is not just physical and political, but also human. The whole generation of the Abkhaz people has grown up who only has approximate knowledge of Georgia and for whom the country is like Zimbabwe: both distant and obscure. Adults who have had the experience of coexistence with the Georgian people have no trust in Georgia at all. I believe that the only way to establish normal neighborly relations between our two countries is for Georgia to recognize Abkhazia's independence. If the Georgian authorities insist on the return of Abkhazia in Georgia today it will destroy the foundation of future good relations between our peoples and states. I am sure that prudent people in Tbilisi perfectly are aware of this.