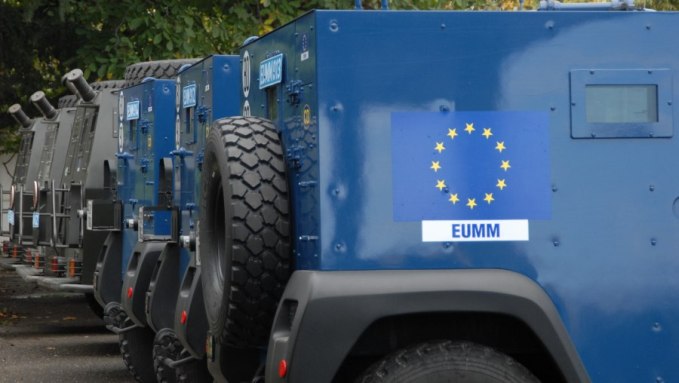 Demis Polandov, PRAGUE (Ekho Kavkaza) --- It is hard to call the decision by the Foreign Ministry of the self-proclaimed republic of Abkhazia to declare undesirable the presence at the Gal meetings of the head of EU Monitoring Mission, General Andrzej Tyszkiewicz a routine development. The previous leadership of the foreign ministry, despite its sometimes harsh rhetoric, never allowed the situation to reach boiling point. Abkhaz political analyst Arda Inal-Ipa, however, considers that this is not a change in policy vis-a-vis the West, but has to do with the person and actions of the Polish general. She expressed that opinion in an interview with Demis Polandov.

Demis Polandov: Arda, today the Ministry of Foreign Affairs of Abkhazia issued a statement declaring the head of the mission of European observers, General Andrzej Tyszkiewicz persona non grata in Abkhazia. This is a rather drastic solution, and I would say, unprecedented in Abkhaz policy. What do you think, how far is it justified?

Arda Inal-Ipa: I would not say this tough stance with regard to General Tyszkiewicz is on a par with the general attitude to cooperation with Europe. I can see that evaluations are being expressed that this means a change in policy, a toughening of Abkhazia’s policy towards Europe. I would not draw such conclusions. In fact, a lot depends on the individual. There was a time when Mr. Peter Semneby was involved with our conflict. And, despite the fact that he was by no means a pro-Abkhaz politician, his objective position did help the parties engage with each other and try to find common ground. It was while he was [EU special representative for the South Caucasus] that the approach of “engagement without recognition” was drafted and adopted. As for Haber [the first head of the EU Monitoring Mission in Georgia], I think he left completely objective. It is a pity that just when they begin to develop a deeper understanding deal of the situation, their mandate comes to an end. The inclusion in those structures that are engaged in [resolving] the conflict of representatives of those European countries that have undergone some historical trauma in relation to Russia - the countries of Eastern Europe, the Baltic states - seems to me counterproductive. The fact is that many of the issues that the Abkhaz representatives have tried to raise at the five-party Geneva talks did not, unfortunately, receive support from General Tyszkiewicz. On the contrary, the [EU] observers do not pay adequate attention to some serious concerns of the Abkhaz side, connected, for example, with the creation of new military structures in the Western Georgia, which many Georgian politicians have talked about. I think the Abkhaz have very serious grounds for protest.

Demis Polandov: But all the same, Arda, Alexander Ankvab’s manner of communicating is very different from that of Sergei Bagapsh, and his quite tough statements to the effect that it is pointless to meet with visiting EU representatives and ambassadors were addressed not to General Tyszkiewicz but to European diplomats.

Arda Inal-Ipa: Yes, the statements are tough, but that’s as far as it goes: meetings are meaningless, we do not see any progress, but we have no choice and we will continue contacts. Indeed, despite the fact that there were some emotional reactions, proposals, for example, to receive only those diplomats who come from the Russian side [meaning who are accredited in Moscow], or not to receive at all diplomats working in Tbilisi - this is not in fact happening. Germany’s ambassador to Georgia is currently in Abkhazia and conducting high-level meetings. It is after all necessary to separate rhetoric from genuine policy.