ABKHASIA is a somewhat undefined strip of the country lying between the great Caucasian Mountain range and the Black Sea, west of Swanetia and Mingrelia. It is rich in fertile soil and forests, but the inhabitants are too inactive to reap the benefits and advantages conferred upon them by Nature.

Under Russian dominion since 1823 (their last ruling Prince-Michael-having solicited a Russian occupation of the country), they have in no way profited by the protection of a civilised government, while their neighbours, the Mingrelians, have prospered in wealth and education.

From 1771 to 1823 the Abkhasians were independent, but they failed to better their lot as an independent race, as they have failed to do as the subjects of an Empire which, to quote a hostile witness (Mr. Oliphant) “has improved the material condition, and developed the internal resources of the country.” In 1862 a deputation from Abkhasia came to England to implore the protection of the Queen of Great Britain against Russia; that is to say, against a Power which took Abkhasia under its sway at the express desire of the last ruling Prince of this territory.

That Abkhasians should want to get rid of the Russians is not surprising. Doubtless, in the same way some of H.B.M.’s subjects would like to see the backs of the redcoats. But it is better for the world at large that Providence has ordained the subjugation of tribes, whose hand is against every man, to an authority which exact and enforces observance of laws, and respect of property.

Recent events have shown that the Abkhasians as yet have no idea of either. That is why they welcomed the Turks, - they saw a way to escape from the restrain imposed by Russian rule upon their brigand instincts.

But when the Osmanli tried to subject them to the simplest discipline of warfare, they at once quarrelled with their allies. The latter, however, executed the disaffected among them, so that they found they had fallen out of the frying-pan into the fire.

Five months ago they were living peaceably enough. Then a few emissaries of Turkey came into their country endeavouring to encourage discontent and rebellion, and in May the uprising of the Abkhas tribes took place, and Turkish troops disembarked at Soukhoum Kaleh.

If the Turks reckoned upon the Swanetians, Ossetes, and Karatchai mountaineers joining them on their landing, they were counting their chickens before they were hatched, and might have known better for 1856 the Mahommedan tribes of the Caucasus gave no assistance to Osman Pasha, whose expedition to the Caucasus was as great a failure as the present one.

It may be surmised that the Abkhasians only joined the Turks in the hopes of plenty of plunder, for, when they discovered that the Nizam troops kept the boots, they thought about saying good-bye to their friends from over the sea as quickly as possible, and began to treat with Prince Shernoseedje, the hereditary Prince of Abkhasia, a faithful subject of the Emperor of Russia, for their return and submission to the Czar.

However, when the Turks withdrew from the Caucasus, many of them, fearing the just wrath of the Russians, left their country, which has been dreadfully devastated and despoiled in the last few months. Soukhoum Kaleh, amongst other places, is a heap of rubbish.

The Abkhasians are of a repulsive, savage appearance, neglectful of their person, and without much, if any, notion if religion. They wear the common Caucasian woolly peaked hat (papakha), and the thick, shabby, sheepskin cloak (bourka), and live principally on lavàshi cakes made of maize, salted cheese, beans, fruit, and hanseli, a kind of leek which all the tribes of the Caucasus are fond of. They inhabit either underground hovels (saclas), thatched with twigs and straw, or huts raised on poles above the ground. 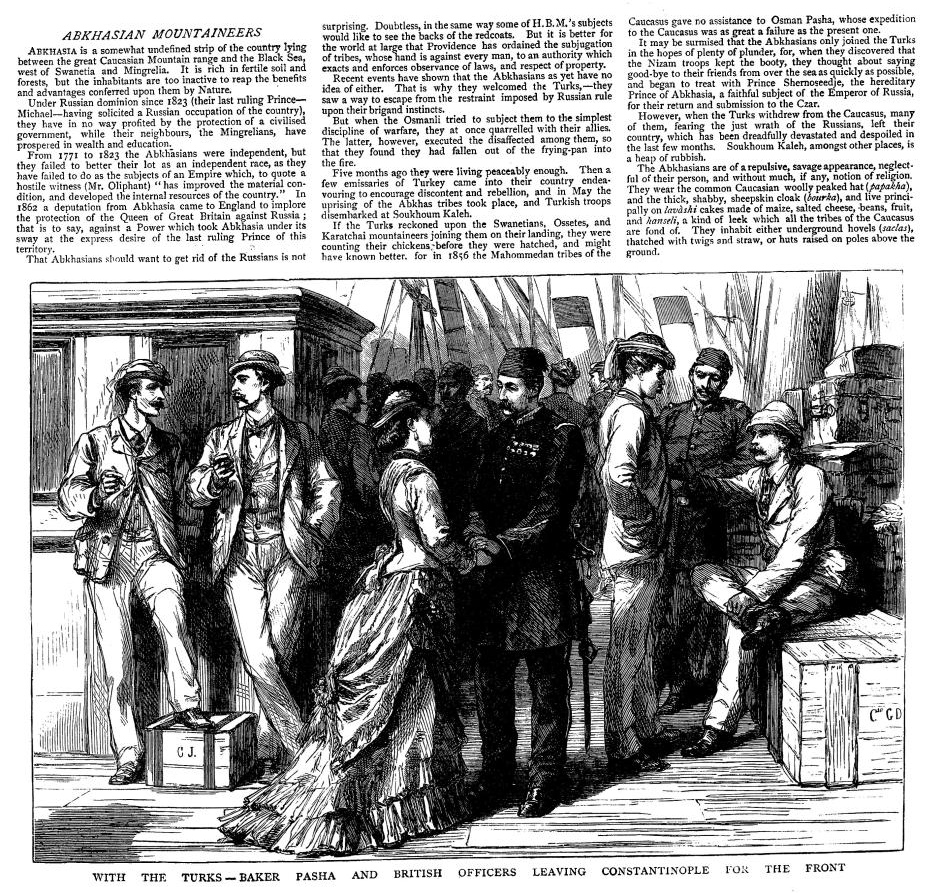