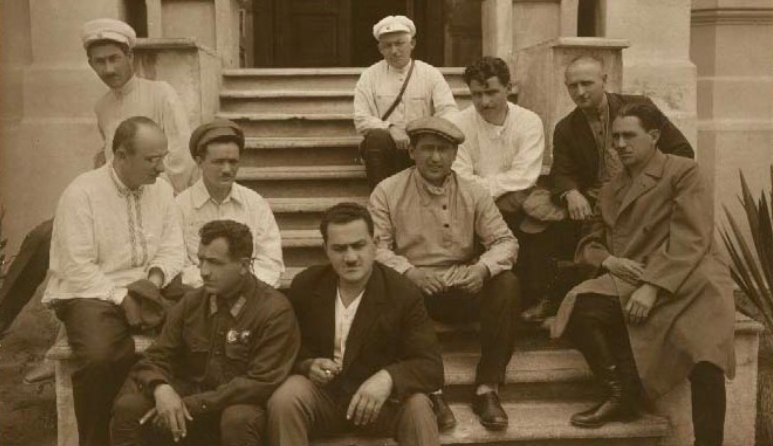 Above: L. Beria, N.A. Lakoba, and V.D. Lakoba on steps of Smetsky family dacha. L.P. Beria (middle row left, in peasant shirt and pince-nez) speaks with N.A. Lakoba (next to Beria, in white shirt and peaked cap). District militia head V.D. Lakoba (in military uniform with badges) sits on the lowest step on the bottom left. Abkhazian District Party Committee (Obkom) Chairman V.K. Ladariya is furthest to the right (in grey overcoat and tall boots). The photograph is from the early 1930s, most likely 1930-32, and was taken on the front steps of the former Smetsky family dacha, a prestigious guest house in the Soviet period and currently a residence of the President of Abkhazia.

This week, All the Russias is delighted to feature excerpts from Timothy K. Blauvelt’s Clientelism and Nationality in an Early Soviet Fiefdom: The Trials of Nestor Lakoba, from Routledge. The below segment derives from the book’s introduction.

Timothy K. Blauvelt is Professor of Soviet and Post-Soviet Studies at Ilia State University in Tbilisi, Georgia, and also Regional Director for the South Caucasus for American Councils for International Education.

Informal Networks, Nationality, and Soviet Power in the Periphery

From the earliest years of Soviet power, informal networks played an important role in enabling the Bolsheviks to exercise their authority throughout the USSR. As the political scientist Gerald Easter has observed, given the weakness of the formal institutions of the Party and state and chronic shortages and inefficiencies in the formal administrative-command structures, especially in the periphery, the relatively small group of Bolshevik cadres, vastly outnumbered by the local population, used their personal connections with each other to exchange information and allocate resources in order to establish control and implement the policies and directives of the center. Many among this cohort of cadres developed a sense of identity and cohesion through the shared experience of the pre-revolutionary Bolshevik underground and the Civil War, and they used this interpersonal trust and mutual support in order to consolidate their hold locally, fend off potential local rivals, and facilitate contacts with superiors in the regions and in the center. Powerful figures in the center, in turn, used their patronage resources to cultivate local cadres, who could use this support to enhance their patronage machines on the local level that could in turn back the central elites, linking together local networks to form powerful vertical networks bonding the periphery with the center.

Thus, with a vast territory to control and a small number of trusted cadres in the periphery, in the new “national” republics of the emerging ethno-territorial system, the Bolshevik central leadership had to empower reliable client groups in each of the territories in order to implement policies and carry out their directives. Given the fundamental principles of Bolshevik nationality policy in the 1920s, local client groups should be convincingly representative of the “titular” nationality of the territory. In addition to implementing the center’s policies, these local national client groups were essential both in conveying the values and goals of the regime to the local population and in preventing the emergence of rival ethnic elites with a national or political agenda threatening to Soviet power. From the perspective of the local elites, to successfully accomplish their own goals, while maintaining the confidence and trust of their higher-ups, they needed to recruit local clients and maintain their loyalty in turn; this could be accomplished through offering and providing material rewards, aspirational and status awards (such as positions, choice accommodations, Party membership, and the access that this provided) and also through demonstrating loyalty to them when they needed it. The challenge for local national leaders was to create a cohesive client network of their own that could fulfill orders and at the same time coopt and/or exclude potential local rivals, while maintaining the support of the local constituencies, both within the elite networks and among the local population. An obvious problem in recruiting reliable local clients is that one’s most trusted vassals may not always be the most qualified candidates or those with the most clout within the community, but rather chums, relatives, and other “lackeys” of various sorts. Yet if one was to manage a successful local national patronage group, one needed to sufficiently coopt and reward both local and kinship groups as well as other local elites (or potential elites) at further remove who had authority and respect in the community, and to do this with often limited patronage resources to distribute.

Patronage-client networks in essence involve an exchange of services: personal loyalty and support for the patron in return for advancement, tenure in office, and access to all of the benefits associated with position for the client. The connections involved can run the gambit from outright nepotism to loose alliances based on shared interests. Patronage becomes particularly critical in Communist party states, where the regime has nearly complete control over resources and their distribution in an economy of deficit. Describing Communist China, Andrew Walder pointed to the “unintended social consequences of the party’s ideological orientation,” in which loyalty and ideological adherence was exchanged for preferential treatment in career opportunities and other rewards: “The result is a highly institutionalized network of patron-client relations that is maintained by the party and is integral to its rule: a clientelist system in which public loyalty to the party and its ideology is mingled with personal loyalties between party branch officials and their clients.” In the Stalinist system, the Party and the state had a near-monopoly on the production and distribution of goods, was the sole employer, and aspired to regulate the lives of its citizens through demanding extensive documentation and paperwork. All of the necessary and desirable things in life required interaction with officialdom: trade, travel, securing an apartment, applying to university, going on vacation, getting married, etc. At the highest level of the political system, informal structures of authority were crucial for what Robert V. Daniels described as the “circular flow of power,” in which the central Party secretariat and the General Secretary held hierarchical primacy over local Party organizations and the appointment of local Party officials through the nomenklatura system. Stalin and his successors at the top of the structure appointed those below, who in turn formally voted for their patrons at the top. Indeed, Stalin’s power derived in large part from his authority to promote local cadres, to remove unsatisfactory clients through the use of “party discipline,” to rotate cadre assignments between center and periphery, and to send lieutenants from the center to deal with problems in the regions. Paradoxically, though, the very same local patronage networks that were empowered through this approach could, in the longer term, come to restrain the authority and will of the center.

The policy of the Party and the Soviet state toward national (or ethnic) identity in the Soviet Union added a further element of complexity to Bolshevik institutionalized informality. Based on decrees taken at the 10th and 12th Party Congresses in 1921 and 1923, the Bolsheviks put aside their ideological distaste for nationalism and attempted instead, for tactical purposes, to use the emotive force of nationalism to their advantage by conceding what they viewed as the symbolic elements of the “form” of nation to the ethnic (or “national”) groupings. This included encouraging the development of local languages and of literacy, education and literature in those languages, folklore, culture and the arts, and also giving preferential opportunities in hiring, higher education, and Party membership for the nationalities. Referred to as “indigenization” (korenizatsiya), this “affirmative action” approach in effect involved either co-opting the local national elites or creating them where they hadn’t existed before. The Bolsheviks also decided that the future Soviet state would take a national federal form, with (most) territories defined nationally, resulting in an ethno-territorial system in which nationality (ethnicity) would be linked both to the individual and to the various territories. The local leadership of each territory was to be comprised of (or belong to) the “titular” nationality for which it was name (one scholar has recently suggested that “entitled nationality” may be a more apt term). A titular nationality in a given territory could in fact comprise only a plurality or even an outright minority (as in the case of Abkhazia) of the population of that territory which bore its ethnonym. In the words of another recent summation of Soviet nationalities policy, “[t]he USSR institutionalized ethnicity in a federal structure that enshrined the paradoxical combination of ethnic and civic nationalism in a manner that determined access to scarce resources and life chances.”

Clientelism and Nationality in an Early Soviet Fiefdom: The Trials of Nestor Lakoba