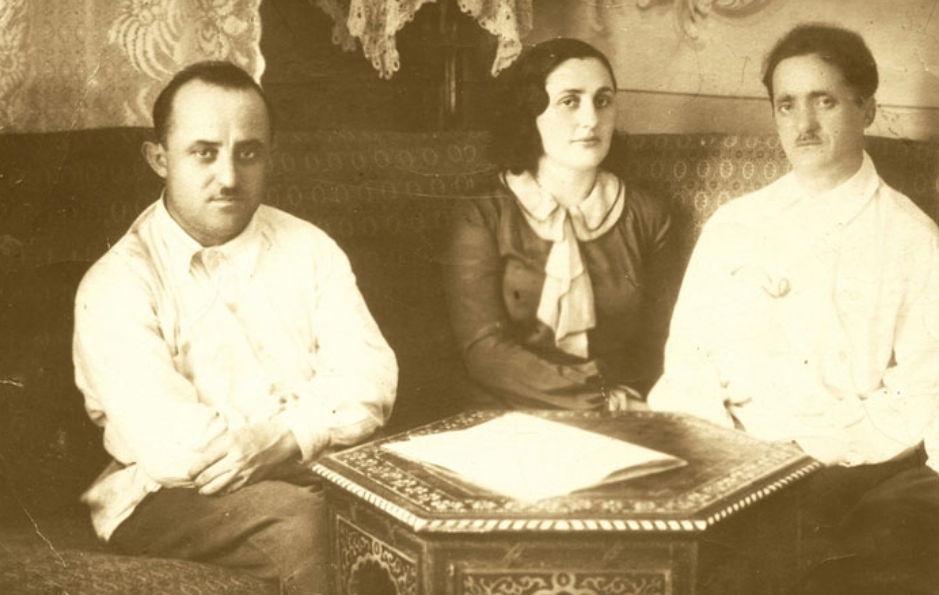 Ekho Kavkaza -- There is simultaneously a tragic and heroic page in the history of Abkhazia. This is the fate of the famous statesman of Soviet Abkhazia - Nestor Lakoba and his family, which was destroyed by the organs of the Soviet NKVD. The tragic and equally incredible heroism of the story is presented in the personality and fate of Nestor's wife, Saria Lakoba (1904-1939). She died exactly 80 years ago. Yesterday, a memorial evening dedicated to her was held at the Russian Drama Theatre. The theatrical production was scripted by the famous Abkhazian historian Stanislav Lakoba and Irakli Khintba, director of the Russian Drama Theatre. The stage-director was Dzhambul Zhordania. After the presentation, we talked with Stanislav Lakoba about the fate of Saria and her character, about the repressions, victims and executioners.

Elena Zavodskaja: Tell me, what did you want to invest in this scenario? To convey what to the public?

Stanislav Lakoba: I wanted to show a person, a personality. Despite the fact that she did not hold any posts in the government, she was a woman, she was a mother, she was a wife, she was a great friend and human being.

At the same time I wanted to show something of the colour of that epoch — I have in mind the writers who noted the particularities of Sukhum (Abkhazia) in the 1920s and 1930s, and it sounded really wholesome! Babel, Mandelshtam, Marietta Shaginjan, a poem by Semjon Lipkin and Mandelshtam's poem on the death of Nestor Lakoba “Abkhazian song”; I think that all this created a certain atmosphere. And, interestingly, the acting company took all this on board; they literally did it all in 4-5 days. And I am very grateful to Irakli Khintba, the General Director of the theatre, for treating everything like that because there was a period when we were with his grandfather Zakanbej Mikanba, an engineer who knew Rauf (son of Nestor and Saria Lakoba) very well and was friends with him; he also studied together with Saria’s brother, Musto; he travelled to Batumi with us in the early 1980s to obtain their family-archive. And I  had the thought that we could not mark this date in some formal manner, you see! Neither a round table, nor some speeches, nor meetings were what was called for  — it was necessary to come up with something out of the ordinary. And I decided that this could be achieved courtesy of the forces of the Russian Drama Theatre.

EZ: In your opinion, what does this woman mean for our history, for Abkhazia? What is her significance?

SL: Well, you see, it is very important that here, in the foyer, there are a lot of documents and photographs, and in them there are a lot of women, magnificent women. And they all suffered; they were either destroyed or imprisoned in the years of the Great Terror. Thousands of fates of people in Abkhazia were crushed. Not only women — children were killed, shot. I think the most important thing is that this does not happen again. And this is what was declared here today. This is the worst thing that can be! In fact, it was the genocide of a people, not only of the Abkhazians, but in general, there was such a situation in the country when millions of people suffered. And there are special studies that directly state that in the territory of the Georgian SSR it was the Abkhazians who proportionately suffered the most.

EZ: Do you have these data? How many people were repressed, how many were shot in Abkhazia?

SL: Well, I’ll tell you this: 52% of the repressed in Abkhazia were shot, something which was attested nowhere else. There is evidence that in 1937 and 1938 2,186 people were repressed.

EZ: You worked with documents, what was it like? You couldn’t sketch a portrait of Saria, could you?

SL: According to documents, the investigative actions, as to how she was tortured and what was done to her, it’s all horrendous; it’s just impossible to read! There is eyewitness-evidence read here. Adile Abbas-oglu and other women who were in prison with her talk about it. She was a woman of amazing spirit, beautiful not only externally, but also in her internally —  she was very strong and beautiful. How can I describe to you if in front of the mother’s eyes they torture the son, and vice versa, but she keeps on ... Well, it ended with what it ended: the last interrogation was in February 1939. That was it. Then she goes to hospital and dies on 16 May 1939.

EZ: How much time did she spend in prison?

SL: According to the documents, she was arrested on 23 August 1937, but apparently her details were retroactively entered by the NKVD. Generally, the date of the 20th August is given. And it is no coincidence that Beria's note to Stalin is dated 20 July 1937, where he reports to Stalin that the family of Lakoba, who himself had already perished, is under high suspicion, that’s to say his wife and mother, and that they need to be arrested. And on 13 August he receives a cipher-telegram from Stalin, where he approves this note and says that everything needs to be carried out, as reported, and so on. And it was on 20 August that she was arrested.

EZ: Where was she kept?

S.L .: They arrested her in Sukhum then transferred her to Tbilisi. She died in the Ortachala Tbilisi Prison Hospital. As for their son Rauf, he was imprisoned in Sukhum and was then transferred to Moscow. And here we have the infamous affair of the Abkhazian youths, when in 1941 on 28 July the son of Nestor Lakoba, the son of Mikhail Lakoba and the son of Vasilij Lakoba were all shot on a single day.

EZ: How old were they?

SL: When they were arrested, they were 14-15 years old. When they were shot, there were already older — the son of Vasilij Lakoba was 17 years old when he was shot. And it was by the personal order of Beria that this was done.

EZ: Stanislav, has history preserved the names of Saria’s tormentors and investigators?

SL: Yes, of course, they are all listed in the documents. We have Goglidze, People's Commissar of Internal Affairs of Georgia, who in December 1953 was himself shot in Moscow. We have Davlianidze, investigator Khazan, and there was even a woman, Anna Kilardzhishvili, who tortured her... We have Kabulov, Kadagishvili, Savitskij, Golovanov - all of them Beria’s closest assistants and sadists the lot. You see, as investigator Khazan testifies: “I know that women were beaten in just the same way as men.” Such was how they later testified already in the 1950s when under interrogation ...