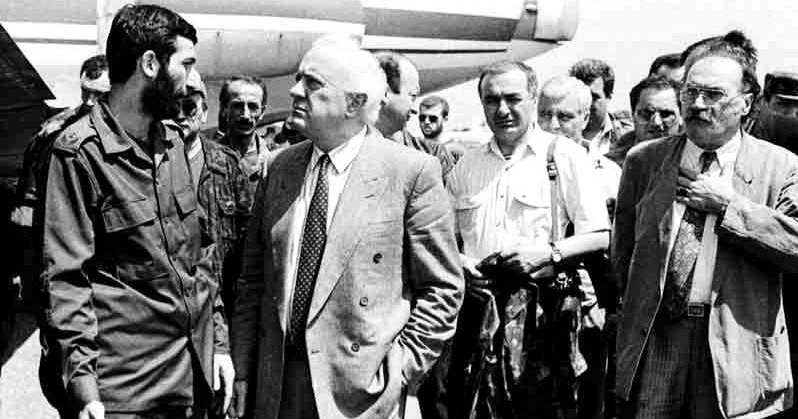 As the high hopes for a New World Order arising from the ashes of the Cold War crumble, 'ethnic cleansing' looks set to be the hallmark of the 1990s, with old nationalist scores being settled free of the restraining hand of the superpowers or of tough Communist regimes. The attention of the European Community has necessarily been focused on the situation in the territories of what was Yugoslavia, for the turmoil in the Balkans is uncomfortably close to home. But apart from the continuing crisis in Nagorno-Karabakh, relatively little attention has been paid to the situation in Transcaucasia and, in particular, Georgia, which declared its independence in April 1991. The granting of sovereignty has been seen as a universal panacea for the problems consequent on the breakup of the Soviet empire. But this can have dire consequences for minorities, as the current crisis in Abkhazia demonstrates.

On 14 August Georgian forces launched a fierce ground and air attack on Sukhumi, the capital of Abkhazia, one of two autonomous republics within Georgia. The ostensible pretext was that the Mingrelian kidnappers of the Georgian Interior Minister, Roman Gventsadze, had spirited him into Abkhazia with the connivance of the Abkhazians. The kidnapping had been carried out by supporters of Zviad Gamsakhurdia, the demagogic but none the less reasonably democratically elected President of Georgia, who had been overthrown in last January's dramatic fighting in Tbilisi, the Georgian capital.

Gamsakhurdia, himself a Mingrelian and now in exile in Grozny, the capital of Chechenia, still enjoys considerable support in Western Georgia, or more particularly Mingrelia, which has been in turmoil since his overthrow. Indeed, Georgian heavy-handedness has prompted a growing number of Mingrelians (who have their own language and represent approximately a fifth of the total population of Georgia) to think of themselves as constituting a distinct ethnic group. The Abkhazians have little reason to align themselves with an arch-nationalist such as Gamsakhurdia (who has described them as 'agents of Moscow, instructed to kill innocent Georgians') or to take sides in what is essentially an intra-Georgian quarrel.

The article in PDF can be downloaded by clicking here (2.2 MB)