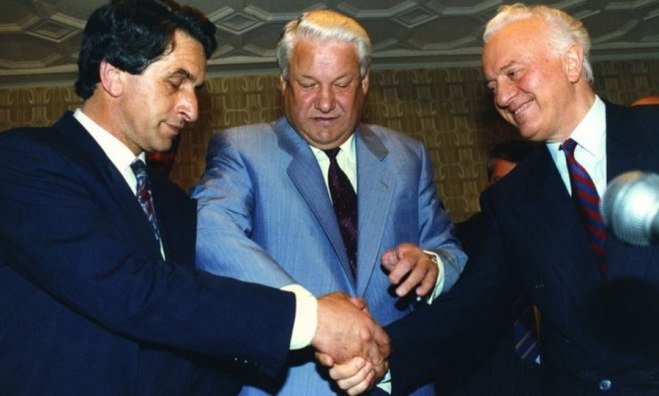 The dissolution of the USSR at the end of the Cold War brought new challenges to the Caucasus. The former republics of Soviet Transcaucasia immediately became international actors which identified their own national interests and foreign policy priorities. The formation of independent states in the South Caucasus has been accompanied by a search for new mechanisms to ensure regional security and enshrine new formats of international cooperation. The newly independent post-Soviet states are, however, not the only product of the collapse of the USST. One of the major consequences of this process was the appearance of entities that have also declared their independence and sovereignty but not obtained UN membership and full-fledged international recognition even though they were able to defend themselves through armed confrontation as well as bloody conflicts.

Abkhazia has become one of the most interesting cases of de facto statehood building in Eurasia. More than twenty years ago, in August, 1992, it was drawn into an almost 14-month-long conflict with the Georgian government and local paramilitary forces. Since 1993, September 30 has traditionally been celebrated in Abkhazia as Victory Day. On that day, the Abkhaz armed forces and volunteers from the Confederation of Mountain Peoples of the Caucasus drove the Georgian troops and militias out of most of the Abkhaz Autonomous Soviet Socialist Republic. For Tbilisi, that meant the loss of jurisdiction over part of its territory recognized de jure as formally belonging to it. For Sukhumi/Sukhum, in contrast, it marked the beginning of its campaign to secure international recognition. For the whole intervening period, Abkhazia’s leaders pursued that objective in the face of controversial inter-action with the “mother state” and adverse external influences. In August 2008, Abkhazia obtained the first recognition of its independence. While the huge role played by Moscow in the transformation of the GeorgiaAbkhaz conflict needs to be recognized, the “hand of the Kremlin” was not the core prerequisite for it. The most important reason for it was the desire of the Abkhaz elite to determine the status of the former Abkhaz Autonomous Soviet Socialist Republic outside the framework of the Georgian independent state.

A modified version of this chapter was published in Abkhazia: Between the Past and Future (2013). Ed. by Islam Tekushev, Sergey Markedonov and Kirill Shevchenko. Prague. Medium Orient, pp. 16-64.