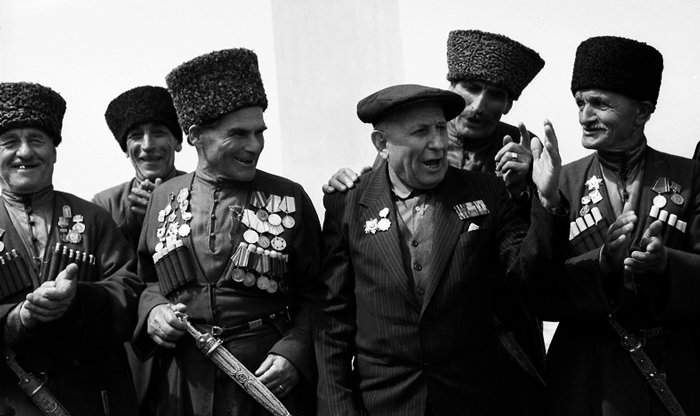 When I first visited Abkhazia in June 2003, I witnessed one of the strangest countries I had ever seen. I had been to other countries marked by war, to Chechnya and Afghanistan.

There however the war-torn places were part of internationally recognised states and could rely on internal and external help. The ruined cities and villages of Abkhazia can expect nothing of the sort. I was visiting a land with no mobile telephony and with no petrol pumps. Petrol was filled into frail cars from road tankers, with the aid of hoses. Many people, especially the elderly, were scrawny and undernourished, many were dressed very modestly. Even Vice Premier Vladimir Zantaria, who picked me up from the border, only had an old Volga as his official car.

Despite the poor standard of life, I did not meet a single Abkhazian who considered conceivable what all western politicians were demanding: to rejoin Georgia. Time and again I asked Abkhazian interlocutors whether they could imagine under any circumstances existence as an “autonomous republic” within Georgia. An old Abkhazian woman at the market of Sukhum gave me an answer I shall never forget: “Again with Georgia? Not even our dogs will survive that”. Her answer gave me an inkling of what had passed here ten years before.

The Republic of Abkhazia was not a sovereign state, recognition by Russia or even by other states was not in the picture in the Summer of 2003.  But nevertheless, the Abkhazian people had decided its path with internal sovereignty, thereby accepting many hardships. Ignored by the world, a republic had come into existence here with all the attributes of state: a government and a parliament, police and army, local administrations, schools and a university, and Abkhazia wanted to be a democracy. The effectively organised Ministry for Foreign Affairs immediately helped with organising talks, also with members of the opposition and with critical journalists. Vitali Sharia, editor-in-chief of the newspaper “Echo of Abkhazia”, surprised me by wearing a t-shirt depicting the silhouette of Hamburg. He had been hosted there for talks with Georgians organised by a peace studies scholar. Straight away there were two things I was able to deduce from that: 1 The Abkhazians are quite willing to hold talks with the Georgians, two Europeans, Germans included, are welcome as mediators.

At a newspaper stand next to the memorial for the fallen of the 1992/93 war, I bought Sharia's book “The tank is not more horrible than the dagger”, tales superimposed on the background of real episodes of the war, which the Abkhazians call the “patriotic war” – a war that holds a similar importance for the people as the Second World War for the Russian people. Because almost every family saw one of its members die in the war. Sharia's book, thus far only published in Russian, would have deserved translation into other languages. It is a unique literary document for understanding Abkhazia.

It also became visible for me that Abkhazia does not just have debate-happy coffee drinking democracy, say at the “Brekhalovka” at the promenade in Sukhum, but also political abysses. In the wall of the office of the erstwhile opposition organisation “Amtsakhara” (fire of the ancestors) there was a glaring hole, torn open by an explosive device. It was impossible to ignore that Abkhazia was a post-war society where some still wanted solve political problems using violence. This was compounded by the fact that at the time, a power vacuum could be felt in the republic. The first President Vladislav Ardzinba was already very ill. I too could not meet him, whereas Prime Minister Raul Khajimba immediately had time, even on a Sunday.

When five years later, in the May of 2008, I once again traveled to Abkhazia, in some ways the situation had improved. There were petrol pumps and mobile telephony, in Gagra hardly a trace of the war was still visible. Foreign Minister Sergei Shamba said that Russia was building “practically inter-state relations” with the republic. Abkhazian insistence and the confrontational course of US-armed Georgia had induced Russia's quite risk-averse leadership to eventually and unspectacularly help the small country, including financially. But diplomatic recognition was still not in the picture.

Vitali Sharia was quite clear during my visit in 2008 that despite all their gratitude for the Russian help, the Abkhazians do not see themselves as a meek outpost of Russia: “We are no pawns of Moscow, our society is developing” – The Abkhazians witnessed with attention moments of stagnation and democratic deficits in Russia. The private TV channel Abaza-TV also contributed to a greater diversity of opinions. There political issues were debated more frankly than the correspondent from Moscow was accustomed to from the channels of the Russian capital.

During a visit to a tank battalion near Ochamchira, I realised that in the worst case scenario of a military conflict Abkhazia would only be able to defend itself to a very limited extend without Russian help. There young soldiers were driving a more than 30 year old T-55 tank in front of a building burnt out in the 1993 war. As impressive as the soldiers, prepared to defend their native land with outdated military material, were the students at the university of Sukhum. The independence of Abkhazia was as self-evident to them, who had grown-up in their republic, as the wish to travel to Europe for internships – something thus far made impossible by the refusal of EU countries to grant visas to Abkhazians. Half a year earlier during the Georgian Presidential election I had seen in Tbilisi a propaganda movie by Saakashvili's party. In it, elegant Georgian women mounted a train “headed for Sukhumi” – propaganda does not come further from reality than that.

Compared with 2003 I saw more confident than merely worried faces at the Ministry for Defence in Sukhum in the Summer of 2008. The building was being renovated, the Abkhazian army had employed experienced trainers from Russia, who quite probably hadn't come to Abkhazia merely on their own initiative. However, in May 2008 as in 2003 fear could be felt amongst civilians that war would once more beset this coastal land. Some hesitated to refurbish their home, to open a store – what would become of it if tomorrow war breaks out? Spoken and unspoken this question was omnipresent, affecting the attitudes towards life and spirits of the people.

In the August War of 2008, the Abkhazians were spared new victims partially thanks to the military protection by Russia and the presence of Russian soldiers. The recognition of the republic by Russia opened a new chapter in the history of Abkhazia.

The Abkhazia, which I experienced in June 2009 during my third trip, had gained not just formal sovereignty. Vitali Sharia condensed the consensus amongst his compatriots into  one phrase thus: “Life forces us to take a pro-Russian stance, but we don't do this blindly”. His editorial board has just relocated, to a modest but better accommodation. The rickety official Zhiguli had stayed, with its patient driver, whereas Abkhazia's government officials had traded their Volgas for heavy Jeeps produced in the west.

Georgia had failed to win over even a minority of Abkhazians to join its state. Vitali Sharia explained why with a short look back: “The atmosphere since the war of 1993 has removed the foundation for any collaboration”. Stanislav Lakoba, then Secretary of the Security Council, phrased it less diplomatically: “The Georgians don't have a fighting spirit, they're no fighters” and added with a sarcastic smile: “The smaller the people, the longer the dagger”.

The US steel helmet on top of the TV set in the office of major-general and Deputy Chief of Abkhazia's General Staff Garri Kupalba was symbolic for what the small Abkhazian people had achieved. The helmet had been carried off by Abkhazian soldiers in the August of 2008. At the time they took over control of the Kodori Valley, which had been occupied by Georgian forces in contravention of the 1994 cease fire agreement. The former teacher surpised me with his cheerful and unmilitarily loose manner and his boyish mischievous smile. The teacher in his general's uniform was representative for a small people's army, that had been victorious over the army of an ally of the US empire. For at the borders of Abkhazia, the US, a power foreign to the Caucasus, had failed.

It was also a type of romanticism made of steel that enabled the victory of the Abkhazians over their enemies. A lot of this spirit could be felt when I was a guest of the writer Gennadi Alamia in June 2009. He maintained contacts with the Abkhaz diaspora, especially in Turkey. The author of the national anthem of Abkhazia is Secretary-General of the international organisation of Akhaz-Abaza peoples. In his living room, among expressionist paintings of the Black Sea coast and one Abkhazian and one Russian flag above the fire place, he told of the war years of 1992/93. At the time, he mobilised volunteers from the North Caucasus to Abkhazia. Alamia, a graduate of the Moscow Institute for Literature, is like most Abkhazians also a citizen of the Russian Federation. But his world view is not that of the Russian capital. “I think in Abkhaz first”, says Alamia, and he criticises the Caucasophobia that is widespread in the Russian society. He complains that for example, Chechens are often “depicted as man-eaters” in Russia. He even claims to have got to know the Chechen leader Shamil Basayev, later mutated into a terrorist, “as an intelligent, rationally reasoning man” at the side of Abkhazian independence fighters in 1993. Alamia sees me off with a confession: “We don't want to be a colony, but a free, independent country. We need people who consider this ground as their native country, and we don't want to dissolve into humanity at large.”

“This here is the Caucasus, here one should behave accordingly”, said President Sergei Bagapsh to me during an interview in June 2009. I didn't foresee that this would be our last conversation. Impressive about him was his level-headed, calm manner. He could be angry, but he always tried to keep this anger under control. He called the Georgians “a talented people”, with a view to the long-term neighbourhood but not under the illusion that reconciliation would take place soon. Sergei Bagapsh was primarily a realist, and the recognition by Russia did not cause him to underestimate the internal problems of his small country.

I had sat several times across Georgian President Mikheil Saakashvili, listening to his fantasising about a “re-unification” of Georgia with Abkhazia. No two statesmen could be less alike than Bagapsh and Saakashvili. If evidence was still required that here two peoples with contrary national characters stood opposed to one another, it was expressed in these two personalities. The only thing that worried me during the conversation was Bagapsh's health. For the President was smoking incessantly, as if with every breath he wanted to relieve himself a bit from the pressure that he was permanently exposed to, by enemies  and friends alike.

Walking through Sukhum in 2009, at first sight one could see that a new Abkhazia was taking shape. More than ever before, houses were being renovated and extended, the promenade “Naberezhnaja Maxadzhirov” ("Embankment of the Exiles") had been renewed, freshly lacquered wooden benches stood were previously potholes had been. However, the most crucial change was detectable in the faces of people and in conversations. The fear that tomorrow might bring war once more had disappeared from them.

Uwe Klussmann has been correspondent for the magazine “Der Spiegel” in Moscow from 1999 until 2009. During that time, he travelled to Abkhazia thrice.