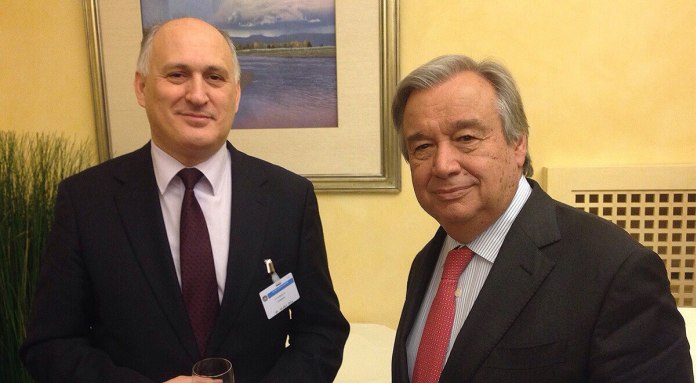 The Minister of Foreign Affairs of the Republic of Abkhazia Viacheslav Chirikba told in an interview for the Sputnik correspondent Inal Lazba about the results of another round of the Geneva discussions and actual directions of foreign policy.

Inal Lazba: Viacheslav Andreevich, on December 10 was held another round of talks in Geneva. As you know, in the course of discussions, representatives of Georgia and the United States gave a negative assessment of the agreement "On the alliance and strategic partnership" between Abkhazia and Russia. What was the position of other participants in the negotiations?

Viacheslav Chirikba: The delegation of the Republic of Abkhazia gave a detailed explanation of the nature of the new Abkhaz-Russian agreement, stressing that it strengthens the position of our state, creating additional conditions for improvement of the socio-economic status and provides new incentives for economic development. The military component of the agreement is a response to the new geopolitical challenges associated primarily with the activation of attempts by Georgia to join NATO, which is a direct threat to the security of both Russia and Abkhazia. It was stated that Abkhazia and Russia intend to continue to strengthen its strategic alliance. Respective clarifications were given by the Russian delegation as well.

Inal Lazba: At this stage, the main topic of the talks is the agreement on the nonuse of force. The signing did not take place and this time, are there any changes in this matter after the change of the key figures of the Georgian diplomacy?

Viacheslav Chirikba: Nevertheless, it is important to note that the Georgian side has to act in a non-winning for itself position of opponent to the agreement on non-use of force. It all the time has to somehow justify this its position. Other parties in the negotiation process - Abkhazia and South Ossetia, on the other hand, insist on signing a peace treaty as a first step towards resolving the conflict. So that the contrast in approach is obvious, and Georgia's position in this context - as a party which opposes the peace agreement - is very weak.

Inal Lazba: The EU and the United States continue the policy of non-recognition of official documents of Abkhazia and the Russian Federation passports issued in Abkhazia. Did you manage to bring the urgency of this problem to your colleagues?

Viacheslav Chirikba: For the first time the question of recognition of official documents issued by the authorities of Abkhazia and visa boycott by Western countries against Russian passports issued by Russian authorities in Abkhazia and South Ossetia, is discussed in detail at such a high international level in Geneva. As we know this conversation continues within relevant European institutions in Brussels. Our arguments that such non-recognition and non-issuance of visas are discriminatory and a violation of human rights by the European Union, are increasingly understood by the many participants in the discussions. After all, with regard to partially recognized Kosovo and almost unrecognized Northern Cyprus there are no such restrictions. No one protested against the travel of citizens of Moldova with Romanian passport and against the granting of, let's say, the citizens of Northern Ireland passports of the Republic of Ireland. With respect to the citizens of Abkhazia and South Ossetia, there is a clear discrimination. After all, the main humanitarian principle is that civilians should not suffer the consequences of unresolved and protracted conflicts. People should be able to live and develop before the conflicts resolve. These arguments, I repeat, are beginning to find understanding amongst our Western partners in the Geneva talks, besides the Georgian side, which justifies such restrictions in respect of our citizens. Georgia is in isolation in this issue as well.

Inal Lazba: Some experts speak about the crisis of the Geneva discussions. What do you think are the prospects of this negotiation platform?

Viacheslav Chirikba: If you expect that we should soon come to an agreement not to use force, then yes, the negotiations have long been in crisis, mainly because of the destructive position of the Georgian side. If to realize that there is a regular and systemic dialogue in Geneva of the Republic of Abkhazia with important world actors - such mega-organizations like the UN, the OSCE, the European Union, with high-level delegation of the United States, with a number of European and American politicians and experts - then Geneva acquires a unique value to advance the interests of Abkhazia in a rather unfavorable political environment, which is still firmly on the side of Georgia, but is starting to gradually open up for our arguments. We have nothing similar to this level. In addition, invaluable is the communication with colleagues from the Russian delegation and South Ossetia. So, I would like to say to skeptics of the Geneva discussions - offer something better. Never before Abkhazia had such a chance to speak directly with the world. Now we have this chance, and it should be used.

Inal Lazba: On the sidelines of the Geneva discussions you have had a meeting with the UN High Commissioner for Refugees. What were the issues you discussed?

Viacheslav Chirikba: Meeting with the High Commissioner was quite warm, he recalled his visit to Abkhazia and talked about his impressions about our country. I noted the great role played by the UNHCR to address many of the humanitarian problems associated with the war and the blockade, as well as the movement of people as a result of the war. In general, we had a good dialogue.

Inal Lazba: Immediately after the talks in Geneva, you spoke at a press conference in Cagliari called "Sardinia, friendly land for Abkhazia". It is also known that during this time it became possible with the mediation of the Abkhaz Foreign Ministry to establish contacts with municipalities in other regions of Italy. What are the prospects for cooperation at this level?

Viacheslav Chirikba: Still, regular communication of official representatives of Abkhazia with the heads of municipalities and members of the government of the autonomous regions of Italy, including Sardinia and Veneto, with Italian politicians, sometimes high-ranking diplomats, journalists, experts, scientists, public figures - all of this, I assure you, cannot be in vain and will be fruitful. We just need smart approaches, as well as patience and perseverance. Abkhazia is learned and discovered, and this is very important. In addition, there is great interest on the part of Italian business in Abkhazia. In January, we expect an impressive delegation of businessmen and perhaps investors from Italy - and this is also the result of our contacts. And from political point of view - our aim is to cause erosion in yet unified approach of Europeans to Abkhazia, to stimulate debate about our country, destroy the solidity of rejection of independent Abkhazia by Europe. We are already seeing different approaches, such as Switzerland, the UK. But all this cannot be achieved without direct dialogue.

Inal Lazba: On December 15 one of the organizers of the press conference with your participation in the Rome, the well-known journalist and social activist Giulietto Chiesa was detained by the police in Estonia. In your opinion, could this be related to his participation in the organization of the event and his position regarding Abkhazia?

Viacheslav Chirikba: In general, yes. Giulietto Chiesa is a prominent Italian journalist, public figure and intellectual. He is well known for his criticism of Western policy towards Russia, as well as the US policy, with their desire for world hegemony. Chiesa is a friend of Abkhazia, and his invitation to present in Rome at such a relevant conference in the Italian Parliament is due to his desire to make the position of Abkhazia clearer for Italian political society. All this together was not liked by the hawks in the public establishment of Estonia, and they committed not a very European act - detained and then deported the famous public figure for his beliefs, for what they received a storm of criticism in the Italian press and official demarches by the Italian Ministry of Foreign Affairs and Heads of EU foreign policy.

Inal Lazba: Abkhazia has always stated its commitment to a wide international recognition. Will the aggravation of relations of our main ally - the Russian Federation with the West affect the foreign policy strategy of Abkhazia?

Viacheslav Chirikba: No, it won't affect. We will continue the same course, expanding the number of friends, contacts around the world, at the same time actively opposing Georgian machinations against independent Abkhazia. To achieve recognition, we also look forward to the assistance of the Russian Federation, as described in the text of the new Abkhaz-Russian agreement.

If we manage to get on our feet, to create a prosperous economy - and for this we have all the prerequisites - and then there won't be left any arguments against our independence from anyone, I want to stress this, either domestically or abroad. Undoubtedly, the current deterioration of international relations, the sanctions war against Russia, the growth of anti-Russian sentiment in certain circles in the West have a negative impact on our efforts to achieve recognition. And yet we can achieve it, based on the total success both on economic and diplomatic fronts.