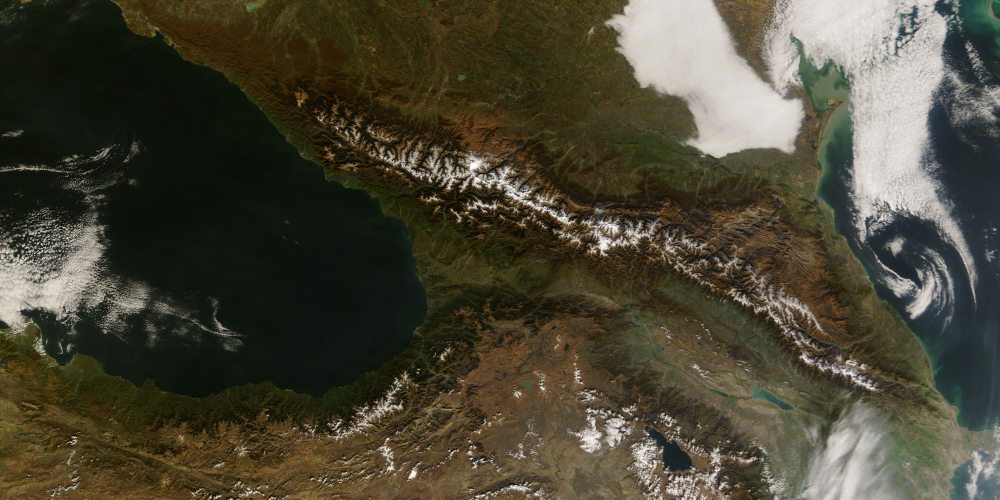 Caucasus Times continues its special project on the unrecognized republics and the broad geopolitics of the Caucasus region. Within the framework of this project experts, journalists and politicians will answer the question of how the fate of the new unrecognized republics of Abkhazia and South Ossetia is unfolding. And also, in what way the recognition of independence of these republics by Russia and a string of other states will change the attitudes of the international community towards them. Sergei Markedonov, a visiting fellow at the Center for Strategic and International Studies, Washington, USA, will talk to Caucasus Times’s guests.

You can find the earlier materials in the section Point of View http://caucasustimes.com/specrubric.asp?s=13

Stephen Shenfield is an independent researcher and translator. He was born in the UK and currently lives in the United States. He is the author of the book "Russian Fascism: Traditions, Trends and Movements" (published in 2001 in New York), as well as numerous articles and studies involving the problems of the Caucasus region. He has his own website - http://www.stephenshenfield.net

The interview with Stephen Shenfield and the notes were prepared specially for Caucasus Times by Sergey Markedonov, Ph.D., a visiting fellow at the Center for Strategic and International Studies (Washington, DC)

Sergey Markedonov: Discussing the dynamics of ethno-political conflicts the both sides (as well as interested actors) usually appeal to the historical past. Who shot the first? What things/processes triggered the confrontation? How can you evaluate this factor in the Georgian-Abkhaz conflict? What events in your view could be correctly considered as a starting point or turning points in it? Since what time can we begin the history of this conflict?

Stephen Shenfield: I have traced the origins and evolution of this conflict in an essay that can be found on AbkhazWorld.com[1] and on my website .

Before the Russian conquest of the region at the beginning of the 19th century, what is now Georgia consisted of a collection of local principalities, one of which was Abkhazia.[2] There were frequent wars among these little states, but as none of them represented “Georgia” there was no Georgian-Abkhaz conflict.

The Georgian-Abkhaz conflict has its roots in the aftermath of the Russian-Turkish war of 1877-78. By this time a Georgian national consciousness was emerging, at least among educated people, so we can speak of “Georgia” and “Georgians.”

When war broke out the Abkhaz rose up against Russian rule. The uprising was suppressed[3] and many Abkhaz were deported to Turkey, leaving almost half of Abkhazia uninhabited. The emptied lands were resettled largely by land-hungry peasants from the lowland districts of western Georgia. Moreover, Georgian intellectuals interpreted this resettlement as a Georgian colonization of Abkhazia.

In the late 19th century it was still widely accepted that “civilized” nations had the right to colonize lands inhabited by peoples they regarded as “primitive.”[4] But colonization still aroused the resentment of the colonized. And of course being looked down on as primitive also aroused resentment. This was the start of a long process by which the Abkhaz gradually stopped viewing the Russians as their main oppressors and reassigned that role to the Georgians.

A new wave of Georgian colonization, accompanied by suppression of the Abkhaz language, occurred under Stalin.[5] As a result the Abkhaz were reduced to a not very large minority in their own homeland, generating fears of cultural or even perhaps physical extinction.

The uncertainty and insecurity of the post-Soviet transition made war a possibility in Abkhazia as in other hotspots throughout the disintegrating empire. But the final episode that made war almost inevitable took place in July 1989, when Georgian nationalist militias entered Abkhazia and started beating and killing Abkhaz.[6] The pogrom was only halted by the intervention of Soviet troops.

Other turning points might also be identified, but I think these were the crucial ones – the uprising and deportation in 1877-78, Stalin’s anti-Abkhaz campaign, and the pogrom of July 1989.

Markedonov: Some time ago you published a work concerning the Stalin-Beria terror in Abkhazia.[7] The Abkhazian intellectuals consider this period in terms of “Georgianization” and national trauma. The Georgians tend to see it as a demonstration of the Soviet rule with less specific Georgian features or at least sharing responsibility between local CPSU structures and Kremlin? In what extent those events could be seen as the Soviet or Georgian national offensive? In what extent are they helpful to understand prerequisites of the conflict better?

Shenfield: The Soviet system was highly centralized and any significant policy initiative had to be approved by the Kremlin even if the initial proposal originated in local structures. So of course the Kremlin shared responsibility. But who were the key personalities involved? In Tbilisi – Beria.[8] In Moscow – Stalin. Both Georgians! (True, Beria was actually a Megrel, but the Megrels were already seen as part of the Georgian nation.) So from the point of view of ordinary people, who always tend to view politics in personal terms, a Georgian was responsible at both levels.

In most places Stalin’s nationality policy was one of Russification. But in Abkhazia, by way of exception, the language being imposed was not Russian but Georgian. Abkhaz children were forced to use Georgian not Russian. And the newcomers being settled on “Abkhaz” land were Georgians and not Russians. So it was quite natural for the Abkhaz to interpret what was happening as a Georgian national offensive, even though it took place within the overall framework of the Soviet system so that system was also to blame.

There ware in fact other examples in the USSR of small ethnic groups being forcibly assimilated not into Russian but into somewhat larger local groups. This was the fate of various small ethnic groups in Dagestan. The initiative did not necessarily come from the group into which they were assimilated. It was social engineering on a much larger scale.

Markedonov: In your publications you pay attention to the History and current situation in the Western Caucasus observing Circassian issues? How can you estimate the Abkhaz-Circassian relationship in the past and nowadays? What factors did contribute in their evolution?

Shenfield: The Abkhaz and the Circassians regard each other as close ethnic kin. This was even clearer before the deportations of the Circassians in the 1860s, when there was a third group – the Ubykh – who formed a bridge between the Circassians and the Abkhaz, in terms of both location and language. The Ubykh were deported to the last individual. [9]

Many Abkhaz took part in the prolonged armed resistance of the Circassians to tsarist rule, and Circassian volunteers fought on the Abkhaz side in 1992.

In recent years there has been some tension between the Abkhaz and many Circassians on the issue of relations with the Kremlin. The Abkhaz have their own reservations about their Russian allies, but they depend on Russia and cannot jeopardize the support and assistance they get from Russia. However, despite the harsh policies of the Putin regime[10] there are also Circassians who still try to reconcile their national aspirations with loyalty to Moscow. The tension between Abkhaz and Circassians associated with this factor is mitigated by the strong feeling of ethnic kinship and by some understanding of the other side’s situation. A common hope among Abkhaz is that they might be able to act as mediators between the Circassians and the Kremlin, at least informally.

Markedonov: In 2011, May Georgia recognized alleged genocide of Circassians? How has this step influenced the situation in the South Caucasus, Georgia positions in the North Caucasus region of Russia? It seems after Ivanishvili[11] has come to power the Tbilisi interest to this topic has decreased greatly? Has it been decreased or completely declined?

Shenfield: I haven’t been following Ivanishvili’s policies in this area, but the Georgian side has good reason to retreat from support for Circassian aspirations. It was not only an unnecessary complication of their relations with Russia, to which they have to give priority. It has also led Circassians opposed to close relations with Georgia to raise historical issues that are discomforting for Georgians – in particular, the role played by Georgians in the 19th century on the Russian side.[12]

Markedonov: The next February Russia will host Winter Olympics. What role will it play in the Russia-Abkhaz relationship as well general dynamics around the Western Caucasus?

Shenfield: Sorry, I haven’t been able to form definite views on this.

[1] Stephen Shenfield’s work "The roots and evolution of the Georgian-Abkhaz conflict" (in English) published April 26, 2012. It is accessible on-line at http://www.stephenshenfield.net/places/caucasus/11-origins-and-evolution-of-the-georgian-abkhaz-conflict

AbkhazWorld.com is a specialized English-language website dedicated to the history, culture, and political development of Abkhazia. It contains a specialized digital library. See: http://www.abkhazworld.com

[2] Prior to1810, the Principality of Abkhazia was a vassal of the Ottoman Empire. On February 17, 1810 the Russian Emperor Alexander I signed a document that recognized Giorgi Shervashidze (also known as Safarbei or Seferbey Chachba) "hereditary prince of the Abkhaz Kingdom under the supreme patronage, power and protection of the Russian Empire." In practice, however, the process of incorporating Abkhazia into the Russian Empire lasted until the end of the 1870s.

[3] For a more detailed study of the Abkhaz factor in the Russian-Turkish war of 1877-1878, see Georgii Dzidzaria’s fundamental "Makhadjirstvo and Problems of 19th Century Abkhaz History” (Sukhumi, 1975).

[4] It is significant that in September 1877, the famous Georgian public figure and teacher Jacob Gogebashvili (1840-1912) argued in an article in the "Journal of Tiflis" as follows: "The resettlement is, without a doubt, not temporary, but irrevocable. Abkhazia will never see her sons again.'"

[5] Joseph Vissarionovich Stalin (Dzhugashvili) (1878 or 1879 - 1953) was a Russian revolutionary, then a Soviet politician and statesman who was Soviet leader for almost three decades.

[6] The reason for the events of July 1989 was the decision to make the Georgian sector of the Abkhaz State University a branch of Tbilisi State University. Fourteen people were killed during those two weeks in July 1989.

[7] Stephen Shenfield’s work "The Stalin-Beria Terror in Abkhazia" was posted on his website in English on April 6, 2012. It is available on-line at: http://www.stephenshenfield.net/places/caucasus/14-the-stalin-beria-terror-in-abkhazia

[8] Lavrentii Pavlovich Beria (1899-1953) was a Soviet party and state functionary. From November 1931 - August 1938 he served as First Secretary of the Communist Party (Bolsheviks) of the Georgian Soviet Socialist Republic, of which the Abkhaz ASSR was a part. From October 1932 he simultaneously occupied the post of First Secretary of the Transcaucasian Regional Committee (until its dissolution in April 1937).

[9] The Ubykhs were a people whose language, culture and way of life were related to those of the Abkhaz and Circassians. Prior to the 1860s they lived on the Black Sea coast in the vicinity of present-day Greater Sochi. After their resettlement to the Ottoman Empire, only about 40 Ubykhs remained in the Caucasus. Well-known Abkhaz writer Bagrat Shinkuba (1917-2004)’s book “The Last of the Departed” traces the fate of the Ubykhs.

[10] Vladimir Vladimirovich Putin (born in 1952) is the current president of Russia.

[11] G. Bidzina Ivanishvili (born in 1956) is the current chairman of the government of Georgia.

[12] The Tiflis leader of nobility Dmitry Kipiani addressed the following greeting to the governor of the Caucasus, Grand Duke Mikhail Nikolayevich Romanov, on 9 June, 1864: "Your Imperial Highness! You have completed the conquest of the Caucasus and have thus incorporated in history an event of enormous importance that is inseparable from your name. Persons selected by the Georgian nobility bring your Imperial Highness congratulations in the name of all social classes. " For details see S. Esadze “The Conquest of the Western Caucasus and the end of the Caucasian War. Historical Sketch.” Tiflis. 1914.

This interview was published by Caucasus Times and is translated from Russian.