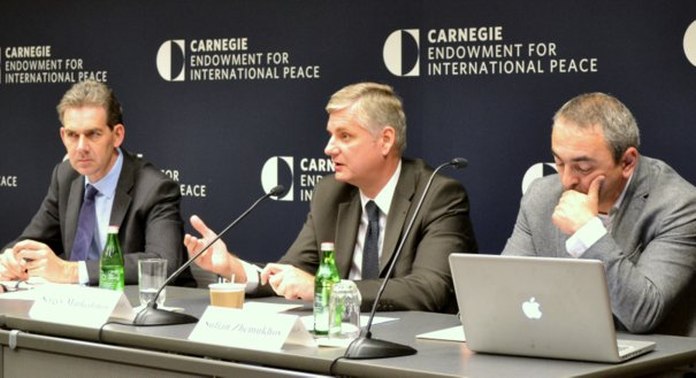 Caucasus Times: This November leaders of Russia and Abkhazia signed a Treaty. The draft of it provoked serious discussion among Abkhaz politicians and NGO leaders. What controversies were the most important in your views? What ideas of the Abkhaz side were finally realized in the Treaty text? De this Treaty open a new chapter in the Russia-Abkhaz relationship?

Thomas de Waal: For the Abkhaz political elite, the first "Moscow" draft of the treaty was controversial chiefly, it was a treaty about "integration," something they strongly reject as contrary to everything they have fought for. (I believe large parts of the public, especially Armenians and Russians, are more positive towards the idea but do not say so publicly).

In the Russian version, "integration" envisaged the merging of Abkhaz and Russian military structures, "joint control" of anything and anyone crossing Abkhazia's borders and an "agreed foreign policy." Article 14 called for encouraging and simplifying the procedures whereby citizens of one Party to the Treaty acquire the citizenship of the other Party to the Treaty, something that would have allowed Russians to acquire Abkhaz citizenship and thus acquire property in Abkhazia.

It is striking--and too little noticed by commentators--how much the Abkhaz side changed or completely removed in their draft of the treaty. "Integration" was changed to "strategic partnership." Russians were no longer given the right to acquire Abkhaz citizenship, foreign policy was to be "coordinated" rather than "agreed." The Abkhaz kept its own military structures.

In that sense, I do not think the treaty cannot be regarded as a watershed in Abkhaz-Russian relations. However, it remains to be seen whether the Abkhaz will be able to defend de facto what they have insisted on de jure.

Caucasus Times: The process of the Russia-Abkhazia Treaty preparation has attracted serious attention in Georgia? What influence will it have on the Russia-Georgia normalization?

Thomas de Waal: In his recent speech to the State Duma, Foreign Minister Sergei Lavrov referred to both the new treaty with Abkhazia and to continuing "normalization of relations" with Georgia. However, the new treaty has been greeted with huge fear and suspicion in Georgia. The United National Movement opposition is making life difficult for the government by complaining loudly that they are not doing enough to defend Georgia's territorial integrity--although not specifying exactly what they should do. There is a lot of unease in Georgia about Russia's intentions, because of the Ukraine crisis. I suspect that the immediate effect of the Abkhazia treaty will be to kill of any prospects of reopening the railway through Abkhazia. New trade relations and air communications will be maintained but the political dialogue is becoming more and more difficult.

Caucasus Times: Recently Georgia survived series of resignations? Irakli Alasania left the position of Defense Minister? Does it mean crisis of the Georgian Dream? Do you see reconfiguration of the Georgian political space after it? How do you estimate political potential of ex-Minister and his supporters?

Thomas de Waal: The Georgian Dream coalition was always united by what it was for, rather than what it was against. So it was not a big surprise that Alasania left the coalition, given his long-standing disagreements with its founder, Bidzina Ivanishvili. But it looks as though no one has an interest in early elections and everyone prefers to start preparing for the election of 2016. Alasania's best hope will be if he can participate in a political coalition that also includes the Republican Party and President Giorgi Margvelashvili.

Caucasus Times: South Ossetia is rather overshadowed by the Abkhaz dynamics. However do you see any similar developments there in terms of new Treaties with Russia? How do you estimate the Crimean case repetition here?

Thomas de Waal: South Ossetian politics are even more opaque than those of Abkhazia. The South Ossetian elite is also much weaker than that in Abkhazia. I believe ideally they would like several mutually incompatible things: a closer political relationship with North Ossetia and in the ideal scenario complete union; firm economic and security support from Moscow; and a resumption of a trading relationship with Georgia. Moscow meanwhile seems to be disappointed that it has spent so much money in South Ossetia without seeing much visible change. So it is hard to see how the two sides can agree on the text of a new substantial treaty soon.

Caucasus Times: Last but most important question. Currently many observers began paying more attention to the North Caucasus especially after terrorist attacks in Grozny this October and December? What’s your prognosis on the regional developments? Do you consider those events as end of the “Sochi effect”? What reaction should we expect from the USA and their European allies on the North Caucasus instabilities?

Thomas de Waal: Obviously, under the leadership of Ramzan Kadyrov, the underlying causes of conflict in Chechnya have not been resolved, they have only been suppressed. Kadyrov has been given a free hand to use all means possible to fight extremists and in return relies on Moscow for unlimited financial support.

At the same time I don't believe the Caucasus Emirate is a real or strong organization--it is probably little more than a website and a few hundred young men with weapons. I also don't believe it has much support in Chechnya. Its base is in Dagestan. But obviously they still have the capacity to stage occasional attacks which demonstrate to Kadyrov and the world that all is not quiet iin Chechnya. That is what they did in Grozny on December 4, trying simultaneously to embarrass President Putin as he gave his national speech and to mark the 20th anniversary of the outbreak of war in Chechnya. Is this the start of a big new campaign? I doubt it, but no one really knows the answer to that question.