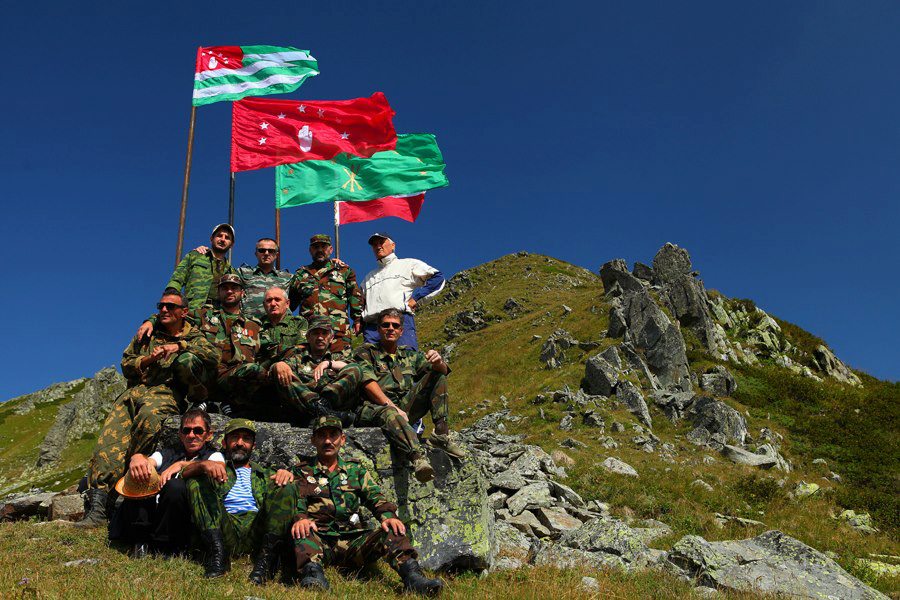 “Attempts to sow discord between the Abkhazian and Circassians are doomed to failure,” is the considered view of a group of veterans of the Abkhazian people’s Patriotic War (1992-93), among whom are volunteers from the North Caucasus.

"Attempts to sow discord between our consanguineous peoples, made irresponsible and partisan populists, cannot have a serious impact on public opinion,” declare the veterans. “However, these attempts demonstrate that the contacts between representatives of our peoples at different levels need to expand and intensify. And we are ready to take the initiative in this matter."

The twentieth anniversary of the Victory in the Great Patriotic War of the Abkhazian people in 1992-93 is approaching. Since that glorious day, the years have been challenging and full of important events in the history of our peoples, but even now the total victory over much stronger and more numerous enemies remains for us the highlight of our lives.

The struggle for the freedom of Abkhazia fully manifested the unity and brotherhood of our peoples and became our common goal, filled with deep meaning and dreams of a happy future for our peoples.

After the tragedy experienced by our people in the 19th century and the many years of isolation from each other, it seemed that the spirit of brotherhood and the call of blood had been extinguished forever, that the awareness of the commonality of the roots of the Circassians and Abkhazians had long sunk into oblivion, and that our glorious past would never again be full of life and actuality .

However, fortunately, it all came together in a different way. In the struggle for the freedom of Abkhazia we rediscovered each other and were able to see that the years had not erased the commonality of our national character and the unity of our aspirations.

We realised it was too early to relegate to the archives our multi-millennial glorious past, that it is alive in the present and will live in the future generations of our peoples. Behind each name of those of our brothers who laid down their heads in this fight there stand glorious kin with closely intertwined fate. And it often happens that the ancestors of those with Abkhazian surnames are Circassians, and vice-versa.

In the life of our peoples there have never been border-boundaries and deep dividing lines; we have a completely different history. Thus, attempts to impose on our nations historical and territorial disputes are flawed and inconsistent; behind them can be traced the clear political sub-text to sow enmity and erase our historical memory.

The Abkhazians and Circassians have never had this kind of mutual pretensions, and there is no reason for them today. It is of absolutely no importance in which village, Abkhazian or Adyghean, the Caucasian War ended. Hardly a thought was given to this by our ancestors who fought for their freedom and the right to live in their native land, and together shared the bitter fate of exiles. It is no accident that it was sometimes difficult for outside observers, their memories of the tragic events abandoned, to determine who are the Abkhazians and who the Circassians. Does not all this speak for itself? Do we today have the right to our great past into oblivion and pack up the bones of our ancestors buried on common ground?

We Abkhazians and Circassians, veterans of the war for the freedom of Abkhazia, know as no-one else the value of brotherhood. In our memory remain alive the bright images of the youths who did not return from the battlefields. It may be that not everything turned out the way we dreamed that day when the flag of victory was hoisted over liberated Sukhum.

But most importantly, Abkhazia became a free and recognised country. We have a lot of problems, but before our eyes stand the examples of Vladislav Ardzinba, Yuri Kalmykov, Sultan Sosnaliev and other famous heroes, who devoted their entire lives to serving the brotherhood and unity of our peoples.

If we follow the path blazed by them, we shall be able to overcome all difficulties and to ensure the welfare and prosperity of our peoples.

We believe that attempts to sow discord between our consanguineous peoples by irresponsible and partisan populists cannot make any serious impact on public opinion.

However, these attempts demonstrate that the contacts between our peoples at different levels need to expand and intensify. And we are ready to take the initiative in this matter.

Anzor Goov - Volunteer of the Kabardino-Balkarian Republic, Officer of the Order of Leon.

Aslan Abaev - Volunteer of the Kabardino-Balkarian Republic, the Hero of Abkhazia.

Batal Dzhapua - Veteran of the war.

Timur Nadaraia - Officer of the Order of Leon.

Anzor Psaun - Volunteer of the Kabardino-Balkarian Republic, Officer of the Order of Leon.

Bogus Aden - Volunteer of Adyghea, Commander of the Order of Leon.

Zaur Borov - Volunteer of the Kabardino-Balkarian Republic, Commander of the Order of Leon

Aslan Bitokov - Volunteer of the Kabardino-Balkarian Republic, Officer of the Order of Leon.

Aslan Mirzej - Volunteer of the Kabardino-Balkarian Republic, Hero of Abkhazia.