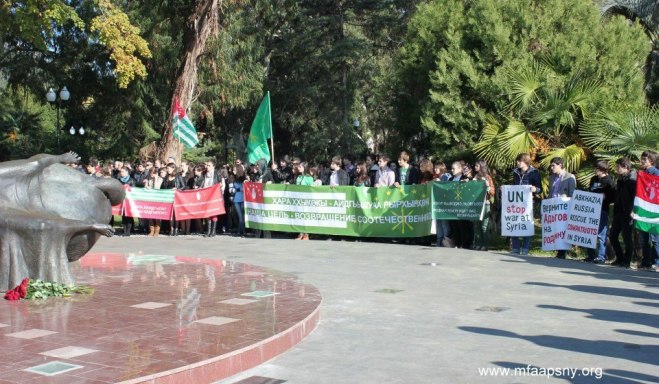 SUKHUM -- An act of solidarity with Syria’s Abkhaz-Adyghe, Circassian diaspora took place in Sukhum. It was organized by a youth movement.

Young people with flags and placards assembled at the Abkhazian Drama Theatre then made their way to the Sukhum waterfront monument to the Muhajirs.

"The return of the descendants of Muhajirs  is our common goal, our national idea. This problem unites us with our Circassian brothers. We are united on this issue because it is not only the restoration of historical justice, this is a chance for the revival of our peoples," said Timur Nadaraya, opening the meeting.

In Nadaraya’s words, the events in Syria laid bare with a particular acuteness the problems of repatriation. "Our goal is to help our compatriots to return to their homeland," he stressed. Doctor of historical sciences Teimuraz Achugba, Hero of Abkhazia Apollo Shinkuba, parliamentarian Akhra Bzhania, writer Vladimir Zantaria, chairman of the Council of Elders of Abkhazia Konstantin Ozgan, advisor to the president of the MAAAN Beslan Kobakhia, Leila Beygulova, Christina Zhiba, Tengiz Agrba, and Alkhas Aslandziya also addressed the meeting.

The participants adopted an address to their compatriots which reads:

For over a year our attention, as well as the attention of the global community, has been fixed on the situation in Syria, where a civil war is underway. Explosions, shootings, killings of civilians, systematic violations of human rights have unfortunately become part of daily life in that country. Syria is home to more than 100,000 citizens of the Russian Federation who need help, and the same number [of people], whom Russia and Abkhazia recognize as their compatriots.

The Circassian diaspora in Syria is the second largest in the world. It comprises  Circassians, Abkhazians and representatives of other North Caucasian peoples  who find themselves in a most difficult situation because their desire to remain neutral results in a threat to their survival. As you know, it was not of their own volition that our compatriots found themselves on Syrian territory, but as a result of the tragic events of the XIXth century in their historic homeland. Hopes that the conflict will be resolved peacefully melt with each day that passes. Today, our brothers are killed every day. Children, women, old people live for months on end in basements, hiding from the attacks of the opposing sides, without adequate supplies of  water, food, and medicines.

The whole world knows about the tragedy that took place in two villages on the Golan Heights populated by Circassians and refugees, in which dozens of civilians were killed. In this situation, we are convinced that we cannot simply remain witnesses, or even worse, indifferent and apathetic, while our brothers and sister are being killed. We know that with the assistance of the Russian Federation and the efforts of our government, Abkhazia has accepted and settled more than one hundred refugees from Syria, but this is just a drop in the ocean, as thousands of people are still in need of help and evacuation. In the current situation we are not talking about a planned repatriation. It is our conviction that emergency measures need to be taken to avert a humanitarian catastrophe; we are talking about saving people’s lives.

We have assembled here and call on the leadership of our state with the demand that in accordance with the Constitution and laws of the country they take immediate action and demonstrate the political will to protect the lives of our compatriots.  In that connection, we propose:

1) That the president of the country should convene as soon as possible an emergency cabinet meeting, to which  members of parliament will be invited, to decide on providing humanitarian aid and creating conditions for the evacuation to the territory of Abkhazia of representatives of Syria’s Abkhaz-Adyghe diaspora. The president should also appoint a special representative of the President of the Republic of Abkhazia in Syria for diaspora issues.

2) We propose to the Cabinet of Ministers to prepare within one month the requisite number of places at state-owned tourism facilities to house refugees from Syria.

4) We propose that the Abkhaz State TV and Radio Corporation and "Abaza TV," together with public organizations, prepare and conduct within two weeks a TV marathon to raise funds to provide humanitarian aid to Syria’s Circassian diaspora and Russian citizens living in Syria. The funds raised are to be transferred to a special account of the newly created Public Committee.

6) We propose that the leadership of our country should appeal to the governments of all states that border on Syria to help all of our compatriots who want to return to their historic homeland.

7) We appeal to the participants of the World Congress of the Abkhaz-Abaza people that opens on November 23 in Sukhum to discuss the predicament of the Circassian diaspora in Syria, as well as to adopt an appeal to the leadership of Abkhazia and the Russian Federation, to international organizations - the UN, the OSCE High Commissioner on refugees, to all Abkhaz-Circassian diaspora organizations, to intensify efforts to rescue our countrymen in Syria and evacuate them to any safe location.

We look forward to a positive response and to cooperation with all healthy forces in society and government.