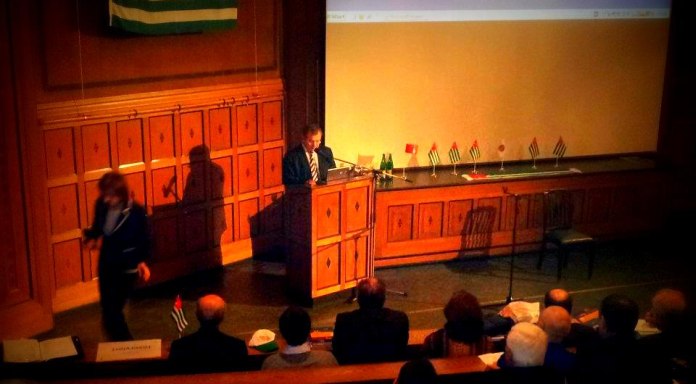 ‘Abkhazia’s Day’ was held on 22 April, 2012, at Hamburg’s Museum of Ethnography under the rubric of the annual conference dedicated to the countries and peoples of the Caucasus. As the representative of the Ministry of Foreign Affairs of Abkhazia in Germany. Khibla Amichba, reported to ApsnyPress, papers on the history and ethnography of Abkhazia, the Abkhaz language, economics, and the art of our country were presented scientific.

Despite all the efforts of the Georgian side to put pressure on the organisers (most of all, on Museum Director, Professor Wulf Köpke) and to prevent the organisation of the conference, it was, according to participants, a great success. In his speech, Prof. Köpke said: "We, the Museum of Ethnography, have today focused our attention on an ancient people and their homeland. And no embassy can dictate to us how are we going to talk about it."

At the beginning of the conference a film about Abkhazia, sent by the governing body of the of Abkhazia’s State TV and Radio Company, was shown.

The papers delivered by Taras Shamba and Yuri Anchabadze dealt with: the stages of the historical path of the Abkhazians; the ‘Great Exile’ (makhadzhirstvo) and its consequences for the peoples of the North-West Caucasus; and Abkhazia in the context of the ethno-cultural world of the Caucasus.

Dennis Chachkhalia and journalist A.Yu.Neproshin spoke about German scholar-travellers and their explorations on Abkhazia, as well as about the aristocratic dynasties of Abkhazia.

Candidate of Philological Sciences, Khibla Amichba, devoted her speech to language as a source of information about history and ethnography, the actual problems of the Abkhaz and Abaza languages at home and abroad.

Professor Shenol Yaprak, Beslan Butba and M. Urchukov spoke on the economy of Abkhazia, the stages of its development, investment-projects and the economic resources of the country.

Candidate in Sociological Sciences Beslan Kobakhia addressed the question of the protection of the rights of peoples.

Violetta Rudat-Avidzba spoke about the traditional culture of the Abkhazians.

The conference-guests represented almost all German cities, as well as Holland, Switzerland, Russia, Turkey and Bulgaria.

The conference was attended by the chairmen of the two European Circassian Associations, Mr. Omer Tamzok and Mr. Levent Sürer. They invited the guests to participate in the Day of the Caucasus [Circassian] in the European Parliament in Brussels.

At the invitation of the organisers, the conference was attended by the Consul-Counsellor of the Russian Federation in Hamburg, Mr. Stankiewicz, and and by the Plenipotentiary of the Republic of Abkhazia in Bulgaria, Omer Marshan.

Another guest of the conference was a member of the von Oldenburg line, a descendant of Prince Alexander Petrovich Oldenburgskij, well-known in Abkhazia, Duke Huno von Oldenburg. He expressed his gratitude for the invitation and his hope for the continuation of the historical friendship with Abkhazia and its people.

The guests of the conference, coming from Russia and Abkhazia, presented to Professor. Köpke, to the leaders of the Circassian Associations, to the young representatives, and to the guests gifts and souvenirs from Abkhazia as mementos.

Both the speakers as well as the journalists attending from different countries noted the high information-content and the usefulness of holding such events in Europe, where Abkhazia is still very poorly known.

At the organised press-conference, the guests were asked questions by journalists from Germany and Turkey (one of the articles was published in the newspaper "Hürriyet” from 23 April 2012).

The Conference and its materials, which will be published in book-form and posted on the Internet, should contribute to the further establishment of diverse contacts between Abkhazia and European countries.