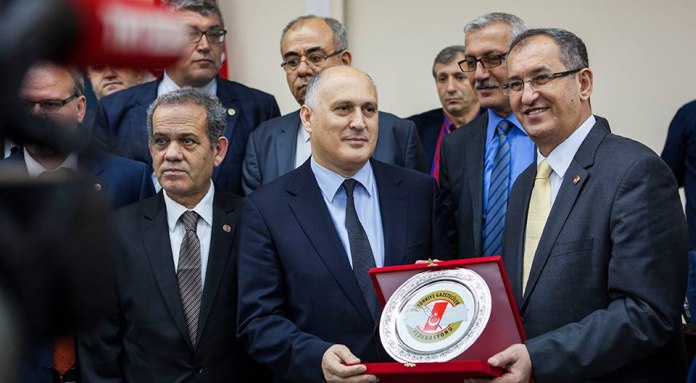 On May 9 was held a press conference of the Foreign Minister Viacheslav Chirikba for Turkish media, members of the Federation of Turkish journalists.

The press conference was attended by more than 80 representatives of the Turkish media, headed by the Chairman of the Federation of Journalists in Turkey Atilla Sertel, Chairman of the Federation of Abkhaz cultural centers in Turkey Cengiz Koc Ashuba, Chairman of the Union of Journalists of Abkhazia Vladimir Kapba, director of the SIA "Apsnypress" Manana Gurgulia, executive director of AGTRK Alkhas Cholokua, representatives of Abkhazian media. Below is the full text of the opening speech of the Minister of Foreign Affairs of the Republic of Abkhazia Viacheslav Chirikba:

I cordially welcome you in the Republic of Abkhazia within the 44th General Assembly of the Council of Federation of Journalists of Turkey and the first Congress of the Turkish - Abkhaz journalists.

In Abkhazia we appreciate the historical and cultural ties with the Republic of Turkey and welcome with satisfaction the intensification of contacts and communication of our friendly nations.

We indeed live in a unique time. We are building a new, free, independent Abkhazia. However, no country can develop without friends. We have already established a strong partnership and allied relations with the Russian Federation, we develop and maintain relationships with other countries with which we have diplomatic and simply friendly relations.

In general, the strengthening of existing contacts , as well as strong growth of new channels of communication with the outside world remain relevant and priority directions of the policy of the Abkhaz state. But the main objective of foreign policy activity of Abkhazia at this stage is the expansion of its international recognition, its membership in the UN and other major international organizations.

The Georgian leadership, which in 1992 committed the armed aggression against Abkhazia, killing thousands of civilians and causing irreparable damage to the economy of our country, still keeps trying every possible way to block foreign policy of Abkhazia and essentially trying to achieve the international isolation of our people, which seems unthinkable in the 21st century, the century of globalization and expansion of international contacts. Due to pressure of Georgia was stopped the passenger ferry communication between Abkhazia and Turkey which was functioning successfully, depriving citizens of our countries of the possibility of direct communication. In April last year, thanks to the efforts of Georgia, the Abkhaz children's dance ensemble was excluded from the program of the International Children's Festival, founded by Mustafa Kemal Ataturk in memory of holding the first Turkish Grand National Assembly in Ankara in 1920, although earlier the participation of the Abkhaz group was recorded on the official website of the festival. Georgian military boats do not stop to seize the Turkish commercial vessels delivering various goods from Turkey to Abkhazia.

Unfortunately, we have to note that the new leadership of Georgia does not disdain to use any available means to isolate the people of Abkhazia from the cultural and humanitarian communication with the outside world.

1. Recognition of the independence of the Republic of Abkhazia by the Turkish Republic.

2. Opening of diplomatic institutions of the Republic of Abkhazia in Ankara and of the Turkish Republic in Sukhum.

3. Mutual recognition of passports (travel documents), as well as other legal documents.

4 . Establishment of air and sea links between the Republic of Abkhazia and Turkey.

5 . Involvement of Turkish investments in the economy of Abkhazia.

The Ministry of Foreign Affairs is implementing the foreign policy of the Republic of Abkhazia in the region, guided by the tasks of establishment of strong channels of regional cooperation with the Republic of Abkhazia and the Republic of Turkey and with the countries of Middle East, strengthening existing relationships, including using close contacts with the Abkhaz Diaspora in these countries. I want to emphasize that by coordinating efforts with the leadership of Abkhaz cultural centers in Turkey over the last few years we have made significant progress in the establishment of good-neighborly relations with Turkey, its cities and regions.

I cannot but note with pleasure the importance of the law adopted by the Turkish Parliament that provides the opportunity to study, including the Abkhaz language, in places where our brothers are densely populated.

Dear friends, I am sure that your visit to Abkhazia will further strengthen the historically good neighborly relations between the Abkhaz and Turkish peoples, as well as allow the Turkish society to know better the peaceful Abkhazian people.

In the 17th century, the great Turkish traveler Evliya Celebi was one of the first who, in his famous "Book of Travels" described the Abkhazian people and even left us a precious testimony of the Abkhaz language of the time. It is symbolic that the mother and uncle of Celebi, the Grand Vizier Melik Ahmed Pasha, came from Abkhazia. There were many Abkhazians in the Ottoman court. A number of Turkish sultans had Abkhaz wives and mothers. And during the formation of the Turkish Republic many outstanding Abkhazians and Circassians were standing next to Mustafa Kemal. Thus, the Prime Minister of Turkey at Mustafa Kemal was an ethnic Abkhaz and faithful ally of Ataturk Rauf Orbay.

Now, in the 21st century, I hope, comes a new era of relations between the people of Abkhazia and people of Turkey. We - close neighbors separated only by the Black Sea. We need to know each other better, we have great prospects in the field of business, especially in the construction, agriculture and tourism, as well as exchange in the field of culture, education and sports. We are linked by the presence of numerous Diaspora of our brothers in the Turkish Republic - Turkish citizens - Abkhazians, Circassians, Ubykhs. I am convinced that the Abkhaz- Turkish relations have great good future. Thank you for your attention. Thank you!"