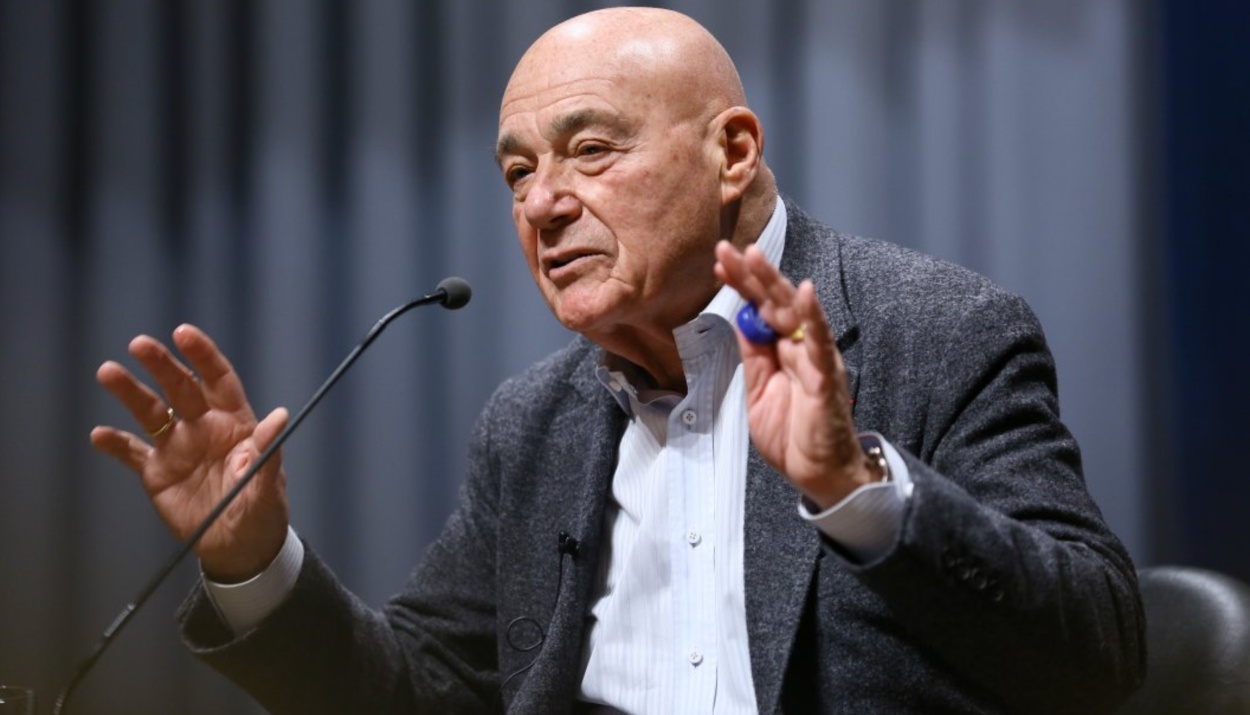 Ekho Kavkaza --  Abkhazian society could not help reacting to the scandalous incident in Georgia involving the 87-year-old Russian journalist Vladimir Pozner, if only because Abkhazia is directly related to this scandal. Pozner came to Tbilisi as a tourist with friends to celebrate his birthday, which, according to him, he was doing for the third time. But a number of Georgian politicians protested in social networks against his arrival, as "with his statements he questioned the territorial integrity of Georgia". In particular, Pozner was reminded of his words that "Abkhazia will never be a part of Georgia."

The protesters threw eggs at the hotel-building where the Russians were staying. The TV-presenter was going to fly out of Tbilisi on 3 April, but because of the protests, he left the country early in the morning on 1 April, his birthday. On the way to the airport, the bus with the Russians was again pelted with eggs.

President of Abkhazia Aslan Bzhania congratulated journalist Vladimir Pozner on his birthday and invited him to visit the republic:

“All residents of Abkhazia viewed with bewilderment the situation that developed around you during your visit to Tbilisi. Only indignation can be caused by the actions of so-called Caucasians who have violated all the age-old traditions of the peoples of the Caucasus. Dear Vladimir Vladimirovich, they will always be waiting for you in Abkhazia. I invite you to visit the republic at any convenient time for you,” were the words the president addressed to the journalist.

He was also invited to visit Abkhazia by the leader of the Abkhazian opposition, former Deputy Prime Minister, Adgur Ardzinba, and Minister of Tourism of the Republic, Teimuraz Khishba.

Many in Abkhazian society also recalled how, literally two days ago, Georgian Internet commentators attacked Abkhazia, where, in their opinion, freedom of speech is being violated, since the anger of thousands of people was caused by a video posted on a social network by 19-year-old Alena Tania, who said “Abkhazia is Georgia”. One social-media user wrote:

“Georgian Internet commentators called even the Abkhazian lawyer, Inga Gabilaia, a Nazi, who, over the air-waves of ‘Echo Kavkaza’, stressing that Alena’s act would not have legal consequences under Abkhazian legislation, nevertheless chided her for this act. That is, a lawyer of Abkhazian nationality is expected to support the notion that Abkhazia is Georgia, otherwise she is not a lawyer but a Nazi!.. Is Georgian society really that naive? Judging by the comments, many there decided that this strange girl is indeed the spokesman for the thoughts and aspirations of Abkhazian youth, and they were incredibly happy about that!"

By the way, discussion of the story about Alena Tania continues in Abkhazia. There is no complete unanimity here. Many commentators considered as an overreaction those who were ready to tear to pieces a girl who was photographed in the uniform of a police officer and posted it on the network, and who then shouted "cool phrase" that "Abkhazia is Georgia."

Abkhazian expert Liana Kvarchelia attracted attention with her text in one media-outlet, which begins like this: "It is amazing: a young girl blurts out something stupid, and some immediately begin to see the intrigues of the West and NGOs everywhere."

‘Echo Kavkaza’ spoke with Liana Kvarchelia today about both overlapping topics. Here's what she said:

“Social networks have broken down a lot of barriers, especially among young people. And very often, it seems to me, they write and speak there, completely without thinking and not realising how it is perceived by others. Here, of course, one must take into account the conditions in which this girl was brought up, what kind of situation there is in the family. I know that this is a family that both ‘Kiaraz’ and the Children's Fund helped a lot. Her mother died, and her father, as far as I know, does not live with the family. These children were raised by their grandparents, who simply tried to feed them somehow so that they would survive. The situation is quite difficult there."

Alena is better known to the director of the Children's Fund of Abkhazia, Asida Lomia, who wrote in comments on the afore-mentioned text of Liana Kvarchelia in the mass-media:

“Yesterday I paid her a visit; this family is one than which I do not know a poorer one. The children are not developed, not having gone to school, and so on. There was no mother there; the father lives with another family. Community-organisations helped with food and clothing. The family is registered with the social service. The main income is the grandmother's Russian pension. As far as I know, it wasn't she who directed the video. No-one is justifying what she did, but there are things that she does not understand. There is no education, intelligence, full understanding of what she has done."

As for the scandal with Pozner in Tbilisi, from where the patriarch of Russian journalism had to flee, Kvarchelia went on to say:

“As far as I understand, this was organised by people who hold such very radical views. Elene Khoshtaria recently organised a similar action on our state-border with Georgia. Well, in fact, there are absolutely irreconcilable forces in Georgia that are not ready to see Abkhazia as a party to the conflict and with which, apparently, there is simply no point in holding any negotiations. This is a drama that is very cynically being played out by radical forces that continue Saakashvili's line."

Many observers note that Vladimir Pozner has long been vilified by Russian “jingoistic patriots” who cannot forgive him for his liberal reasoning and the fact that he dares to criticise many things in Russia’s actuality. But in Georgia, he, like Andrei Sakharov some time ago, cannot be forgiven for statements that do not coincide with the modern Georgian national project.