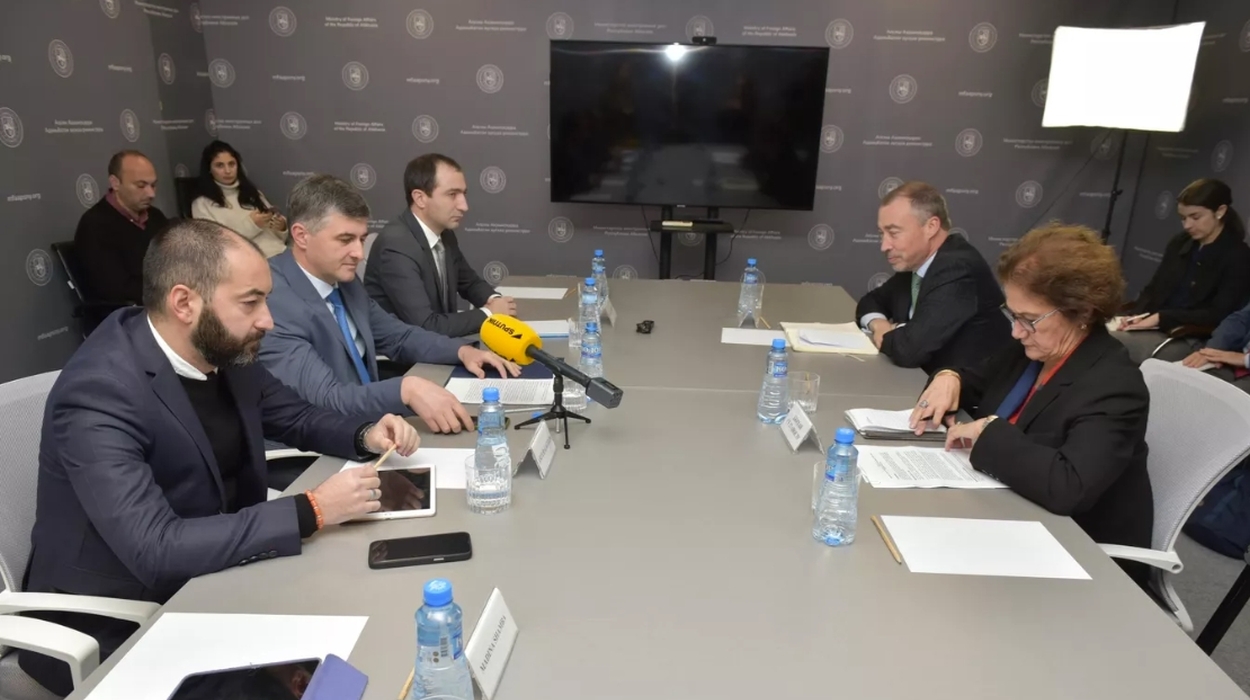 International Geneva Discussions took place at the MFA of Abkhazia on 9 November.

SUKHUM / AQW'A -- The 56th round of the International Geneva Discussions on Security and Stability in the Transcaucasus, which has been taking place since October 2008, took place on 5 October.

The meeting with the co-chairs of the International Geneva Discussions took place at the Ministry of Foreign Affairs of Abkhazia on 9 November.

Deputy Minister of Foreign Affairs of Abkhazia Irakli Tuzhba stressed that in early October, after a rather long break, it had been possible to hold the 56th round of discussions, which did not lead to "tangible results".

According to him, the key task of the discussions is to provide strong guarantees of peace and security for Abkhazia. The legal basis for security is a document on the non-use of force between Georgia and Abkhazia.

"Unfortunately, for many years we have not been able to achieve any serious results in resolving this key issue as a result of the extremely destructive position taken by the Georgian participants, who refuse to discuss any discussions on this document. At this stage, the many years of work on harmonising the text of the joint-oral statement on the non-use of force has actually been forgotten. As part of the discussions, a special working group was formed to develop and agree on the oral statement, but, unfortunately, this work has reached an impasse. Today we are invited to discuss issues that do not have any direct relevance to the document on the non-use of force," he said.

As Tuzhba noted, at a time when "a high probability of an escalation of tension due to Georgia's military activity" remains in Abkhazia, the agreement and signing of a document on the non-use of armed force is becoming increasingly important.

The Deputy Minister also touched upon the issue of freedom of movement for the citizens of Abkhazia. He recalled that in September the European Commission prepared recommendations for the European Parliament and the EU on non-recognition of documents issued on the territory of Abkhazia by the Russian embassy.

Tuzhba added that for Abkhazia, such a proposal by the European Commission was not anything new and unexpected, since since 2008 this practice has been applied to documents that are issued in the republic.

In this context, according to the deputy minister, the issue of recognising Abkhazian national passports as documents for travelling around the world is being updated.

"Unfortunately, we are faced with the fact that discriminatory approaches are used against our republic that violate the personal rights of citizens and hinder their right to free movement. We believe that this problem needs to be resolved as soon as possible. We are forced to state that we do not see any particular interest in solving this problem. Instead, they are trying to subject us to maximum international isolation and create artificial obstacles for the development of Abkhazia. We feel that international isolation around our republic and citizens continues to increase and we believe that it must be overcome as soon as possible,” he said.

EU Special Representative for the South Caucasus Toivo Klaar noted that the parties have many issues to discuss and expressed hope for their detailed discussion. He stressed that the initiative of the European Commission regarding passports is not directed against the inhabitants of Abkhazia, but is connected with the policy of Russia.

The UN representative at the discussions, Cihan Sultanoglu, added that every effort is being made to focus the process on results, to which all participants in the discussions should contribute.

According to her, meetings with the participants of the Geneva discussions have already taken place in Tbilisi, Tskhinval and are planned to be held with representatives of the US and Russia.

The Geneva discussions on security and stability in Transcaucasia have been held since October 2008 on the basis of agreements reached after the events of August 2008 in South Ossetia. At the moment, this is the only platform for dialogue between representatives of Abkhazia, South Ossetia and Georgia. Representatives of Russia, the United States, as well as the UN, the OSCE and the EU participate in the discussions as mediators.