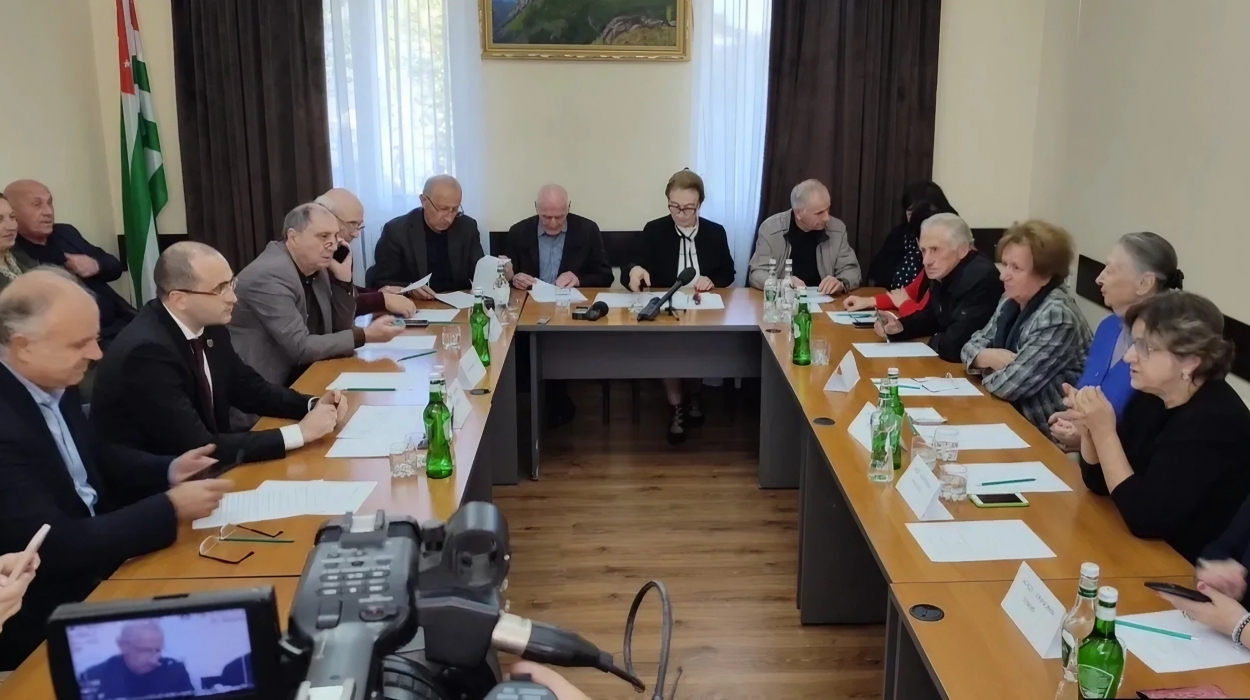 SUKHUM / AQW'A -- On the eve of the adoption of the law on foreign agents, which is being developed by the Ministry of Justice of the republic, ‘The role of civil organisations in modern Abkhazia’ was the topic for discussion by the Public Chamber.

Minister of Justice Anri Bartsits stated that he was a “supporter of strict regulation” of the activities of non-governmental organisations, whilst representatives of non-governmental organisations insisted that there should be no automatic transfer onto Abkhazian soil of the practice of applying a law in Russia, and that this very law should not in general be included in the ‘harmonization’-list, since it has nothing to do with the international agenda but rather regulates relations between government and society.

The role of civil organisations was discussed in the Public Chamber with the participation of Minister of Justice Anri Bartsits, whose department is developing a law on foreign agents as part of a programme to harmonise Abkhazian and Russian legislation. Representatives of several non-governmental organisations participated in the discussion on the civil society side.

The Minister of Justice is a supporter of a tough approach

Opening the meeting, Guli Kichba, secretary of the Public Chamber, let it be known that she had received a letter from leaders of non-governmental organisations, on whose initiative the meeting was organised.

Foreign Minister Inal Ardzinba, though invited to the Public Chamber, did not appear.

Ruslan Khashig, a member of the Public Chamber and Public Council under the Ministry of Foreign Affairs of Abkhazia, positively assessed the meeting as the beginning of a dialogue between the drafters of the law and civil society. He recalled that in October 2005 a law on non-profit organisations was adopted and said that the legislative agenda should not be so closely linked to the political one. Khashig noted that on the eve of the discussion of the topic on social networks there were “a lot of rumours and insults emanating from anonymous sources against respected people”, and he called on citizens not to participate in such exchanges, but to involve experts in the work on laws, which should be constructed on Abkhazian experience and not be calqued on Russian.

Minister of Justice Anri Bartsits spoke about how work is proceeding in his department on the law on foreign agents:

“I would like to say a lot about how much these civil organisations did that is positive for our country in the war and post-war period; it is difficult to overestimate their role in such matters as: [alleviating] hunger, demining, [provision of] medical assistance, and during the Covid-period the role of these organisations has greatly increased. I assure you that no-one has yet seen the actual amendments that are within the walls of the Ministry of Justice. The main work has been delegated to us, and we are still composing a conceptual vision of how our country will regulate public relations in this area. As for what types of registries there weill be in our country – shall we have four, shall we have two or three registries? – we are still pondering that too. There are questions about who will be the entity initiating the submission of these lists for inclusion, and who will be the entity entitled to go to court.”

Despite the expressed respect for non-governmental organisations, the minister said that he is a supporter of "strict regulation of public relations in this area".

Working in an atmosphere of surveillance and pressure

Arda Inal-ipa, co-director of the well-known and authoritative Abkhazian NGO, the Centre for Humanitarian Programmes [CHP], said that the atmosphere of surveillance by the special services, which has recently accompanied the activities of the CHP, is contrary to the Constitution of Abkhazia and the principles of democracy and freedoms enshrined in it:

“The atmosphere in which we live today is far different from those years when there existed in Abkhazia a spirit of freedom. I have in mind the endless wiretaps and even surveillance. If we agree on the phone to meet somewhere, we are already familiar with the numbers of these cars and so on. [Then there are the] calls for interviews and interrogations. We, quite frankly, refuse, because we know that, when we meet with representatives of international organisations, this, naturally, will be of interest to the State Security Service – it has always been thus, and we have always been open, have had meetings with them and have answered all their questions. But now we are becoming convinced that one has to do this [as it were] in a basement with electronic recording media. Thanks to Sergei Mironovich (Shamba), he often saved us from precisely this, because so far we still have people who are close to us, know us and trust us. But in some structures ­– we have already understood this ­– whilst there may as yet be neither amendments nor a law, we have already been listed as enemies."

Arda Inal-ipa said that she repeatedly invited representatives of the special services to come to the CHP to look at any documentation, but no-one ever came, which means that the point is not at all a desire to get information, but just to intimidate and apply pressure. “Who benefits from this? Who needs to raise the degree of political tension? We have a real lively political life, with opposition parties, civil organisations, such an approach will not solve a single issue.” Of this she is sure.

“What caused the need for strict regulation? I would like to hear the arguments. This law has been discussed for several years, but during all this time no-one has ever called representatives of civil organisations to discuss any problems. This is what we are asking ourselves, seeing an unhealthy interest on the part of the Minister of Foreign Affairs,” says Arda Inal-ipa.

She also noted that Telegram channels have recently been gaining weight in the information-field, and among these there are anonymous ones that are created specifically to combat civil organisations. Arda Inal-ipa is sure that the law on foreign agents is not rightfully included in the list of "legislative harmonisation”, as it concerns domestic policy-issues.

The co-director of the CHP, Liana Kvarchelia, understands that the Minister of Justice has been given a task and tht he is fulfilling it, but she is sure that not everything needs to be agreed with the strategic partner, and some fundamental things must be defended, especially when it comes to internal affairs.

Liana Kvarchelia noted that in Russia the law on foreign agents is used to combat all those who disagree with the actions of the authorities:

“We can’t fail to see the logic behind the development of this law in Russia, can we? What has happened in Russia today? They started with NGOs, then all the journalists got drawn, then all the opposition... Today, regardless of whether you receive or do not receive funding, it no longer matters – if you expressed some point of view that some supernumerary mayor of a city or town did not like, he will complain about you, and you will be included in the register of people under foreign influence. If this law is passed now, then all other amendments will also pass. In general, I do not even admit the thought that such a law will be adopted in our country. We need to understand the long-term consequences of everything we do.”

She gave an example of how the Abkhazian Foreign Ministry discredits non-governmental organisations by disseminating incomplete information:

“The Minister of Foreign Affairs recently gave a speech, telling us a terrible spy-story about sensors. He says that the sensors were brought by an international organisation, and this equipment can, inter alia, be used for purposes of espionage. No-one said anything more. I found out that the Institute of Ecology of the Academy of Sciences of Abkhazia had submitted a project to an international organisation; the staff of the institute, its specialists, had sat down and looked on the Internet to find out what type of sensors (meteorological) they needed and with with what characteristics. They had told the international organisation that they wanted such and such sensors. They brought them. One of the sensors was handed over to the State Security Service so that they could look over them there and have advance-warning about them. Six months passed, and – lo! – information is being tossed out that spy-equipment was brought to Abkhazia. Not a word is said about the fact that they were brought by order of a state-institution! If full information were given, then, probably, the impression of those receiving this information would be different. There you have it – on such a basis, shall we create registries and add this or that organisation to the list of undesirable organisations?”

Astamur Tania believes that the level of awareness about Abkhazia and attention to it in the world has sharply decreased in recent years, and this is due to the fact that the activity of contacts between the authorities and the international community has decreased. In the long run, this will harm Abkhazia. The Geneva discussions should turn into the Geneva negotiation-process, but this will be possible only when the law on occupied territories is repealed. These are the issues that should be being dealt with by the country's leadership and the Foreign Ministry.

He recalled not so distant tragic events:

“History has its own patterns, which we must remember. Do you remember the first Soviet constitutions? They contained articles restricting the rights of representatives of what were then called the ‘exploiting classes’. At first, no-one imprisoned these people; they were removed from work, sent somewhere into exile, so that it appeared it was a time of [sc. harmless] herbivores. Then outright purges began. Then these purges reached as far as the very organisers of these purges themselves. If this logic is once allowed free rein, it won’t not stop. Vladislav Grigoryevich (Ardzinba) got access to the KGB archive, where he read these documents. ‘I was horrified,’ he said, ‘about what was happening in Abkhazia. I do not want to raise this topic, because some people are alive who are the children, grandchildren [sc. of the victims]…’ This was in the 1990s. Such are these laws aimed at stigmatising people, putting some labels on them, destroying that on which Abkhazian society is constructed.”

According to Astamur Tania, Abkhazian society is based on solidarity and mutual assistance. If one starts dividing people, creating artificial obstacles to freedom of thought, if one tells people that they can only think within certain limits, and if anyone thinks otherwise, then they are an enemy, a foreign agent, such an approach undermines the competitiveness of society – take, for instance, North and South Korea. And he urged everyone to take care of one another and to preserve peace in Abkhazia.