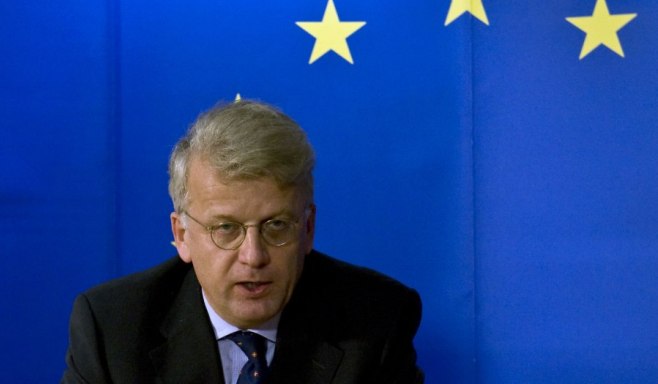 TBILISI --- Head of European observers Hans Jorg Haber this week was on a private visit to Abkhazia. Since the beginning of the mission's operation in Georgia, this was the first opportunity Haber had to visit Sukhum. Today he told reporters his impressions of the trip.

No official statements have been made about the visit of Hans Jorg Haber to Abkhazia. The fact that he travelled to Sukhum became known this Monday when he visited the Georgian church in the village Elyr (Ochamchira District) along with representatives of the Abkhaz de facto authorities. Restoration-works were recently completed there. The Georgian authorities have been concerned that after restoration the church has lost its previous appearance. According to the Georgian side, on one of the walls ancient Georgians inscriptions were painted over, whilst a cupola was erected on the church the architectural form of which is contrary to Georgian church tradition.

Hans Jorg Haber today for the first time said a few words about his visit to Ilori. He did not have the impression that there had been any attempt intentionally to alter the church from a Georgian one into a Russian one. Haber did, however, make the reservation that he is not an expert: "Of course, the restoration works at the church have not been conducted in accordance with the highest international standards. But my impression as an amateur is that there has been no deliberate Russification."

Haber also inspected the interior of the church and walked around the yard. He also spoke with the rector: "This man wants to keep the church as a place where believers gather. He is trying to preserve it, despite the dampness. As a result, a dome was actually erected. And it is often criticized. But I think the most important point is that the Georgian tombs are still in place. They have not been destroyed or moved. Inside the church, there are still icons with inscriptions in the Georgian language."

However, Hans Jorg Haber suggested that "perhaps, if an art-expert had looked at all this, he would have come to different conclusions."

Representatives of the Abkhaz de facto authorities reported that the trip of Haber to Elyr had not been planned. He went there after the regular five-party meeting in Gal this Monday. It was just at this meeting that a proposal of the Georgian side was discussed for a joint-visit to be paid to Elyr, but agreement on this issue could not be reached.

After the trip to Elyr, the head of the European observers went to Sukhum. During his two years of work in Georgia, this was his first trip to the city where all the major officials of the Abkhaz de facto authorities are based. Prior to that, he had visited only Gal.

Haber spent almost three days in Sukhum. He stressed that his visit was of an "unofficial character": "I've had several private conversations; they were not official. As you know, under the mandate of the Mission, we can exercise control in Abkhazia. But it was a private visit."

The Head of the European observers did not give the names of the people with whom he had spoken in Abkhazia. However, at the de facto Foreign Ministry they said that among his informal interlocutors were Minister Maxim Gvindzhia and almost all the participants in the regular meetings in Gal. The trip to Sukhum obviously complicated Haber's way of looking at the situation as a whole. Here are his words: "I now have an idea of the way Abkhazia, where I had never visited, sees it and of how far it is now from modern-day Georgia. It will be a very difficult and important task for us to reconcile the Abkhazians with Georgia."

But whilst recognizing the distance separating the Abkhazians and Georgians to be much broader than he had expected, the Head of the European observers, nevertheless, believes that prospects for a peaceful solution are attainable.