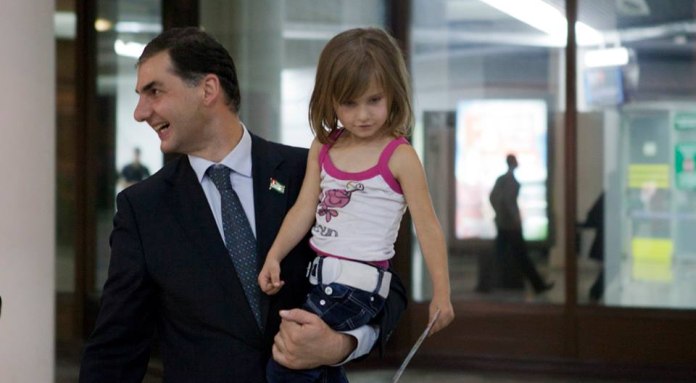 SUKHUM -- The first group of compatriots from Syria, numbering 27 persons (including 12 children) today arrived in Abkhazia. As was reported to ApsnyPress by the head of the regional department of the Foreign Ministry for Turkey and the Middle East, Inar Gitsba, this is the result of two governmental missions at the beginning of this year to the Arab Republic of Syria. During the first visit, the representatives of the Ministry of Foreign Affairs of Abkhazia and the State-Committee for Repatriation clarified the situation in Syria, and already during the second mission lists of those wishing to return were drawn up on the basis of questionnaires.

"But not all were ready to return at a single moment. And so, we divided the process into three steps. Today, 27 people, constituting 12 households, managed to return," said Gitsba.

Among those arriving from Syria are representatives of the families Marshan, Gechba, Aryutaa.

Representatives of the Ministry of Foreign Affairs of Abkhazia and the State-Committee for the Repatriation met our compatriots at Sochi airport. In the courtyard tourist-hotel "Aytar" representatives of the leadership of the republic, members of the public, students, namesakes were waiting for them.

According to Zurab Adleiba, the returnees to the homeland will live for four months in the hotel "Aytar", where they will go through a process of adaptation. From Monday, they will begin to study the Abkhaz language; on days off they will travel, get acquainted with Abkhazia, and meet the people.

"Today is a very happy day for us, although we understand that in Syria, whence come our countrymen, the situation today is very worrying. But we welcome every step that leads to the unification of our people, who are already in the second century of living divided,” said Co-Director of the Centre for Humanitarian Programmes, Arda Inal-Ipa, speaking to an ApsnyPress correspondent. “We are in need of each member of the representatives of our diaspora. And so, their return is a great holiday."

According to Arda Inal-Ipa, one needs to think about how returning compatriots might have every opportunity for integration into modern Abkhazian society so that they might occupy a worthy place and contribute to the development of the state. "The fate of those who return to their ethnic homeland is in the hands of the Abkhazians living here. I am filled with pride and happiness that tens of our compatriots are returning, although we lost so many people in the war! May God give us strength to do everything to facilitate their speedy adaptation," said the the Director of the Daur Zantaria Centre, Tsiza Gunba.