SUKHUM -- The trip of President of Abkhazia in Turkey, where many thousands of Abkhaz diaspora live, is important and can affect a positive solution of a number of issues of repatriation, said in an interview with the Apsnypress correspondent the political scientist and expert on the Caucasian issues Viacheslav Chirikba.

As a result of the Russian-Caucasian war in middle of the 19th century, the majority of the Abkhazo-Circassian ethnic group in the Western Caucasus were exiled from their historic homeland and forced to seek refuge in the Ottoman Empire.

Political analyst pointed out that for the past two centuries both sides of the Abkhazian people were developing in two different territorial and political dimensions - in Abkhazia, which they regard as their common Homeland, and in the Diaspora, mainly in Turkey, as well as in several countries of the Middle East - in Syria, Jordan et al. Abkhaz diaspora communities are also to found in Western Europe, the USA, Canada and Australia.

"The official Turkey data on this point is non-existent, because according to the Turkish Constitution, all Muslim citizens are regarded as Turks. As a result of my research work in Turkey, I have counted more than 200 Abkhaz-Abaza villages, which are located in twenty provinces (Adana, Amasya, Balikesir, Bilecik, Bingol, Bolu, Bursa, Corum, Eskisehir, Istanbul, Kocaeli, Kutahya, Manisa, Sakarya, Samsun, Sinop, Sivas, Tokat, Yozgat, Zonguldak)."

"Talking about the evolution of the political role of the Abkhaz and, in general, the North Caucasian diaspora in Turkey, we can say that it went through several stages," - said Chirikba.

Circassians, Abkhazians and Ubykhs known under the general name of "Circassians" played a prominent role in the life of the sultan's court, the administration and especially in the army of the Ottoman Empire. A number of Turkish sultans were married to Abkhazian women. For example, the Abkhazian Fyul-Dana was the wife of Sultan Mehmet III (1566-1603) and the mother of Sultan Mustafa I (1591-1639). And two wives of the 36th Sultan of the Ottoman Empire, Mehmed VI-th Vahideddin (1861 - 1926) were from the Abkhazian families of the Marshan and Chykhchaa. 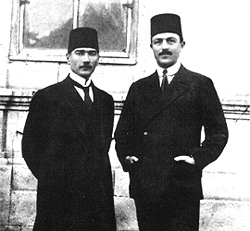 During the Young Turk revolution of 1908 - 1909 within the circle of influential followers of Mustafa Kemal, better known by the nickname Ataturk (Father of Turks) have also been Abkhazians and Circassians. Ataturk's comrade Rauf Orbay, whose Abkhaz name was Ashkharua, served one time as Prime Minister of Turkey.

"As the Abkhaz historians have discovered, after the Russian Bolshevik revolution of 1917 a major role in establishing good relations between Soviet Russia and Turkey had been played by prominent Abkhaz Bolsheviks Nestor Lakoba and Ephrem Eshba, acting through the Abkhaz Diaspora" - the political scientist said. However, further differences with Ataturk about the nature of the new Turkish state led the North Caucasians to a break with Ataturk and to significant repression of the latter against them.

"The role of the North Caucasians was even more diminished after the military coup in Turkey in 1980 and the repressions against the Caucasian cultural institutions", - he added.

According to Chirikba, only Perestroika of Mikhail Gorbachev and the fall of the Iron Curtain opened up new avenues for communication between the Caucasian diaspora and the Homeland.

"Sea passenger communication between Abkhazia and Turkey was opened and for the first time since almost a hundred year of complete isolation from each other, the Abkhazians became able to freely visit their kinsmen in Abkhazia and Turkey, find relatives and make new friends. The turning point was the visit of the Speaker of the Abkhazian Parliament Vladislav Ardzinba to Turkey in 1991, when he was received by a number of ministers and heads of some oppositional parties, "- he said.

Chirikba noted that, immediately after the start of the Georgian-Abkhazian war of 1992-1993, there started a movement of volunteers from Turkey and Syria, who were arriving to Abkhazia to provide military assistance to Abkhazians fighting for the independence of their country.

"On the one hand the Turkish government took a pro-Georgian official policy, despite the sympathy of the majority of the Turkish society, as well as the Turkish press in this conflict on the side of Abkhazia. On the other hand, Turkey did not prevent the sending of volunteers to Abkhazia, the fund-raising campaigns to help our country and the massive protest campaigns, which were regularly held in all major cities of Turkey ", - said Chirikba.

At the end of the Georgian-Abkhaz war in 1993 direct passenger sea links between Turkey and Abkhazia were resumed. However, in 1996, at the insistence of Georgia, Turkey has closed this important channel of communication between the citizens of Abkhazia and Turkey, effectively joining the comprehensive blockade of Abkhazia imposed by the CIS countries at the request of Georgia.

Chirikba, visiting Turkey not once, noted the excellent organization of the diaspora. Today, in many large cities in Turkey there are branches of Abkhaz cultural societies and clubs (dernek). Their objectives are mainly cultural and educational - to maintain the native language, traditions, culture, songs and dances, organizing concerts, festivals and exhibitions, conferences and roundtables, publication of various books, as well as the implementation of cultural ties and contacts with the Homeland and the maintenance of the fundamental idea of the return to the land of their ancestors.

The Abkhaz expert notes the ambivalence of the Turkish policy towards Abkhazia.

"Diplomatically, the State is wholly on the side of Georgia, supporting the controversial thesis of its territorial integrity. Controversial, because one cannot maintain what does not exist in nature: as is well-known, the former Georgia has long been split into three independent states, and it is impossible to ignore the political reality for a long time ", - considers Chirikba.

He is convinced that the process of repatriation of Abkhazians is irreversible, that it is extremely important and crucial for the reviving Abkhaz nation as the restoration of historical justice and the reunification of the divided people as a result of the past war.

"In addition, the demographic situation in Abkhazia, which is rousing considerable alarm, requires a certain amount of new Abkhaz population" – the expert said.

Viacheslav Chirikba believes that Abkhazia should address the problem of repatriation more seriously and more responsibly. "I think we need to improve both the authority and the responsibility of those engaged in this extremely important task of the state" - he stressed.

"I do not think that the repatriation process will lead to a significant increase in the influence of neighboring states, or to the risk of creating here radical Islamic fundamentalist circles. The threat of radical political Islam is indeed present in some neighboring regions, but it is not and cannot be in Abkhazia, since this country simply does not have any social or religious basis for that", - said Viacheslav Chirikba.