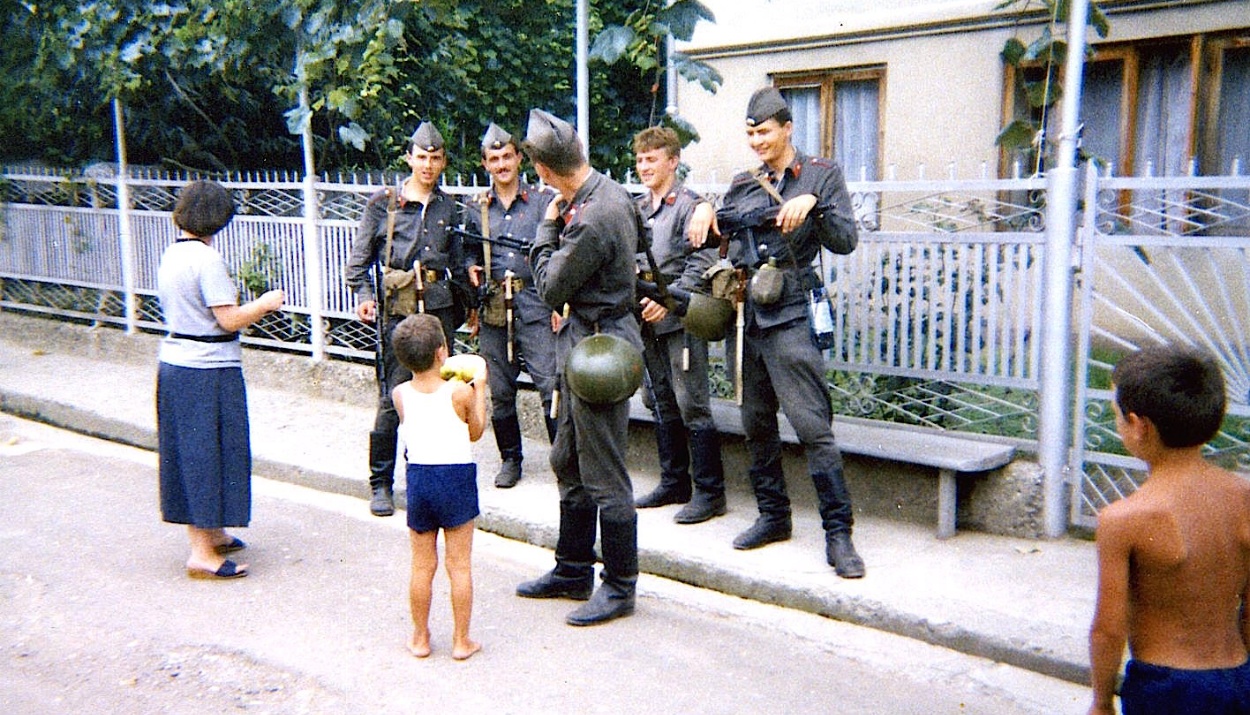 Soviet soldiers patrolling in Ochamchira, after the fighting that broke out in Sukhum (15-16 July 1989)

Text of interview in Georgian with B.G. Hewitt, shewn on Abkhazian TV 11 August 1989 and published in Russian in the paper Byzp on 22 August.

Question: Fourteen years have now elapsed since you first came to Georgia to learn Georgian, and virtually the whole of Georgia knows that during this period you have published a great deal concerning the languages of the Caucasus. This year without, as they say, being invited you considered it necessary to involve yourself in our complicated politics by sending your 'Open Letter' to the Georgians. Why was that?

Answer: It is true that I am a linguist -- firstly a Kartvelologist, secondly an Abkhazologist. and so I am interested in everything which affects the fate of these two peoples. In England every Friday I receive the paper 'Literary Georgia', and a number of articles published in this paper earlier this year left a rather nasty taste in my mouth -- especially following the revelation of the so-called 'Abkhazian Letter'.

Because of the tone of these articles and on the basis of my 14-year experience it was clear that at this particular moment the Georgians would not listen to the Abkhazians. Since I was (and remain) convinced that I know the source of the present unpleasant relations, I decided to compose my 'Open Letter'.

The English have a saying: "A little knowledge is a dangerous thing." Why have I alluded to this piece of folk-wisdom? Well, on a number of occasions I have heard from even educated Georgians that it was news to them that Abkhaz has the status of a literary language or that Georgian is not an obligatory subject of study in Abkhaz-language schools. It, therefore, seemed to me that, if there exists such ignorance about the state of affairs in Abkhazia, many also are probably unaware of what took place in Abkhazia at the time of Beria, Chark’viani and Mgeladze, as a result of which the Abkhazians have no faith in the Georgians. I had something to say and said it.

Q: What do you think of the reaction produced by the publication of your 'Letter'?

A: I have already sent to Tbilisi for publication in LG a reply to some of those who have attacked me, and so I'll say no more in detail about that here. However, I deem it necessary to stress one point in particular -- in the West it is absolutely unheard of for replies to be published in the same issue of a paper or journal in which is published the cause of those replies. The publication together with my 'Open Letter' of three replies represents a gross violation of one of the fundamental principles of international ethics. Why were they afraid to publish it without comment? We all know why!

Q: Of course we know. But although you have no wish to give concrete answers to your critics today, in general what is your opinion about the abuse you have received in the press and on the television?

A: True -- mud is the only thing they throw my way these days! But they forget that in England there is no soap-deficit, and so all of this filth will easily wash off. Unfortunately, the same cannot be said of that which remains with those who sling the mud.

Q: What do you mean exactly?

A: When you respond to seriously expressed criticism with abuse and attempts to besmirch the name of the critic, this is a sure sign that you are bereft of convincing counter-arguments, and by reacting in this way you are simply proving the truth of your opponent's case. And I am not speaking just of my own 'Open Letter', in which incidentally there was not one word that could be called anti-Georgian but which has nevertheless been called a pasquinade -- take the 'Abkhazian Letter', Ardzinba's speech to the Moscow Congress of Peoples' Deputies, the letter of Bok’uchava-Gagulia, lvanov's interview on the BBC about the killings in Sukhum, Ozgan's interview, etc..., all of these are "one-sided, tendentious, subjective" solely because they do not support the Georgian position.

I recall the TV-appearance of several members of the Georgian National Front on 21 July. One writer, a woman, said that a moral defeat is always worse than a physical one. Well, when one side comes out only with abuse and insults, it seems clear to me that that side has already suffered the moral defeat.

Q: In general how do you view the situation obtaining in Georgia, especially as it affects Abkhazia?

A: In a word, everything is a paradox. When at last a worthy leader stands at the head of the Soviet government and is trying to give the Soviet people more freedom, Dzhansugh Chark'viani writes in LG of the 4 August that "today Georgia is suffering, suffering as never before". Well, I took a look this way and that but could see no waves of Mongols: nowhere to be seen were Shah Abbas or Agha Mohammed Khan; no Turkish horde was laying waste to western Georgia! And so, what's the problem?

We are told that humanism and internationalism reside in the blood and genes of the Georgian people, and they boast of the fact that representatives of more than 100 nationalities live in Georgia. At the same time they parade with banners saying "Georgia for the Georgians!", In 'Young Communist' of 29 July Revaz Mishveladze writes that steps be taken to increase the Georgian share of Georgia's population to 95%. Marik'a Lortkipanidze acknowledges that the Abkhazians are the aborigenes of Abkhazia but immediately adds: "Don't forget though that Abkhazia is Georgian soil!" Let's accept for argument's sake that the ancestors of the Svans and Laz shared this territory with the Abkhazians -- so what? Everyone knows that in the 5th century BC the Celts occupied Europe from Austria in the east to France in the west. Today where are the Celts? -- in Scotland, Ireland, Wales, Britanny. Does anyone today claim that only Celts should be allowed to hold the reins of government in western Europe?!

A group of Georgian scholars replies to the 'Abkhazian Letter' in the paper 'Dawn of the East' and nowhere mentions Beria -- how is it possible to reach the root of this problem unless we examine what he did in Abkhazia from 1933? Georgians say to me: "For what should we apologise if no-one asked our permission, when we too suffered a great deal at that time, and when Beria did nothing for the benefit of Georgia?" To me it is obvious that, when discussing the tragedies of the 30s, it is necessay to distinguish two layers, the Soviet and the Georgian, i.e. if we wish fully to understand the position of Abkhazia. In the Soviet Terror innocent people were slaughtered everywhere (and not least in Georgia proper), but the attempt to georgianise Abkhazia was an entirely different phenomenon. Today who is yelling: "We represent 43% of Abkhazia's population!"? The English? The Turks? The Russians? No -- and it is for this reason that I wrote that the Georgians have to recognise that what was done in Abkhazia was done in their name.

In one sentence of this or that article one can read (for example) such statements as: "We have no right to incite a quarrel between generations who have to live together tomorrow and thereafter", or: "The desired peace will be re-established in Georgia." But how do such authors go on to finish their articles?! Read any article dealing with Abkhazia published in LG on 4 August (particularly page 2) or the article of Ak'ak'i Gelovani in 'Mass Education' on 9 August. As for television, following the tragedy in Sukhum who was the first commentator on moambe? -- Nodar Natadze! I could hardly believe my ears! And he is a member of the committee of the National Front!

Q: What is the solution in your opinion?

A: Everything which I have read in the official press and in the pamphlets of the informal groups or that I have heard on Georgian television makes me think that I have wasted the last 14 years of my life learning the Georgian language and culture. Even so I can't bring myself to believe that nowhere in Tbilisi, in Georgia, is it possible to find real intellectuals, real patriots, people endowed with the real values of Georgian culture. [Interviewer: They do exist.] I hope that they not only exist, but that they come forward, find their voice and teach their people what their cultural traditions demand of them at this critical time. Such people will probably succeed in finding a common language with the Abkhazians, as a result of which the desired peace will be re-established in Georgia. If not, it is difficult to imagine not merely the future of Abkhazia but that of Georgia as a whole.

The original text in PDF can be downloaded by clicking here (6.4 MB)