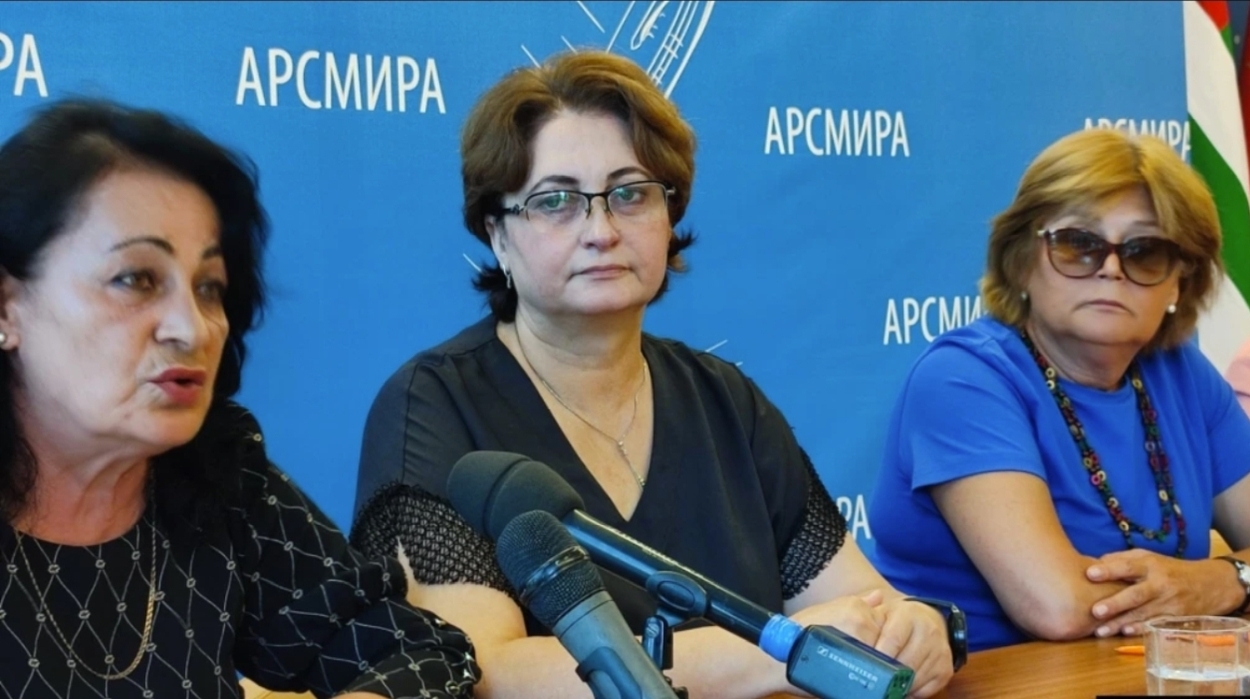 SUKHUM / AQW'A -- At a briefing in Sukhum participants in a meeting with Russian Ambassador Mikhail Shurgalin held on Monday spoke about it – they were: Veteran of the Patriotic War of the People of Abkhazia Larisa Tarba, journalist Izida Chania and a member of the Apsny Party Naira Amalia. The women tried to convey to the ambassador that the opinions of Abkhazian society and the country's leadership differ over the issue of the transference of territory in Pitsunda in favour of Russia and that the corresponding agreement is contrary to the interests of Abkhazia and its people.

The Abkhazian ladies, known for their social activity, initiated the meeting with the Ambassador of the Russian Federation in Abkhazia, Mikhail Shurgalin, to convey to him the concern and mood of protest in society in connection with the transfer of 186 hectares of territory in the Pitsunda-Mjussera Reserve along with the state-dachas built in Soviet times in favour of Russia together with houses in which Pitsunda resident are living. The agreement on the transfer of ownership of this territory together with a section of the Black Sea was signed by the leadership of Abkhazia in January of this year and became public only after it came before parliament for ratification, which caused a storm of indignation. For two months now, protests against the ratification of this agreement have not stopped. The statements of Ambassador Mikhail Shurgalin on the issue of the transference of Pitsunda only added fuel to the fire, triggering another wave of outrage. This is what prompted the Veteran of the War of the People of Abkhazia Larisa Tarba, member of the Apsny Party Naira Amalia and journalist Izida Chania publicly to approach the ambassador with a request for a meeting.

The participants told reporters at the briefing how this meeting went.

Larisa Tarba said that she tried to convey the opinion of the majority of veterans to Ambassador Mikhail Shurgalin:

“We explained to him that the land of Apsny is not for sale and will not be transferred. Today I can say with accuracy that 80-90% of veterans are against the sale of real-estate and the transfer of territories. I explained to him that our Abkhazians died here when we had a war, and next to us our Russian brothers fought and died side by side. They are buried here, which is to say that the land soaked in the blood of our lads is not for sale! I understood from the whole meeting that the agreement was signed – the President, the Prime Minister and the Security Council, he spoke with them – they signed the document and were agreed on this document. According to them, the people are simply discussing the agreement but are not against the signing of it. He told us that he had no right to cancel the agreement but that he would convey the opinion of the people to Vladimir Vladimirovich Putin and the leadership of the Russian Federation. ‘It all depends on the decision of the parliament’, he said.”

The result of the meeting with the ambassador was summed up by journalist Izida Chania. She said that the ambassador made it clear during the meeting that decisions on two dozen other projects would depend on how the Pitsunda issue was resolved:

“The ambassador made it clear to us that he is not interested in the opinion of the public, that his main steer and his main reference point is the parliament. He called the parliament a ‘litmus-test’ for the Russian Federation. How the vote on the draft-law on the ratification of the agreement on Pitsunda goes will be used to judge further projects that Russia intends to implement in Abkhazia. He talked about two dozen projects, but he specifically named only two: the railway-project and the airport-project. He directly linked the issue of the Pitsunda dacha with issues that should also be adopted in parliament – these are issues related to land and real-estate. He stressed that this is why the Pitsunda issue is significant for them. The ambassador did not leave room for any of our illusions, saying that this is the interest of the top leadership of Russia. He argued in support of Russia's desire to get ownership of the Pitsunda dacha, in my opinion, with the highly unconvincing argument that Putin wants to hold meetings at the Pitsunda dacha, but not as if being on the territory of Abkhazia but rather on the territory of the Russian Federation. ‘I'll even quote: “Putin needs Pitsunda",’ the ambassador said.”

Izida Chania also noted that during the conversation, Mikhail Shurgalin resorted to blackmail:

“I would like to note that the ambassador's speech contained elements of the most blatant blackmail. He asked several times how we would react if, as a result of the fact that our parliament did not ratify the agreement, the FSO of Russia would leave Pitsunda? He spoke about the Russian military base that could be abandoned by Russian troops. He made it clear that the planned investment-projects will not be implemented if the parliament does not adopt the draft-law on ratification, and accordingly, does not pass laws related to the sale of real-estate to foreigners and land. In my opinion, the ambassador's tones were quite eloquent and contradicted the interview he gave to RIA Novosti. He even hinted, again in the form of a question: ‘How will you react if you stop receiving Russian pensions?’.”

Despite all the above, Izida Chania believes that the meeting was useful, as the ambassador was given to understand that the opinion of society and the opinion of the country's leadership on the issue of the alienation of Pitsunda and the sale of real-estate to foreign citizens do not coincide. She added that she did not consider it necessary to appeal to the Russian ambassador, Abkhazia having a president who is obliged to protect the legitimate interests of the country and citizens.

Naira Amalia's opinion did not coincide with the impression of Izida Chania, saying that the meeting "was held in a very good atmosphere", and the ambassador tried to "probe" the visitors and patiently listened to all the women. Naira Amalia conveyed the words of the ambassador that the Accounts Chamber of Russia refuses to finance repairs to the buildings of the Pitsunda state-dachas and insists on their privatisation:

“For me personally, the main thing is not to lose Abkhazian lands. They want to repair these buildings, but the Accounts Chamber considered that they could not finance these dachas in this form; for this they need an agreement and transference of these buildings to ownership. And we explained that there are other ways; there is an agreement that is higher than this agreement; there are interstate-agreements. The people have one interest – to preserve the land for future generations, so that we should not make this mistake – we all conveyed this. We came to take the heat off so that we don’t have clashes, something we don’t need in Abkhazia!”

Naira Amalia explained that the signed document had not been discussed with society:

“The agreement was kept secret for half a year, and our reaction is justified by this. Before taking on life-changing questions, any president should discuss it with the public, especially in our small society when all sorts of rumors can be heard. The ambassador said: ‘Don't you need an airport, don't you need a railway?’ We do need an airport, but we want planes to increases speed on this site, on this land, and that this land remain ours! We even touched upon Abkhazian holy men, pointing out the existence of a place of spiritual power near Pitsunda; we explained this to him, and he became very interested in who the holy men might be and in the nature of such a ‘place of power’. He isn’t aware of this either.”

According to Naira Amalia, both Russia and Abkhazia have laws that provide a term of 10 to 15 years for criminal liability over the sale of land. At the moment, more than fifteen people, supporters of the authorities, have publicly advocated the transfer of the Abkhazian lands, all of whom have violated the law. But the prosecutor's office is not working, although it could involve itself in this case.

Naira Amalia provided information about the women having prepared an appeal to President Aslan Bzhania with a request that he withdraw from the People's Assembly a draft-law on the ratification of the agreement on the transfer of an object on the territory of the Republic of Abkhazia to the ownership of the Russian Federation and the procedure for its use on the grounds that it is inconsistent with the Constitution, by virtue of violating laws as well as the rights of both the Abkhazian ethnic group and all citizens of the Republic of Abkhazia. Signatures will be gathered together beneath this letter.