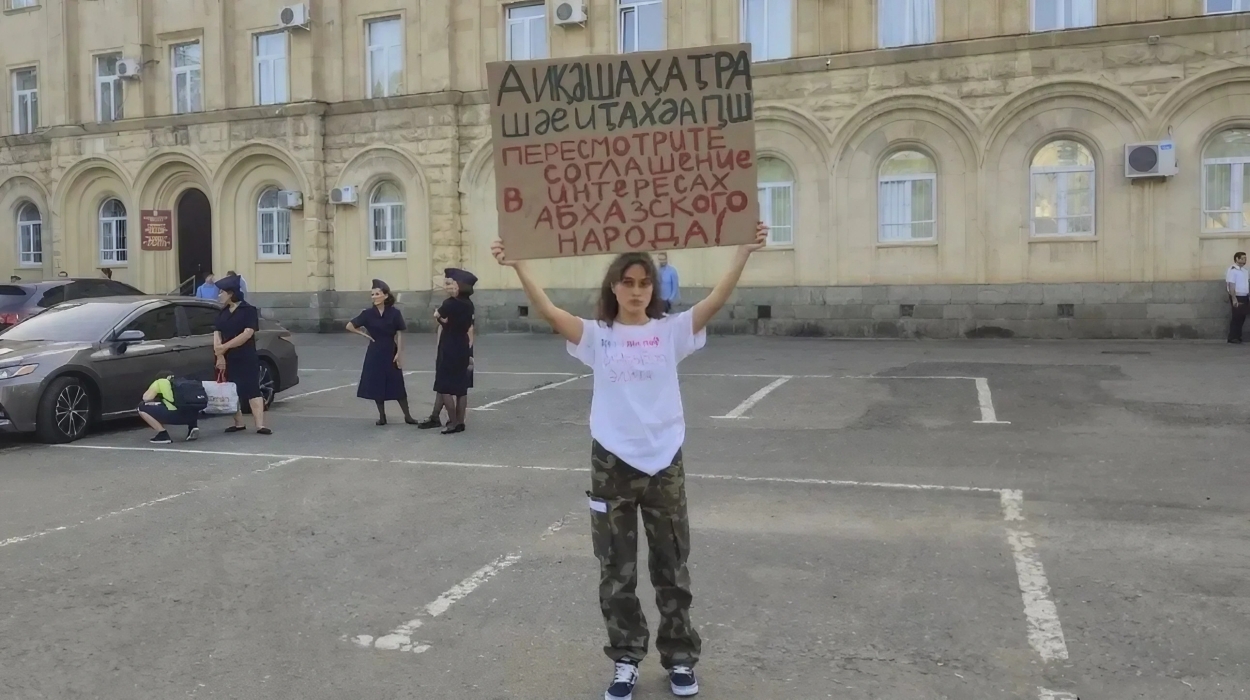 SUKHUM / AQW'A -- Last Saturday, a collective statement was published by representatives of the Abkhazian opposition-forces. The parties Forum of National Unity of Abkhazia and Apsny, the public organisations Aidgylara. Arwaa, AND, Union of Youth and Veterans of the Patriotic War, Aiaaira, Akhiatsa, the expert-fund Aamta, and the Committee for the Protection of the Sovereignty of the Republic of Abkhazia again spoke about the ratification in Parliament of the agreement on the transfer of the state-dacha Pitsunda to the ownership of the Russian Federation.

Here are some excerpts from the statement:

“Never before has there been such a protest in Abkhazian society in connection with initiatives of the Russian Federation. Relations between our countries have always been exclusively friendly, good-neighbourly, and no-one in Abkhazia wants them to be overshadowed by poor-quality legal documents that contradict the spirit of our fraternal relations...

Once again, we are bringing our collective position on this agreement to the public. We have repeatedly expressed our negative position on this issue at various venues. Moreover, A.G. Bzhania, President of the Republic of Abkhazia, was repeatedly publicly addressed with the demand to withdraw from Parliament the draft-law on the ratification of this agreement as being inconsistent with (a) the requirements of the Constitution, (b) current legislation and (c) the state-interests of the Republic of Abkhazia...

The procedure for making use of the Pitsunda state-dacha is regulated by the Treaty of 1995 and to this day has not caused any complaints. Its, validity rubs until 2035 with the possibility of a subsequent extension. If one of the parties to this Agreement wishes to make changes, they can always be carried out in accordance with the exact coordinates of the object, established legal procedures and subject to the laws of the two countries. As regards the Agreement under discussion, our position has remained unchanged. We are convinced that only its withdrawal from the RA Parliament is able to resolve the current crisis situation.”

Some observers, however, recalled for clarification that in the autumn of 2014, no less violent protests arose in Abkhazian society in connection with the initial draft of the Abkhazian-Russian basic treaty. And among the Internet community, there are also alternative opinions. The quintessence of such was voiced in one of the Internet comments under the nickname 'Mick Jagger'. I will quote it in an edited form, since the author's spelling leaves much to be desired:

“What will we do if Russia takes it and makes friends with Georgia? All the more important for her now is have a good neighbour in Tbilisi, being a land corridor to Turkey. How can we be so sure that this will not happen? Also what I can’t understand is – have the Russians done so little for us that we couldn’t give them some sort of dacha? Oh, we’re in for a shock to set us jumping, it seems to me!"

“one should know the history of Abkhazia, the history of the struggle of the Abkhazian people for independence. And that we will protect every inch of our land.”

We contacted public and political figure Nugzar Agrba today to find out his opinion on the situation over recent days in connection with the “Pitsunda issue” following the return of Abkhazian parliamentarians from the State Duma of the Russian Federation:

“I listened attentively to the press-conference of our deputies. I really liked the logic of Leonid Lakerbaja, and Kan Kvarchia was very convincing there. Well, as for the transfer ... I am against alienation. The dacha is a dacha – take care of it. And to transfer territory, to violate the Constitution of Abkhazia, even in the name of the most noble of goals - of course, I am against this. Despite the fact that Russia is our strategic partner, we must respect her, but they must also respect us. I did not like the way Konstantin Zatulin behaved at the meeting in the State Duma. ‘Give us the dacha without discussions’ – such was his air. At the same time, I think that the State Duma sincerely wanted to sort out this situation with the dacha. Of course, in Abkhazian society there is such an opinion: ‘So what, give it back, think about it - it’s a big deal!’ But Russia won't take anything from us if we don't give it away thoughtlessly. Nobody is insisting that we give it away, give it as a gift... The fact is that everything should be according to the law, according to the Constitution of Abkhazia. Here is my opinion. Lakerbaja very subtly dwellt on what we need to do in order not to quarrel, and to preserve our dignity.”

“Most likely, ‘Mick Jagger’ is not an Abkhazian, and maybe he does not live in Abkhazia. I would answer him that one should know the history of Abkhazia, the history of the struggle of the Abkhazian people for independence. And that we will protect every inch of our land."