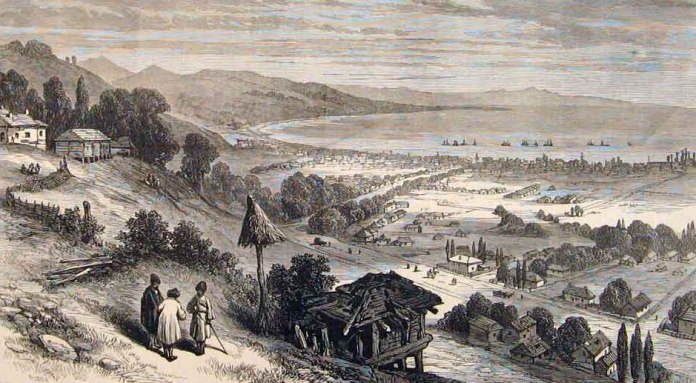 THE RUSSO – TURKISH WAR
THE REVOLT IN TRANSCAUCASIA . – THE ALLEGED RUSSIAN ATTROCITIES

The Times correspondent with the Russian army in Asia, writes from Okoum, on the 3rd inst.: - “A proclamation in Ochemchiri, signed with the name of one Ressin Effendi, Chief of the Staff of the 200th (sic) Division, was found attached to the door of the house which he had occupied. It states that the writer was for six years Military Attaché at St. Petersburg; that the Turks came to Abkhasia, not simply to make the inhabitants of Abkhasia revolt, but more because they wished to show to Europe where the Mussulman faith was in reality to be found. The writer of the document then proceeds to take exception to some of the doings of the Russians, and calls them barbarians, against whom the forces of Europe ought to be directed. The special charges, of which the writer says that he has had evidence in Abkhasia are: -
“1. That the Russians have burnt all the villages in the country.
“2 That they have fired upon the hospitals established at Ochemchiri.
“3. They have left the Turkish dead unburied, and eventually burnt them.
“4. That the Russians have no prisoners, having killed all the wounded whom they took. 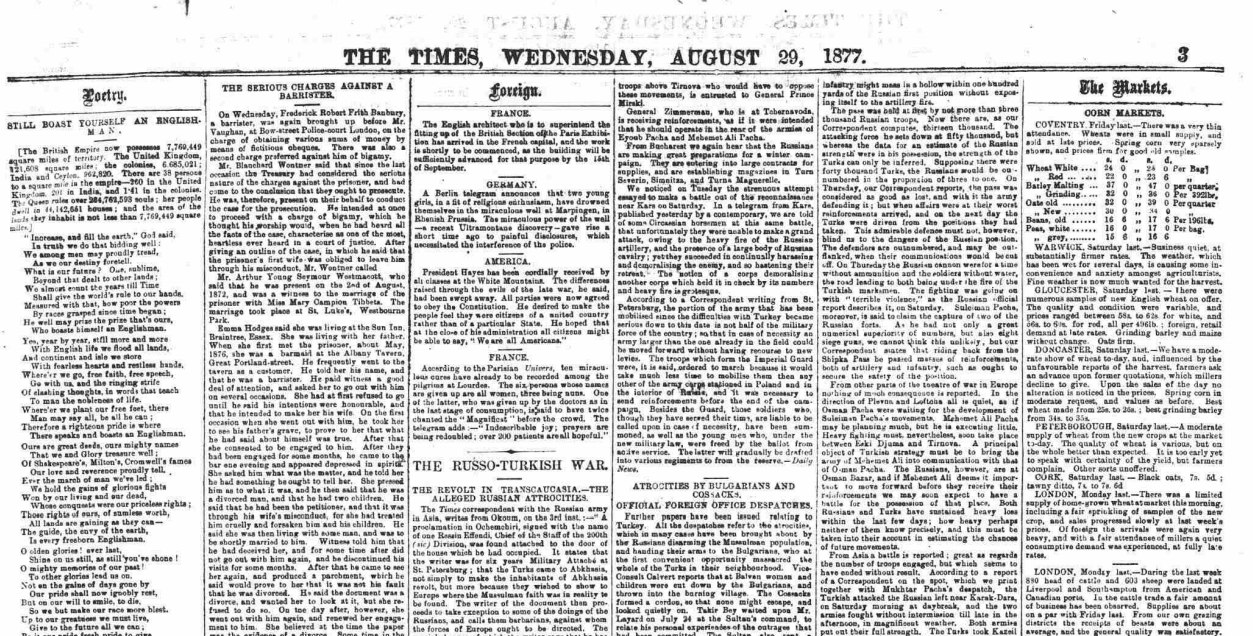 “ Now, since all these so-called atrocities are stated to have been perpetrated in Abkhasia, where I have instituted a diligent enquiry, I may be able, perhaps, to aid people to understand the better the true state of the case. First, as to burning the villages. No one denies, or wishes to deny, that this is the plan which has been adopted in Abkhasia for punishing the natives who have refused sub-mission. The practice of burning and pillaging is one on which the minds of men are not in accord. Where art treasures exist, as in the Summer Palace near Pekin, and the Tuileries, such a course approaches vandalism; and when I witnessed the sad havoc committed at the former place, I felt a deep sorrow that our army could ever have committed such an act. But here in Abkhasia the case is widely different, and it may be argued that it is not only the most ready, but a just way of punishing insurgents. Next, as to firing on the hospitals. I should like to have the opportunity of asking Mr. Ressin Effendi what steps were taken to make the position of the hospitalks known to the Russians. Thirdly, as to leaving the Turkish dead unburied, and burning them. This statement is true, but it requires explanation. The Russian camp at Illori, and the Turkish one at Ochemchiri, both on the coast, were separated by a distance of three miles; the Russians being established on the left (south) bank of the river Gelera. Both sides of the river are wooded, and the Turks, though their camp was three miles off, used to advance in the forest and shoot across the river, at a distance of 200 or 300 yards. After the battle on the 27th of June there were a number of Turkish dead on the north (right) bank of the river. The question which I leave for other people to settle is, “Whose duty was it to bury these dead” ? Neither side did so, and on the fourth day the stench was so intolerable that the Russians placed dry wood over the corpses, and they were burnt. Lastly, as to killing the wounded. No concealment is made of the fact that the rebels are shot or bayoneted when taken. I have only heard of one Abkhasian prisoner; he was not wounded. And I do not know that he had really been concerned in the revolt, and his freedom was given to him on the 23rd July at Okoum, so that the instructions were conformed with to have no prisoners. Nor are there are any Turkish prisoners, wounded or not, in the Russian Camps at Abkhasia. I have, however made certain that there is a Turkish prisoner at Sugdidi, in hospital. He has six bullet wounds. It is only just to add that some of the Russian solders themselves do not like the idea of killing the wounded. “Why kill them?” one of the said to me; “they are not to blame, they are soldiers just like us. Besides, they have feelings like us. My mate was wounded on the 27th, and two Turks found him. They washed his wound, tore his shirt to make a bandage, and put him on his way. They wanted to take his rifle, but he said his life would not be safe; so they let him keep it, and told him to keep out of the way of any Abkhasians, as they might do him harm.” It is said that 500 Abkhasian families are ready to surrender their arms; but I have already seen how little credence is to be put in such promises.”