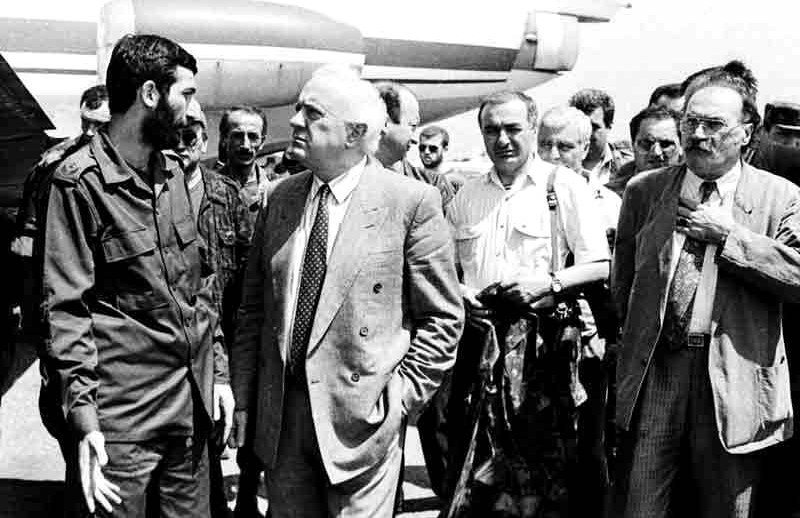 ...Additionally, the Commander-in-chief of Georgian troops in Abkhazia, General Georgiy Karkarashvili warned in a televised formal address to the Abkhaz and Georgian people in Sukhumi on August 24, that “no prisoners of war will be taken” by the Georgian troops, that “if 100,000 Georgian lose their lives, then [on the Abkhazian side] all 97,000 will be killed”; and that “the Abkhaz Nation will be left without descendants.” The delegation saw a video recording of this ominous speech.

...The Mission obtained sufficient evidence to conclude that gross and systematic violations of human rights had occurred at the hands of Georgian troops in Abkhazia throughout the period since August 14, 1992; that these included serious violations committed against Abkhazian and other ethnic population groups in cities and villages; that civilians were the primary victims of Georgian abuses; that Georgian attacks were directed against persons identifiable as Abkhazian, and that particular attack was directed against Abkhazian political, cultural, intellectual and community leaders; that in addition to Abkhazians, also Armenians, Russians, Greeks, Ukrainians, Estonians, and other non-Georgian minorities in Abkhazia have suffered similar treatment by Georgian authorities; and that removal or destruction of the principal materials and buildings of important historical and cultural importance to Abkhazians has taken place in what appears to be an organized attempt to destroy Abkhazian culture and national identity.

...When Georgian troops under general command of Defense Minister General Tengiz Kitovani first entered Sukhumi on August 14, Georgian soldiers attacked non-Georgian civilians, beat them, killed many, robbed them, and looted their houses and apartments. Reports of attacks on Abkhazian, Armenian, Russian, and other non-Georgian minority civilians, including killing, torture, and burning, looting or smashing of houses or other belongings, originate from many regions of Abkhazia under Georgian military control and for the entire period since August 14.

...Medical authorities in Gudauta reported that virtually all men who had come through the Gudauta hospital, after having been held prisoner by Georgian authorities, appeared to have been severely tortured. Many had sustained multiple broken bones and burns from cigarettes or other objects on various parts of their bodies. Some had their ears partially or completely torn off.

...The “out of control” explanation is not satisfactory, however, because evidence points to authorization or encouragement by the Georgian authorities forattacks on Abkhazian and other non-Georgian civilians. Georgian soldiers who are reported to have entered Abkhaz homes and to have beaten, raped, or otherwise terrorized the inhabitants and to have looted or destroyed their belongings, are repeatedly reported to have had a list with them of names and addresses of Abkhazians to visit in this manner.

...The attacks therefore did not appear to be at random. Georgian soldiers andpolice are reported to continue to ask persons in the streets, in particular in bread lines, to show their identity papers. When an Abkhaz is found he or she is seriously abused. The result is that the greatly diminished number of Abkhazians left in Sukhumi hardly dare to leave their rooms. Concerning the direction given by Georgian military authorities in relation to the conduct of battle and the behavior of troops during and after battle, Georgian Minister of Defense Kitovani is reported to have told his troops that under the law of war soldiers have the right to loot for three days. The Geneva Convention forbids the use of cluster bombs, yet Abkhazian medical authorities in Gudauta report having treated a number of cluster bomb wounds in victims brought from battle areas. Cluster bombs reportedly were used extensively during late August by Georgian forces and have continued sporadically since then.