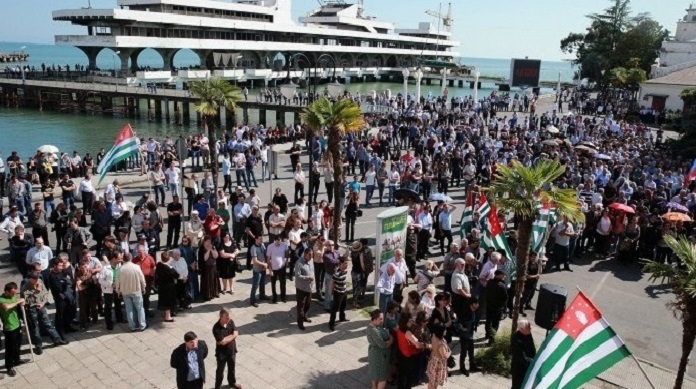 The president left, but the sediment remains. Even those who strongly disliked Ankvab say so.

Why do so many people, even those who did not vote for him, feel offended? Because no one asked their opinion. Because an anti-constitutional solution was imposed on them. Because they were threatened with the use of force. Perhaps many people who are perturbed by the coup would have rejoiced if Ankvab lost the election. But there was no election. And the game was not played by the rules.

Over the last few days my friends and I met with different people, some from the opposition, some from the authorities. We tried to find a legal way out of the situation. We were alarmed that in a short period of time important institutions had collapsed in our country, that we were suddenly thrown far back in our political development, that the existence of the state was under threat. We were afraid that there would be clashes.

On the third day after the occupation of the administration building and the television, it was already clear that Ankvab would quit the presidential post. But why did the opposition not want to stay in the constitutional field? There was a chance to negotiate the resignation of the President and the transfer of powers to the prime minister - that chance was rejected. Why in recent days was it impossible to reach agreement with the President on calling a pre-term election, without forcing him to accept an ultimatum immediately? I am absolutely sure that it would have been possible to find a legal way to bring about an early change of government. Why was the opposition in such a hurry? Were they so afraid of the man they called “a deserter"? Did they want to humiliate Ankvab by means of an ultimatum?

I would like to know whether those guys who occupied the Presidential Administration and television realize that they ended up there not because people were afraid of them, but because the President did not order security officials to resist. It is important that the "victors" understand that. Because otherwise there will be a state of euphoria at the awareness of their own "strength" and the temptation to use it again and again. Guys, take a look at history. You call each other "heroes.” It's not funny, it's sad.

A lot of different things happened during those days. There were people on the streets peacefully protesting against injustice - I share their objections. There were young people who sincerely believed they were acting in a just cause. There were those who forced their way into government buildings. There were those who skilfully directed these people. There were representatives of the “power” ministries who tried to prevent things escalating by holding negotiations. And there were people who were blinded by hatred and the desire for revenge. There were numerous meetings with intermediaries – as a people we still have to reap the fruits of those agreements. There was a people that could see much further than its political elite could, and which is now at a loss because of the politicians’ unforgivable myopia.

Yesterday morning, I spoke with one of the opposition, appealing to his ability to think in terms of statehood. I asked him to think about how important it is for our country not to cross the line, delineated by the Constitution. After all, the opposition could get what it wants while remaining within legal bounds. They didn’t want to, they were in a hurry. I requested naively: give the people a chance to vote for you as people who respect the Constitution! I remember 2003, when we similarly tried to persuade the Amstakhara party not to demand the pre-term resignation of Vladislav Ardzinba. On that occasion we lasted out until the election.

I do not know who will win the upcoming election, but I do know that our country has lost a great deal. Ankvab once said in one of his addresses "in order to destroy me, my opponents are ready to destroy the state." I did not think that his words would prove to be so prophetic.

There are many difficulties ahead. We have created dangerous precedents. We are walking on very thin ice.

We shall have to work for a long time to rebuild what has been destroyed. A good friend of mine said yesterday: “God forbid that future generations will have to say, ‘But all the same we had our own state for 20 whole years."

This article was published by Asarkia and is translated from Russian.