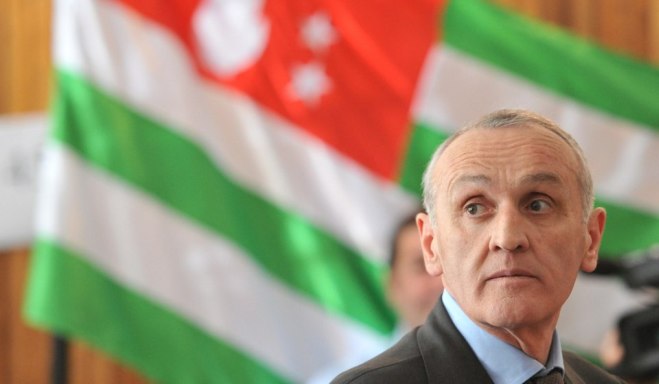 RFE/RL -- Meeting in emergency session late on May 29, the parliament of Georgia's breakaway region of Abkhazia passed a vote of no confidence in the region's government.

It also called on de facto President Aleksandr Ankvab to resign in order to resolve the two-day standoff between his supporters and the opposition Coordinating Council headed by Ankvab's longtime rival, Forum of National Unity of Abkhazia co-Chairman Raul Khajimba.

In an interview with "Izvestia," de facto Prime Minister Leonid Lakerbaya has indicated his readiness to yield his post at any time to an opposition representative qualified to fill it, but noted that the cabinet can only be dismissed by presidential decree. Ankvab for his part continues to refuseeither to dismiss the government or to step down himself.

The opposition has already formed a 21-person Provisional Council of Popular Trust  headed by Khajimba. Other members include Deputy FNEA Chairman Daur Arshba, Vitaly Gabnia, chairman of the organization Aruaa representing veterans of the 1992-93 war that ended in Georgia's loss of control over the region; Party of Economic Development of Abkhazia Chairman Beslan Butba; and former Foreign Minister Sergei Shamba, who came in second to Ankvab in the August 2011 presidential ballot. (Khajimba finished third with less than 20 percent of the vote.)

In its first public statement, the Provisional Council accused Ankvab on May 30 of "having lost touch long ago with the Abkhaz people and with reality." It called on him to avail himself of the chance to take "the only step in his career that will benefit his people," and resign.

The opposition plans to form within two days a provisional government that will remain in power until a new presidential election is held, Gabnia was quoted as telling Interfax. He also said that it will be formed on a coalition basis, with one-third of the portfolios going to members of the present government -- an arrangement that may be intended to win over the "power" ministers who are close allies of Ankvab and on May 28 reaffirmed their  loyalty to him.

In line with the region's constitution, the presidential ballot must be held no later than three months after Ankvab's resignation. But at present the parliament cannot muster the required two-thirds vote to impeach him. On May 29, just 20 of the total 35 parliament members voted in favor of his resignation: despite Khajimba's efforts to coerce them, most of the deputies from the pro-presidential Amtsakhara party failed to attend the session.

The parliament vote calls into question whether the proposed direct talks with the opposition to which Ankvab (who is reportedly currently at one of the Russian military bases in Abkhazia, having fled the presidential palace during the night of May 27-28) agreed on May 29 will now take place.

Similarly unclear is what behind-the-scenes role Moscow's two representatives, Vladislav Surkov and Rashid Nurgaliyev, have played since their arrival in Sukhumi on May 28. On May 29, the opposition Coordinating Council suddenly demanded the signing of a new treaty between the breakaway Republic of Abkhazia and the Russian Federation, which recognized Abkhazia as an independent sovereign state following the August 2008, that would raise the "strategic partnership" to a new level. The council also advocated Abkhaz participation in the CIS Customs Union and the Eurasian Economic Union.

Relations with Russia did not figure on the long and detailed list of criticisms of Ankvab's policies that the Coordinating Council made public one month ago. Those criticisms focused primarily on Ankvab's high-handed leadership style and the lack of a coherent policy to kick-start Abkhazia's stagnating economy.

True, Surkov publicly declared that Moscow had no intention of interfering in the domestic politics of the independent Republic of Abkhazia. But the possibility that he undertook to engineer Ankvab's resignation in return for a commitment by the new leadership to closer integration with Russia cannot be dismissed out of hand.