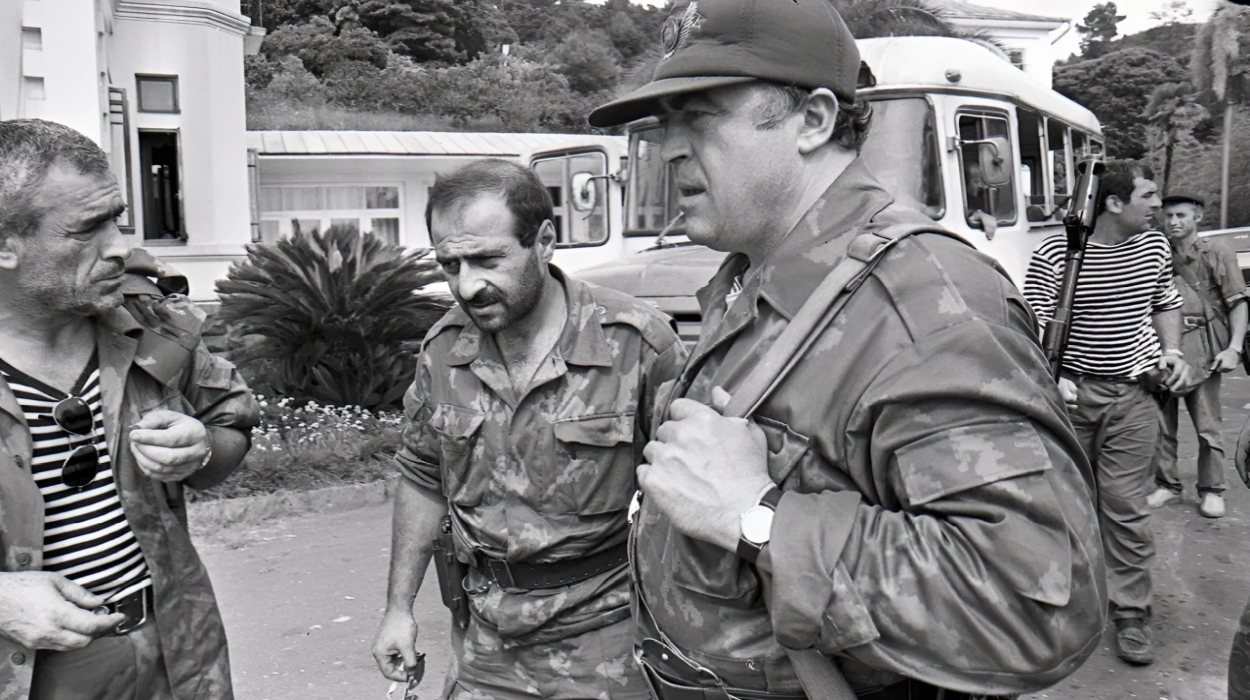 Georgian Brutality and Local Support (from Chapter 6 -  pp.163-165)
[with additional notes and sources by AbkhazWorld]

The brutality and local support of Georgian forces underlined these fears of the Abkhaz. Neither Abkhazia nor Georgia had a regular army when the war began in August 1992, and reports of looting, killing, and torture continued when Georgian forces established control over the east and west of Abkhazia. These forces included the Georgian National Guard and the local and Georgia-based Mkhedrioni, whose legal status as the Internal Troops–National Guards and the Rescue Corps of Georgia, respectively, was formalized in 1990 (Darchiashvili 1997). These and other armed groups that sprouted at the end of the Soviet Union, however, acted outside central control (Driscoll 2015). Insubordination of fighters and disorganization were big problems as a result. As an Abkhaz fighter observes, “Georgian forces that came to Abkhazia were not the same army that Georgia currently has. Today Georgia’s army is well trained [and] equipped, [whereas] those forces consisted of crooks. Most were criminals, marauders released from prison to fight in Abkhazia. . . . It was a complete breakdown of the army itself. They did not subordinate to one another.”

The first months of the war were wreaked by disorder in the Georgian-controlled territory. Human Rights Watch (HRW 1995, 22) documents the violations by Georgian forces in Sukhum/i: “Within days after Sukhumi was taken by Georgian National Guard troops, and as additional Georgian forces flowed into the city (including the Mkhedrioni), a pattern of vicious, ethnically based pillage, looting, assault, and murder emerged. . . . Although Georgian forces appeared to be operating under no particular command, they did seem to have a clear agenda. They roamed through the city at will, especially at night, looting and pillaging.” Locals have similar memories. One woman gasped when she recalled “watching how crazy people, drugged [from] smok[ing] and [shooting up with] needles, were running through our city, getting into our houses to humiliate and kill.” Such accounts are common across Abkhazia (Voronov, Florenskij, and Shutova 1993). In the east, “Abkhaz civilians were killed en masse in the Ochamchira region” (Argun 1994, 13). “Marauders were here the first days,” residents of the Gagra district say, and “supplies ended, commercial shops were looted.” “They robbed, drank, partied, raped women,” west front commanders report. “We went to homes where people were robbed, tortured. They hid when we came in,” journalists record of the distress.

In this context, the Abkhaz-controlled territory felt relatively safe for the Abkhaz and other non-Georgian minorities who did not want to take the Georgian side or participate in the war. “In Gudauta,” a Russian woman who fled from the capital says, “there was a feeling of home, order, it was calm there. No one robbed anyone, there was no horror like in Sukhum.” “Armenian village[s] saw horrible destruction. . . . Many came to Gudauta and told me these stories,” a member of Abkhazia’s presidium says. As a nurse stationed at the Gumista front line from the first days of the war confirms, “I saw how frightened Armenians ran from Sukhum. Georgians gathered all Armenians in a village, said, ‘Give us money and you will live.’ Armenians gave the money, but then other Georgian groups came. And in the end there was no more money or gold left. They burned some Armenians alive in their houses. And so they ran, and we helped them cross the river.”

Gia Karkarashvili [General - Army Commander of the State Council of Georgia]:In the first place, the Ossetian war [1991-92] in Tskhinvali had just ended. The Georgia National Guard suffered heavy losses. We were exhausted. That’s why I thought it was reckless to go into Abkhazia. But I was told that the 13th-14th August was a good time to launch a military operation because the Russian Parliament was in recess. Unfortunately, we entered Abkhazia in a very disorganized way. We didn’t even have a specific goal and we started looting villages along the way.As a result, in the space of a month we managed to make enemies of the entire local population, especially the Armenians.

Whereas some non-Georgian minorities joined the Abkhaz forces as a result, most Georgians supported Georgia (Achugba 2003). As a local of Gagra who formed the Armenian battalion notes, “We know who participated, who did not, who took what measures. Everyone knows what was happening on their street, in their neighborhood, who did what. Gagra is small. About 90 percent [of Georgians], they all supported Georgia, except in different forms. Some stood with a weapon, others with words, others were looting. No matter what they did, about 90 percent participated.” Many regular Abkhaz believe that local Georgians prepared for the war. An Abkhaz researcher explains: “After the war, I was looking for [disappeared] Georgians. . . . [Local Georgians] showed me houses where weapons were stockpiled and lists of Georgians, militarized groups, and units that were created. They told me that they prepared before the war, created these lists. Therefore, before the war, they armed their local population to then get support from the inside.”

There is a myth that Georgians “happily welcomed the tanks that entered Abkhazia” and “threw flowers” when the war began, and Abkhaz guards report local Georgian participation from the war’s onset. “If the first attack was by [Georgia’s] Kutaisi battalion [in Sukhum/i], the second involved local Georgians”; “[when] the Abkhaz . . . retreated from [Gagra] . . . Mkhedrioni men and armed local Georgians appeared in the city” (interview in Khodzhaa 2003, 184, 203). More local Georgians were reportedly implicated as the war progressed. Even in Gal/i, which was at first neutral, displaced local Georgians recall, “weapons, money, food, clothes, cigarettes were collected here and sent to the front. Some young even participated.”

The full video is at https://abkhazia.co.uk/chronicle-of-war

The implications of local Georgian participation in the war were severe for the Abkhaz. As the Armenian fighter above says, “If local Georgians had not supported the Georgian side, nothing would have happened here.” A Georgian who fought on the Abkhaz side concurs: “There would have been no war if the local Georgian population had opposed it.” The Abkhaz imagine what would have happened “if residents of the Gal region had stood up and said ‘What are you doing?’ to their brothers, ‘These are innocent people. We live here, too, as one society’”; instead, “Georgians achieved their aims by the hands of locals. There were many groups, organizations in every village, district. They stood up against the Abkhaz people.” In this situation, three options existed for local Georgians. “Some openly rejected nationalism and either left or fought with us,” a Ukrainian explains, “[but] most . . . actively supported and were morally on the Georgian side.” This affinity with Georgia’s goals in the war and participation in the fighting reinforced the Abkhaz fear: “Their brutality made it clear that Georgians hated us.”

Georgian leaders added to this fear. On August 15, President Shevardnadze said that “in the struggle for the preservation of the territorial integrity of our state we will not stop before anything. For this we are willing to die ourselves, but also eliminate anyone” (Brojdo 2008, 53). The statement of commander Giorgi Karkarashvili that he would sacrifice “100,000 Georgians [to kill] all 97,000 [Abkhaz]” was aired on television in Sukhum/i on August 24 (Amkuab and Illarionova 1992, 28).

Continuing attacks at the Bzyb/Bzipi and Gumista front lines after the signing of a cease-fire agreement in Moscow on September 3 suggested that the Georgian threat would be realized no matter what (Volhonskij, Zaharov, and Silaev 2008, 244–246; Pachulija 2010, 84). “As if it was their country and they could do anything here,” west and east front commanders illustrate that nothing could stop Georgia’s fight for territorial integrity, “they managed during the ceasefire to gain a foothold [and] strengthen their positions.” As Anna Brojdo (2008, 52) summarizes the Georgian threat, “The problem of the bio-ethnic survival of the Abkhaz people was very clearly delineated from the first days of the [war]— due to the cruelty of [Georgia’s] troops and the local Georgian population in the occupied part of Abkhazia and to official statements of the Georgian leaders.