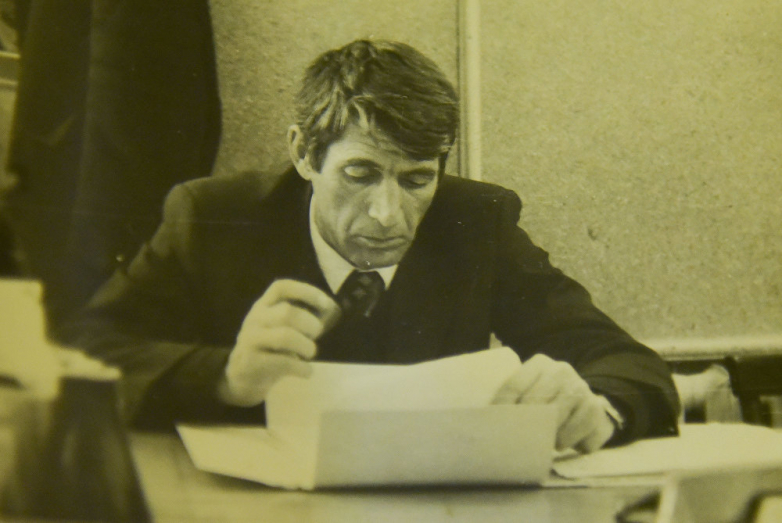 On 9th October 1992, Taif Adzhba, along with the Abkhaz people who lived near him were led from their homes by Georgian occupying forces, sat on a bus and driven to an unknown location. To this day their loved ones know nothing certain about their fate. According to unconfirmed sources, after a long and grueling period of torture, he was shot.

It is unlikely that anyone in Abkhazia does not know at least one work of Taif Adzhba. Many of his lyrical poems have been set to music. And his verses and poems for children are considered to be some of the best in Abkhaz literature.

From the Amnesty International Report (July 1993)

GEORGIA
@Alleged human rights violations during the conflict in Abkhazia

Amnesty International has repeatedly addressed the Georgian Government over numerous allegations of human rights violations in Abkhazia, a region in the north-west of the country which has been the scene of sporadic armed conflict since August 1992.

The organization has received numerous serious reports that Georgian armed forces have been involved in the arbitrary detention of non-combatants, some in the condition of hostages, on the grounds of their ethnic origin; in beatings, torture, ill-treatment and rape of detainees; and in extrajudicial executions.  The majority of these reports relate to incidents that took place between August and November 1992. Amnesty International has no knowledge of investigations being carried out into the allegations and believes that no one has been prosecuted.  A number of possible prisoners of conscience are also believed to be held still, or to have "disappeared".

Possible prisoners of conscience
In the first months of the conflict Georgian forces are said to have detained scores of noncombatant civilians solely on grounds of their ethnic origin.  Amnesty International has received numerous testimonies from non-Georgians who allege that armed Georgian troops entered their homes, or those of their neighbours, and subsequently robbed, beat and took away many of the occupants solely because they belonged to a different ethnic group.  Many were held for short periods then released.  Others are believed still to be imprisoned, or to have "disappeared".  The Georgian authorities have not responded to Amnesty International's repeated requests for information about their current situation and whereabouts.  If they are still in detention, and were originally held solely on ethnic grounds, the organization would regard them as prisoners of conscience who should be released immediately and unconditionally.  Several such cases are outlined below.

Garri Anatolyevich Pilia
Garri Pilia, born in 1961 and an ethnic Abkhazian, was said to have been staying with friends in Dranda, a town to the south of the Abkhazian capital of Sukhumi, when Georgian troops entered the autonomous republic in August 1992.  Around 18 to 20 August, according to his friends, Garri Pilia left to return to his home town of Tkvarcheli but was detained by Georgian troops and kept as a hostage because he is related to a member of the Abkhazian parliament which has moved to Gudauta.  At least one other person is also said to have been detained solely because of such a relationship.  A former detainee of Dranda prison reported hearing that Garri Pilia was also being held there, but his exact whereabouts and situation are currently not known.  A number of people have alleged ill-treatment of detainees at Dranda prison (see below).

Taif Adzhba
Taif Adzhba, an Abkhazian poet, was reportedly beaten and subsequently detained by Georgian forces at his flat in Sukhumi on 9 October 1992, solely on grounds of his ethnic origin.  He was taken away to an unknown destination, and it is not known if any criminal charge or charges were brought against him.   Taif Adzhba was aged 55 at the time of his detention, and had published at least one book of poetry in Abkhazian.   One unofficial report suggested that he may have been released some six weeks after detention, but Amnesty International has not been able to obtain confirmation of this, or other details on his current whereabouts. Several other non-combatant civilians are said to have been taken from their flats in Sukhumi by Georgian forces solely because of their ethnic origin as Abkhazians.  They include Artyom Badzhgovich Dzhopua, arrested on 8 October 1992, and Dzhoto Amichba and Grigory Samsoniya who were both detained later in that month.  No other personal details are available about these men, and their current whereabouts remain unknown.

Allegations of torture, rape and extrajudicial executions
Numerous allegations of torture and ill-treatment, including rape, have been made, along with reports of extrajudicial executions, against troops from the Georgian army, the National Guard headed by the then Minister of Defence, and a paramilitary group known as "Mkhedrioni" ("Horsemen").  The majority of these relate to the first four months of the conflict, when the situation was said to have been exacerbated by lack of government control over undisciplined troops.  For example Dzhaba Ioseliani, then Deputy Chairman of the ruling Georgian State Council and commander of the "Mkhedrioni" units, admitted in a newspaper article published on 5 September 1992 that troops had been involved in looting.  Speaking in November 1992 in Sukhumi the head of the State Council, Eduard Shevardnadze, said that tightening of discipline among officers and men of the Georgian armed forces deployed in Abkhazia was to be a priority.

The paramilitary group "Mkhedrioni" has subsequently been restyled into a civil defence body, and in May 1993 Eduard Shevardnadze issued a decree on the creation of a single national army whose structure should comply fully with Georgia's obligations as a member state of the UN and the CSCE.

However, to Amnesty International's knowledge no alleged perpetrators of torture, beatings and killings during the Abkhazian conflict have been brought to justice.  The organization is concerned that unless the government exercises real and effective control over the armed forces, including by vigorous prosecution of alleged perpetrators, the scope for human rights violations could reoccur if the military situation again deteriorates. A number of the allegations of torture, including rape, and extrajudicial executions made to Amnesty International are set out below

M.K. Dzhindzholiya of Sukhumi reports that he was out walking on 17 August 1992 with his 67-year-old uncle, G.D. Dzhindzholiya, when they were stopped by members of the Georgian National Guard close to the Institute of Experimental Pathology and Therapy.  He alleges that both he and his uncle were detained solely because of their ethnic origin as Abkhazians, and that they were beaten, kicked and subjected to a mock execution.  After this they were taken in a bus with some 42 other detainees to Dranda prison.  He reports that on the way an elderly man was viciously kicked and beaten with gun butts when on being asked where he lived he replied "in Abkhazia".   M.K. Dzhindzholiya says that on arrival at Dranda prison the detainees were forced to pass one by one between two lines of Georgian guardsmen who beat them severely as they went through.  M.K. Dzhindzholiya was released in an exchange of prisoners on 21 August.

Murman Zadrovich Kvitsiniya, also an ethnic Abkhazian from Sukhumi, reports that on 26 August 1992 he was in a group of some 35 people detained near the Kodor River by Georgian troops (it is unclear whether these 35 were involved in combat operations).  They were taken to a military headquarters where they were beaten and, he further alleges, one man named as Adgur Khvartskiya was shot dead for answering "The Republic of Abkhazia" when asked where he lived.  The following day they were taken to Dranda prison where in a corridor at the entrance, Georgian guards formed lines either side and beat the detainees with automatic rifle butts as they passed through.  Murman Kvitsiniya reports that he suffered a fractured skull as a result, and that other detainees sustained broken ribs and collar bones.  He was released on 28 August along with 17 others in a prisoner exchange.

Sh.G. Kverkveskiri, an ethnic Abkhazian from Gagra, reports that he was at the home of an elderly relative on 29 August 1992 when seven armed Georgian guardsmen broke in demanding weapons.  Both men were made to lie on the floor.  One guardsman allegedly approached them with a knife and threatened to kill them if they did not hand over any weapons. The guardsmen then punched them repeatedly and beat them with the butts of their automatic machine guns.  Sh.G. Kverkveskiri and his relative were then taken to Georgian military headquarters in Kolkhida where he reports they were again beaten and told that they would not be released until his son, who was fighting in the Abkhazian guard, was brought to them.  He was held there for three days, during which time he reports suffering a broken rib from the beatings, then taken to the police station in Gagra and eventually exchanged.

Ayba Sh. Lyutik, an ethnic Abkhazian from Sukhumi, reports that four armed Georgian guardsmen broke into his flat at 3.00am on 4 September 1992, beat him around the head with their automatic machine guns and then held him at gunpoint while they searched and robbed his home.  He was then taken away in their vehicle which was subsequently stopped by the police. All went to the police station where Ayba Lyutik says he was again beaten by a man in military uniform in spite of police efforts to restrain him.  Ayba Lyutik was then taken to a military headquarters where he alleges that he was beaten and subjected to electric shock treatment because he did not give the answers wanted by those questioning him.  He also reports that three detainees were killed there: a man named Ochava who had been subjected to the same ill-treatment and two ethnic Russians, a father and son.

On 7 September 1992 L.I. Topuridze, a sanitary inspector with the Abkhazian home guard, was reportedly captured in an ambush by Georgian troops who ill-treated and raped her. She died on 8 September after being taken to Sukhumi hospital No. 1.  A forensic medical report is said to have found bullet wounds; injuries to the spinal cord, vagina, nose and the bones of the extremities; contusions to the head; and a ruptured hymen. On 3 November 1992 during fighting in the village of Shroma in Sukhumi district Georgian armed forces are said to have captured B.T. Kvitsiniya, born 1966, from the village of Aatsy in Gudauta district.  They are said to have taunted and beaten him, then summarily hanged him.

Amnesty International wrote to the Georgian authorities in December 1992 about all these cases.  The organization urged the Georgian Government to take immediate steps to initiate a full and prompt enquiry into these and all similar allegations; to make the findings public; and to bring to justice the alleged perpetrators within the norms of international law. Amnesty International also urged the government to ensure that all law enforcement officials are aware of, and conform to, international standards on the use of force and firearms; and that all military forces carrying out police activity are made aware that they are under the same obligations as the civil police.  The Basic Principles on the Use of Force and Firearms by Law Enforcement Officials, adopted by consensus by the Eighth United Nations Congress on the Prevention of Crime and Treatment of Offenders on 7 September 1990, stipulate that the government should ensure that such personnel use force only when strictly necessary and only to the minimum extent required under the circumstances.  Lethal force should not be used except when strictly unavoidable in order to protect life.  Any use of firearms and any death or injury resulting from the use of force must be reported, and the arbitrary or abusive use of force/firearms must be punishable as a criminal offence.  The authorities have not yet replied.

The full report in PDF can be downloaded by clicking here (35.2 Kb)