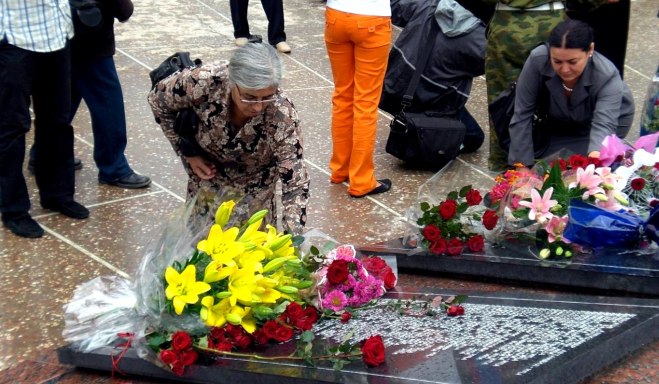 SUKHUM -- Today marks the 20th anniversary of the liberation of Sukhum from Georgian State Council troops.

On 27 September 1993, the Abkhaz army liberated the capital, Sukhum, at the cost of huge losses. The operation to liberate Sukhum from Georgian State Council troops lasted 11 days. It was headed by then Defense Minister Major-General Sultan Sosnaliyev and the Chief of General Staff of the Armed Forces of Abkhazia, Major-General Sergei Dbar. During the day of 27 September 1993, the Abkhaz forces overcame the resistance of the enemy and liberated Sukhum. That event marked the de facto victory of the Abkhaz army in the war against the Georgian aggressors. During the following three days the Abkhaz army advanced to the River Ingur, and on 30 September raised the flag of the Republic of Abkhazia on the state border with Georgia.

Today, starting in the morning, people laid flowers and wreathes in the Park of Glory in Sukhum. Veterans of the 1992-193 Fatherland War of the People of Abkhazia came, the mothers of fallen soldiers, President Aleksandr Ankvab, Parliament speaker Valerii Bganba, Prime Minister Leonid Lakerbaya, parliament deputies, members of the government and society, guests in the capital, numerous school children and even kindergarten pupils.

In the evening, at 19.00, the final of the “20 Years later” competition of military songs will be held on the square in front of the S. Chanba Theatre. After that, spectators will be offered a concert program that will be briefly interrupted for the live transmission of a boxing match between the Sukhum and the Greek teams.

At 22.00 on the same square there will be a fashion show of hand-made national costumes.