Various events have been planned to take place in Abkhazia to mark the 20th anniversary of the victory in the 1992-1993 war imposed on the Republic by the Georgian leadership (headed by Eduard Shevardnadze) on 14 August 1992. The capital Sukhum (Aqwa in Abkhaz) was liberated on 27 September, whilst the last of the invading forces fled back into Georgia three days later.

The liberation of Sukhum saw the central administrative building on what was then Lenin Square gutted by fire. The accompanying photograph illustrates how the structure has essentially remained in the same state for exactly two decades — the photograph was taken at midday on 27 September 2013. The same applies to much of the regions that suffered most of the destruction in the war, from large parts of Sukhum eastwards through the regions of Gulripsh and Ochamchira. This is the result of the squeeze on Abkhazia's economy that has seen the country shunned by an uncaring and decidedly pro-Georgian West and included years of blockade imposed by a similarly inclined Kremlin regime under Boris Yeltsin. Whilst the situation improved once Vladimir Putin achieved the Russian presidency and the Republic was rewarded by full Russian recognition under President Dmitri Medvedev on 26 August 2008 following the Russo-Georgian 5-day war centred around South Ossetia and Abkhazia's Upper Kodor Valley, there is a feeling that aid-funding expected from Russia may not have been flowing recently as fluidly as hoped, though Putin, now again holding the Russian presidency, promised the Abkhazian president, Aleksandr Ankvab, at their meeting in August that Russia would abide by all its undertakings. The economic situation has, it must be acknowledged, taken some of the shine off the pride in having achieved twenty years of independence, and the mood was darkened at the beginning of the month by the assassination of the 1st Secretary at the Russian Embassy and his wife by an ethnic Chechen, subsequently apprehended in Batumi (Georgia). 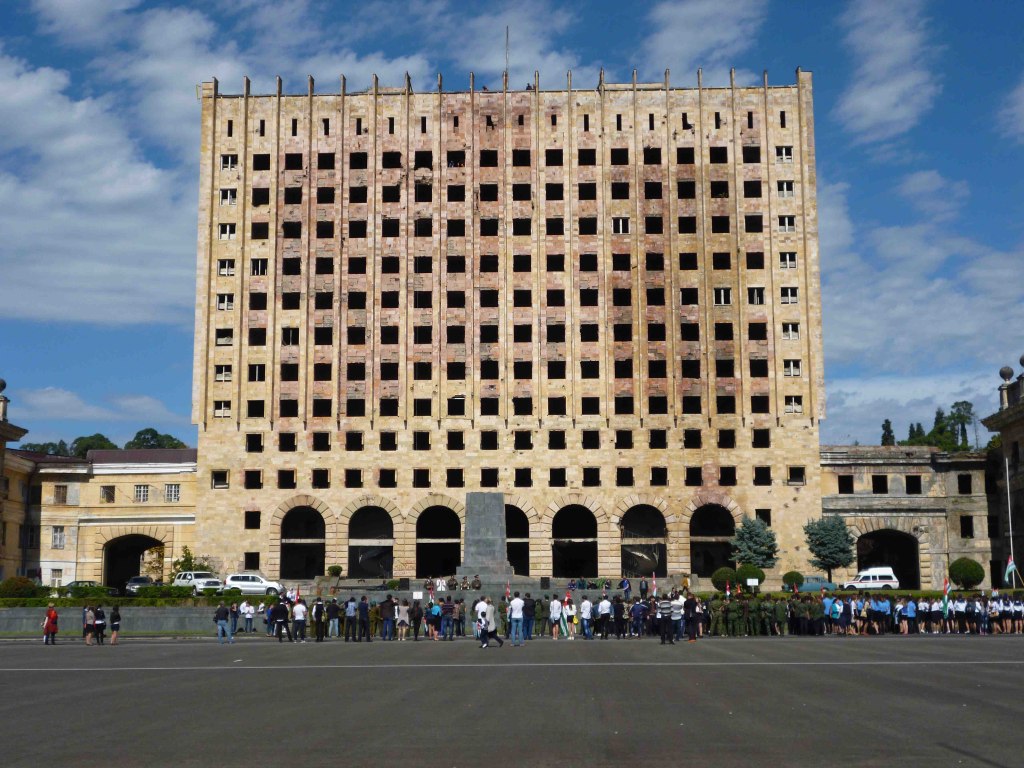 Events already held have included: visits of government-representatives and veterans to schools; laying of flowers on war-memorials; and the presentation of a new film /AkWymzhWywaa/ 'Men in Cherkesskas', broadcast from the Philharmonic Hall live on the main Abkhaz TV-channel on 25 September, which was preceded by the opening of an exhibition of related photographs. A collection of new songs /20 SHykWsa RyshtaxJ/ 'After 20 Years' will be presented outside the National Theatre at 7pm on 27 September.

The main events, to take place on the evening of 29 September and throughout the day on 30 September, are set out in the accompanying photographs. Official guests, including several visitors from Turkey, which provided significant volunteers in the war from the large Abkhazian (and Circassian) diaspora resident there, will also receive a lavishly produced album of photographs from and/or relating to the war /Aiaaira/ 'Victory', produced at the behest of the Government of Abkhazia under the direction of the Prime Minister, Leonid Lakerbaya.

Each year, in the run-up to the 14 August and then 30 September, the main TV-channel devotes much of its time to film-footage from or about the war, and this output has been especially prominent for obvious reasons this year. Perhaps now that two decades of independence have been secured, putting beyond any doubt that there can ever be a return to the 'status quo ante' it is time to lay to rest the past by leaving such old material in the archives. Minds and efforts could then be concentrated not only across the media but also the whole of society (including the political opposition with its seeming obsession on the potentially divisive, and thus dangerous, issue of how many local Mingrelians are/should be eligible for Abkhazian citizenship and passports) exclusively on how to build and secure against any and all malign forces a bright and prosperous future for ALL the residents of multi-ethnic Abkhazia.

On the occasion of the 20th anniversary of the end of what has become known as Abkhazia's Patriotic War, Abkhaz World offers a selection of thoughts.

For twenty years now the West has shirked its responsibility in Abkhazia, by Oliver Urs Lenz

The Beginnings of a Black Sea Security Community? By Carol Weaver