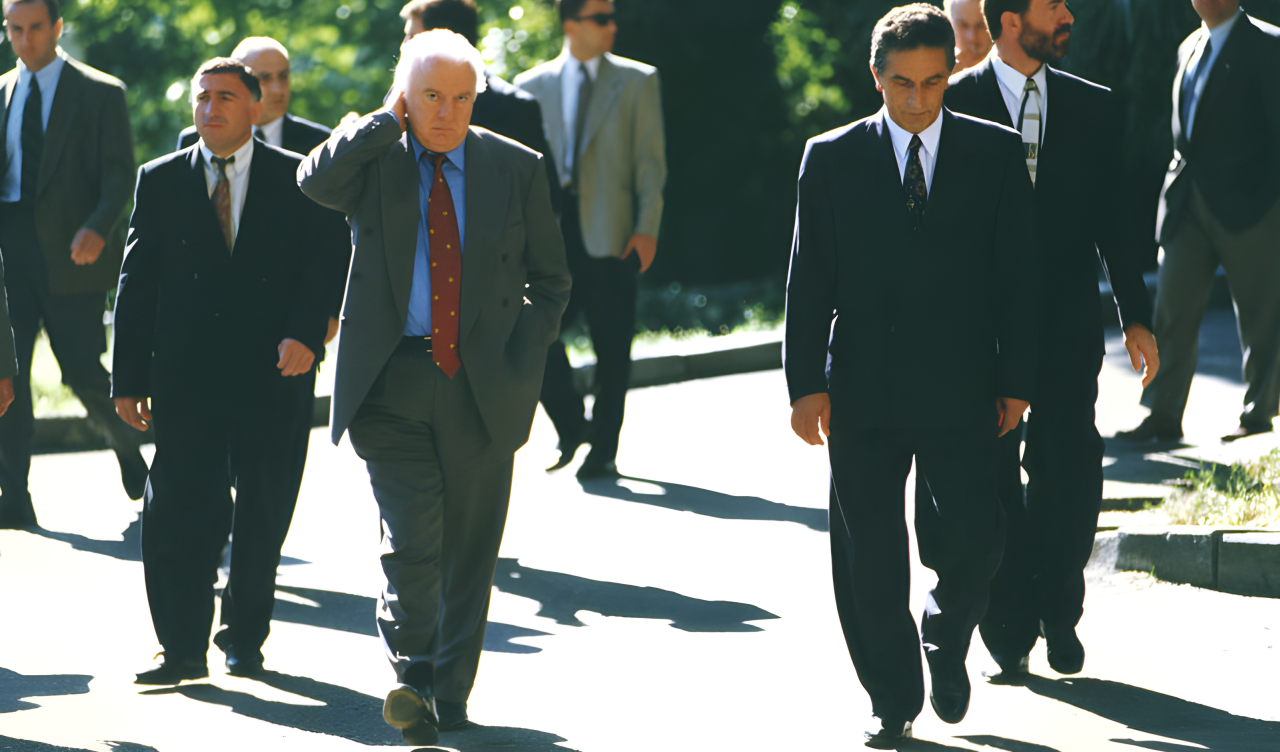 Vitaly Sharia (Ekho Kavkaza) -- The 14th of August is a telling date in Abkhazia, since it was on this day that the Georgian-Abkhazian war began thirty years ago, dividing the life of all the inhabitants of the republic and its history as a whole into “before” and “after”. Echo of the Caucasus has invariably addressed the anniversaries of the start of this war, but it transpires that something else lain in the shadow of this most important historical event: it was on 14 August 1997, that is, exactly five years after the start of the war, that the first president of Abkhazia, Vladislav Ardzinba, paid his first and last visit to Tbilisi as the Abkhazian leader.

And now, for the first time, we have decided to turn our attention to this visit, especially since this is also a round date – a quarter of a century has passed. And then the current chairman of the Union of Journalists of Abkhazia Ruslan Khashig , who accompanied the Abkhazian delegation as a TV correspondent, came to our aid  and who volunteered to share his memories with the EC readership. Here is what Ruslan Khashig said:

“Here it is necessary recall that, since the end of May, for almost a month, very active, close negotiations between Georgia and Abkhazia had been held in Moscow through the mediation of the Russian Foreign Ministry. Foreign Minister Yevgenij Primakov personally got involved. And the parties tried to agree on a major political document on the settlement of Georgian-Abkhazian relations. As far as I remember, first the ministers of foreign affairs from the Georgian and Abkhazian sides, then Vladislav Ardzinba joined in and left for Moscow. Somewhere in mid-June, a document was agreed upon, the parties had already discussed the specific date and place of its signing. And then, as always, the Georgian side refused to sign the already agreed document and began to edit it.”

But during Primakov's vacation in Sochi, he met with Ardzinba there. Primakov still wanted to achieve some kind of Georgian-Abkhazian agreement, considering this a matter both of his personal prestige and that of Russia. Vladislav, says Khashig, was worried about the difficult socio-economic situation of Abkhazia, which could not be improved without easing its blockade by the CIS countries, as the condition for which Moscow put forward progress in the Georgian-Abkhazian negotiations. Khasig added:

“Not all young people now know about this - that Vladislav Ardzinba worked (in Soviet times in Moscow) under the leadership of Evgenij Maksimovich Primakov at the Institute of Oriental Studies. This had significance. The proposal for Ardzinba's trip to Tbilisi came from Primakov – it was his initiative. And I must say that there was a meeting of the Security Council of Abkhazia at which the issue of this trip was discussed. And I remember that there were opponents of the trip. Everyone then remembered the story connected with Nestor Lakoba. But Ardzinba managed to persuade them…”

By the way, as another journalist reminded me the other day, at that time many dissatisfied people in Abkhazia did not like the date of the visit, which coincided with the mournful date of the start of the war. But here everyone can interpret this coincidence in their own way, accept or not accept it, depending on their mindset ... Ruslan noted that the members of the Abkhazian delegation did not go to board Primakov's government-plane in Adler, and so he made a landing to pick them up at the military airfield in Bambora. It was on this route that the Minister of Foreign Affairs of Russia insisted out of respect for the Abkhazian side. Khashig continued that, apart from Ardzinba:

“The Abkhazian delegation included his personal representative at the Georgian-Abkhazian negotiations Anri Mikhailovich Dzhergenia, Foreign Minister Sergej Mironovich Shamba, me and cameraman Mizan Lomia, and security-guards Kochubej Chkok, Gember Ardzinba and Dzhoni Khutaba. When we arrived in Tbilisi, the operator and I were the first to get off the plane, which was noticed by Georgian journalists. It must be said that a very narrow circle in Tbilisi knew about Primakov's joint-visit with the Abkhazian delegation. Later, when we ended up in the same minibus with Georgian journalists who saw Ardzinba, they constantly asked us on the way: ‘Is this Ardzinba or not?’ How – they asked – did we end up on the plane with Primakov? How did it happen? How could Ardzinba fly in at all? Is it really true?...

“Well, to continue – there is this widely known information about the negotiations at Shevardnadze's residence in Tbilisi. The three of them had a meeting, then Primakov left the residence altogether, saying: ‘My task is done; now the Georgian and Abkhazian sides will negotiate on their own.’ And these negotiations really went on in different formats and for a very long time. And at that time I had a chance to talk with the deputies of the Supreme-Council-of Abkhazia-in-Exile Eteri Astemirova and Gia Gvazava, who turned out to be in the residence. They were simply shocked by the fact that Vladislav Ardzinba had arrived in Tbilisi. They were indignant: how could this be allowed to happen? Shevardnadze was highly criticised. A long interview with Vladislav Ardzinba Ardzinba had been broadcast on the first Georgian channel on the eve of our arrival.

“Astemirova and Gvazava were also outraged by this interview. I remember their words: ‘So this interview wasn’t enough [for him that] he still had to come here!’... Returning to the negotiations, I’ll say that in Georgia, especially among the Georgian journalists with whom we talked, they expected some kind of miracle from this visit ­– what [else was to be expeted] if Ardzinba has flown in?... But this miracle did not happen and could not happen, because, let me remind you, the Georgians did not sign the previously agreed document. The parties continued negotiations on the morning of the 15th.

“We stayed there at the residence. In the morning they signed a statement on the non-use of force – Eduard Shevardnadze and Vladislav Ardzinba. It is difficult to say that this later had any very serious impact on the political settlement, on the course of negotiations, because, as you remember, all this was brought to zero after the May 1998 events in the Gal Region, which returned us to a state of  armed conflict.”

I could not help but ask Ruslan Khashig about his attitude to the version that has been circulating among the people in Abkhazia for many years. If we return to the meeting of the Security Council on the eve of the visit, then the first president was reminded of the fateful trip to Tbilisi in December 1936 by the then Abkhazian leader Nestor Lakoba, who, they are convinced in Abkhazia, was treacherously poisoned at dinner at the house of Lavrenti Beria. And when, two or three years after his visit to Tbilisi, Vladislav Ardzinba fell seriously ill, he began to have problems with speech, this analogy began to be drawn much more actively – with claims that Ardzinba had been got at in Tbilisi with the help of some kind of radiation and so on. Ruslan considers this version untenable. It's just that the health of Vladislav Ardzinba, in his opinion, was affected by the enormous psychological stress that he had to endure during and after the war.