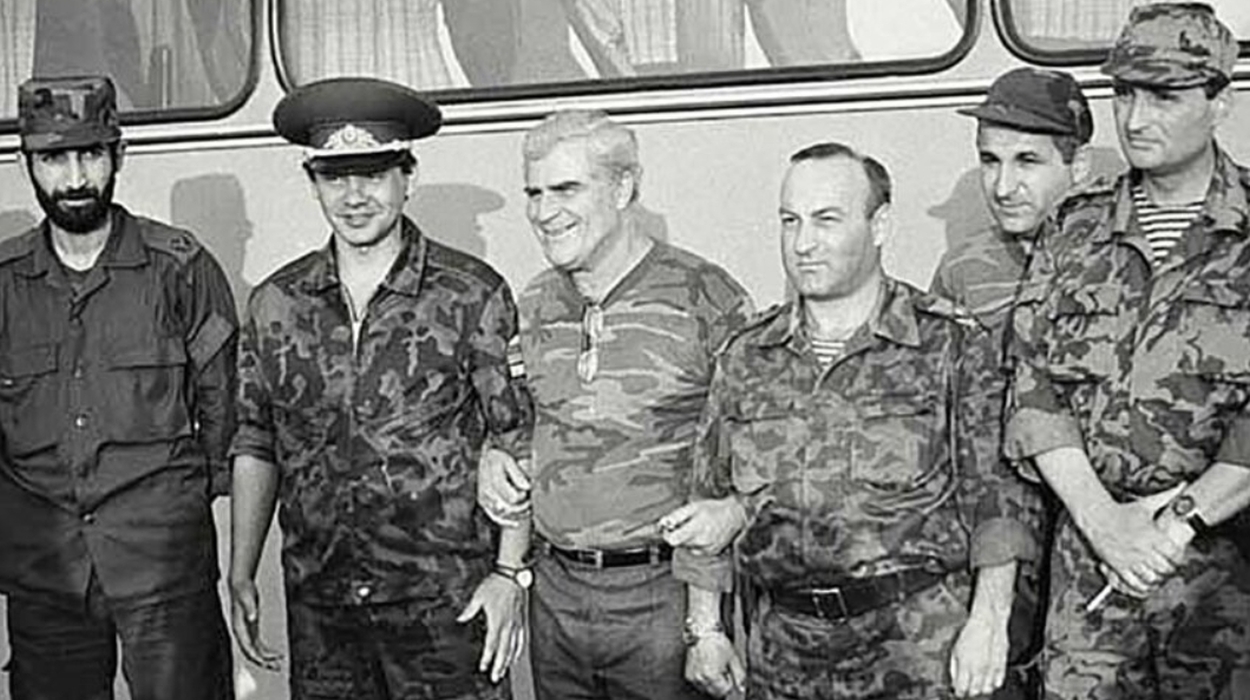 It seems that they never run out of arms in the Georgian-Abkhaz war. Yet the transfer of Russian arms to Georgia , for example , was halted by a decision of the parliament of the Russian Federation back in October of last year. Where are they getting their weapons?

- In spite of the decision of the parliament of Russia, the transfer of arms to Georgia ended on 4 April 1993 in keeping with the agreements of the Tashkent meeting on 15 May 1992. As of today the following have been transferred to Georgia: from the 10th Motorized Infantry Division - 108 tanks, 111 BMP's (infantry combat vehicles], 19 BTR -80 (armored personnel car riers, 48 MTOB (small light armored transporter), eight BM-21 (Grad ) installations, 90 guns from various sys tems, 20 mortars, 18 PTUR combat vehicles, more than 200 “Strela - 2” PZRK (portable antiaircraft missile system), 13 ZSU23-4 ("Shilka"), 18 ZU23-2, and 12,000 automatic rifles; a division of the Ministry of Internal Affairs turned over eight tanks, six infantry combat vehicles, 18 armored personnel carriers, 12 BTRM, and 2,000 rifles. Russia also gave them an air defense system, including surface -to -air missile complexes of the Krug and Kub types. Georgia bought 800 units of automatic weapons from Romania. 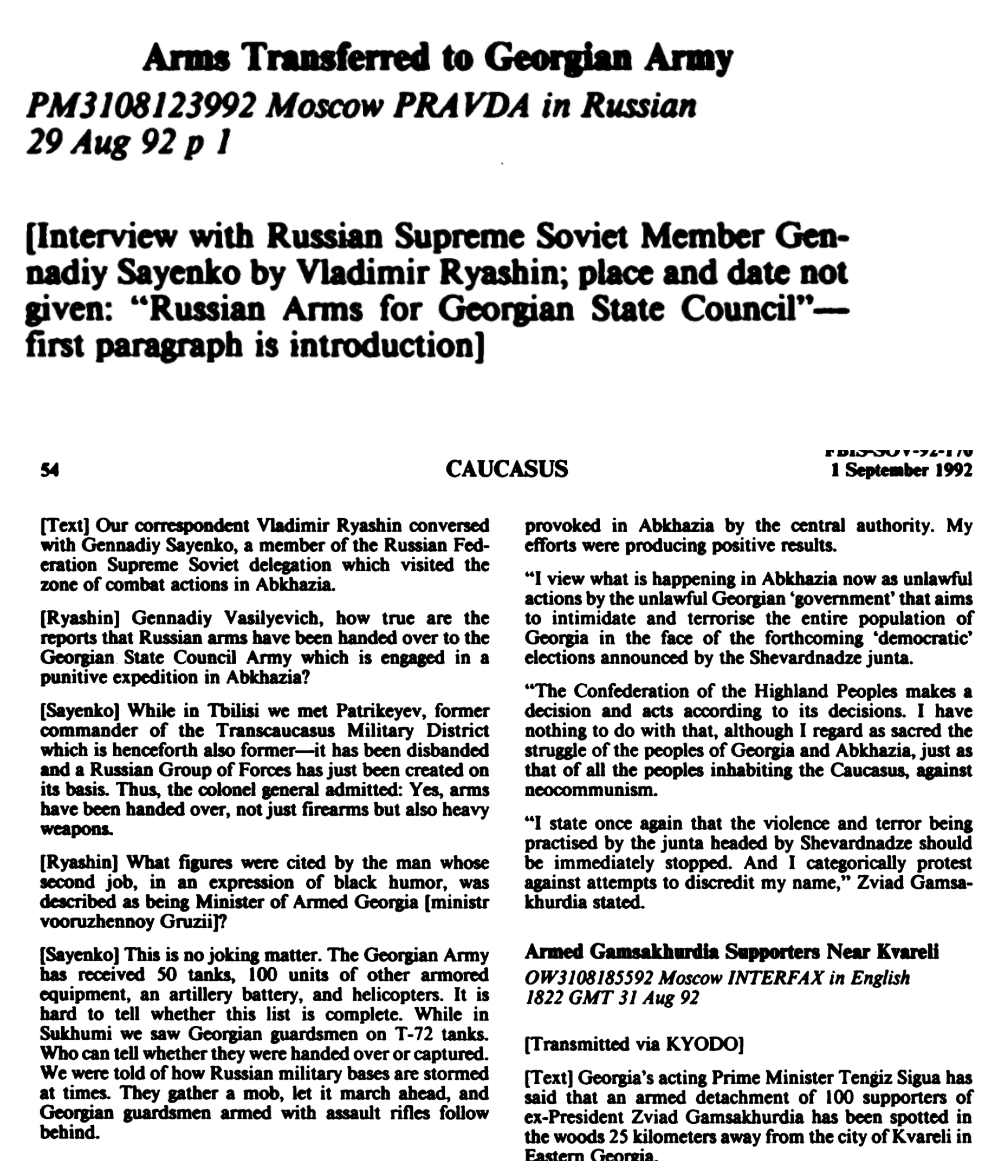 Vladislav Ardzinba: "Russia helps us a lot. Because Russia gives weapons to the Georgians and we take them away from the Georgians, they become ours." See video: https://twitter.com/AbkhazWorld/status/1547492484737122308?s=20&t=_3DRrXiUaGyVEGAAvS5OyQ 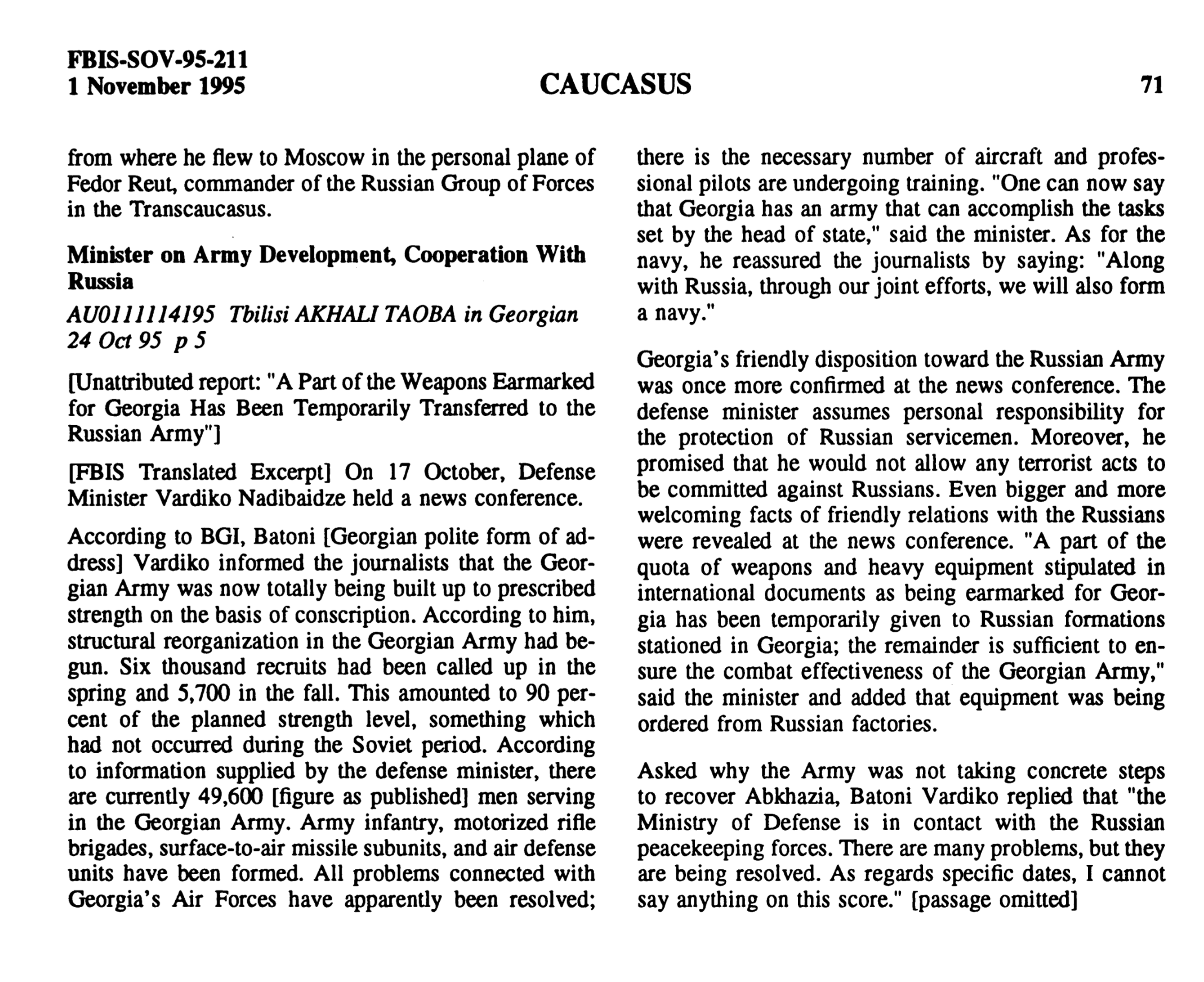 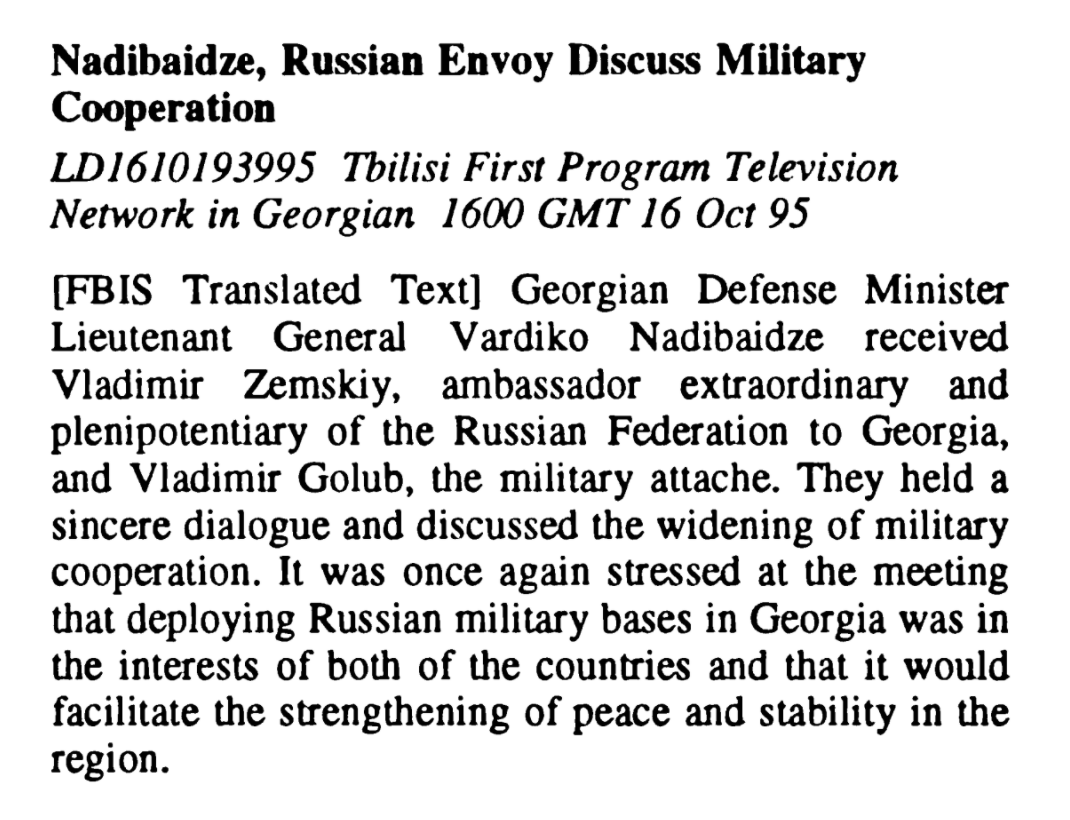 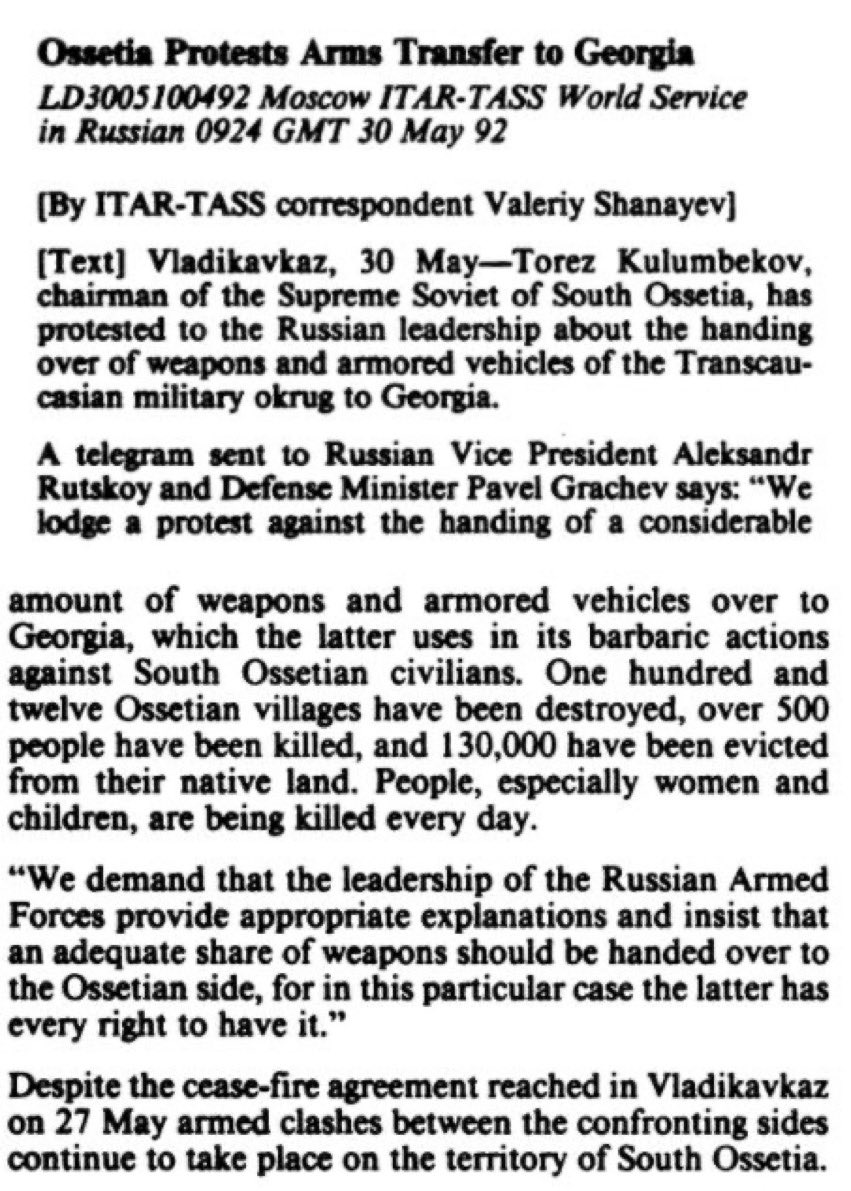 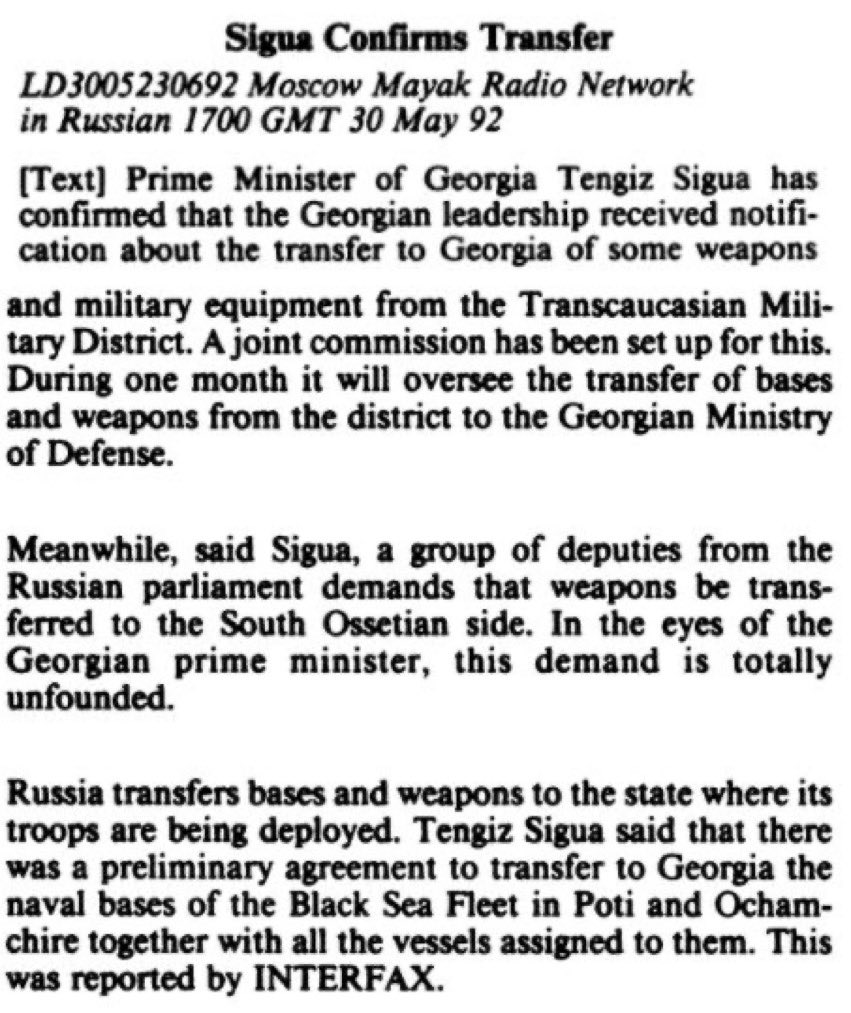