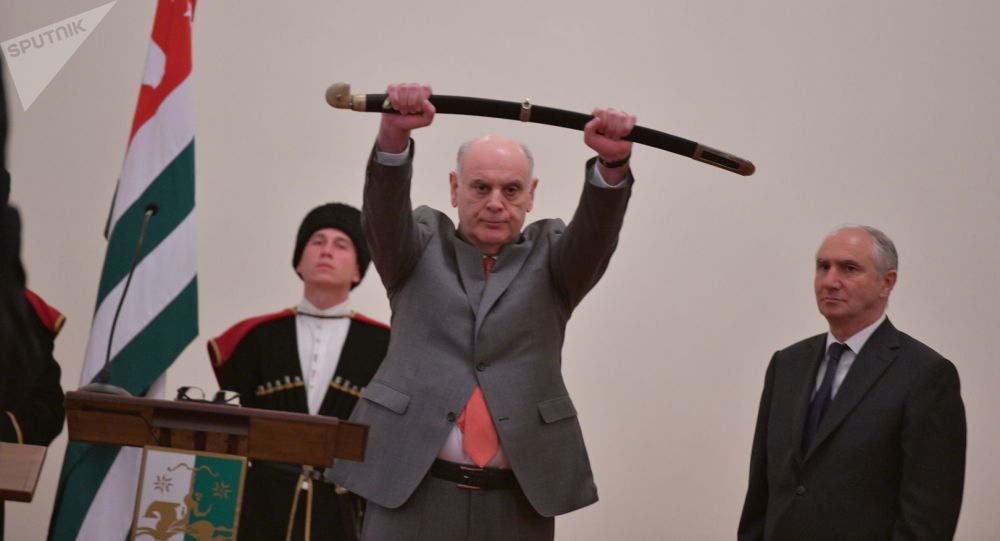 SUKHUM -- The inauguration of elected head of state Aslan Bzhania is taking place in the conference hall of the presidential palace. Bzhania begins to exercise his powers from the moment he swears to uphold the Constitution.

He noted that the course of the election campaign and its completion give hope that a new political culture is emerging in Abkhazia. Bzhania said he counts on working with other presidential candidates "in terms of countering political extremism and other threats facing the state."In his words, the main goal of the state is the transformation and strengthening of key state institutions, "within the framework of which the preservation and sustainable development of the people of Abkhazia is possible."

“The best sons and daughters of Abkhazia gave their lives for this goal. Vladislav Ardzinba and Sergey Bagapsh channeled all their activity into this mission. I hope that forthcoming work to achieve this goal will contribute to social harmony,” he said.

Bzhania singled out as one of his primary objectives "restoring public confidence in the authorities." According to the new head of state, this can be achieved only by working honestly and openly.

“Everyone who will be invited to work in the executive branch must understand that the post of minister, head of government, is not a privilege, but a high responsibility to the citizens of the country. Above all, they must demonstrate to society unconditional adherence to the principles of legality and of the equality of every person before the law," Bzhania emphasised.

The President said he is aware that he is taking control of the state at a difficult juncture, and for that reason it is necessary to start work without wasting time.

“If a leading official proves unable to cope with his assigned task or tries to use his official position for purposes contrary to the interests of citizens, we shall say goodbye to such an employee without regret, regardless of any previous merits. And if there is an element of crime in his actions and evidence of guilt, then the principle of the inevitability of punishment must be brought to bear in full measure,” Bzhania said.

The head of state emphasised that he is not promising an instant improvement in peoples’ lives. He recalled that he spoke about this during the election campaign.

“Tomorrow there will not be general prosperity, tomorrow there will be hard and painstaking work. At this stage, maximum efforts must be made to localise the consequences of numerous threats, including such as organized crime and corruption, which is an intrinsic part of it. Without establishing law and order and ensuring the safety of citizens, it is impossible to create conditions for the development of the economy and attracting investment,” he explained.

Bzhania affirmed that the trust placed in his team during the election will be used "to implement plans to increase the efficiency of state bodies."

He emphasised that the strengthening and development of comprehensive cooperation with its main ally and strategic partner, Russia, has been and remains a priority area of Abkhaz foreign policy.

"In accordance with the agreements, we will conduct more intensive work with fraternal Russia on all aspects of bilateral and mutually beneficial cooperation between equals," he said.

In his inaugural speech, Bzhania also touched upon the issue of the coronavirus infection which the whole world has been faced with. He noted that the pandemic has exposed serious problems within the health service.

“Even strong and rich countries were not ready to confront such a large-scale problem. I thank the medical workers of Abkhazia, employees of other agencies, and businessmen for having managed in these conditions to mobilise available resources effectively and provide timely assistance to the population,” stressed Bzhania. He added that the coordinated actions of the branches of power made it possible to localise the extent of the problem at the initial stage. .

“Dear friends, it is impossible in one address to highlight all aspects of the life of the state. We will make every effort to ensure that the activities of the authorities are efficient and transparent,” Bzhania added.

The inauguration of the elected head of state Aslan Bzhania is taking place in the conference hall of the presidential palace. Bzhania begins to exercise his powers from the moment he swears to uphold the Constitution.