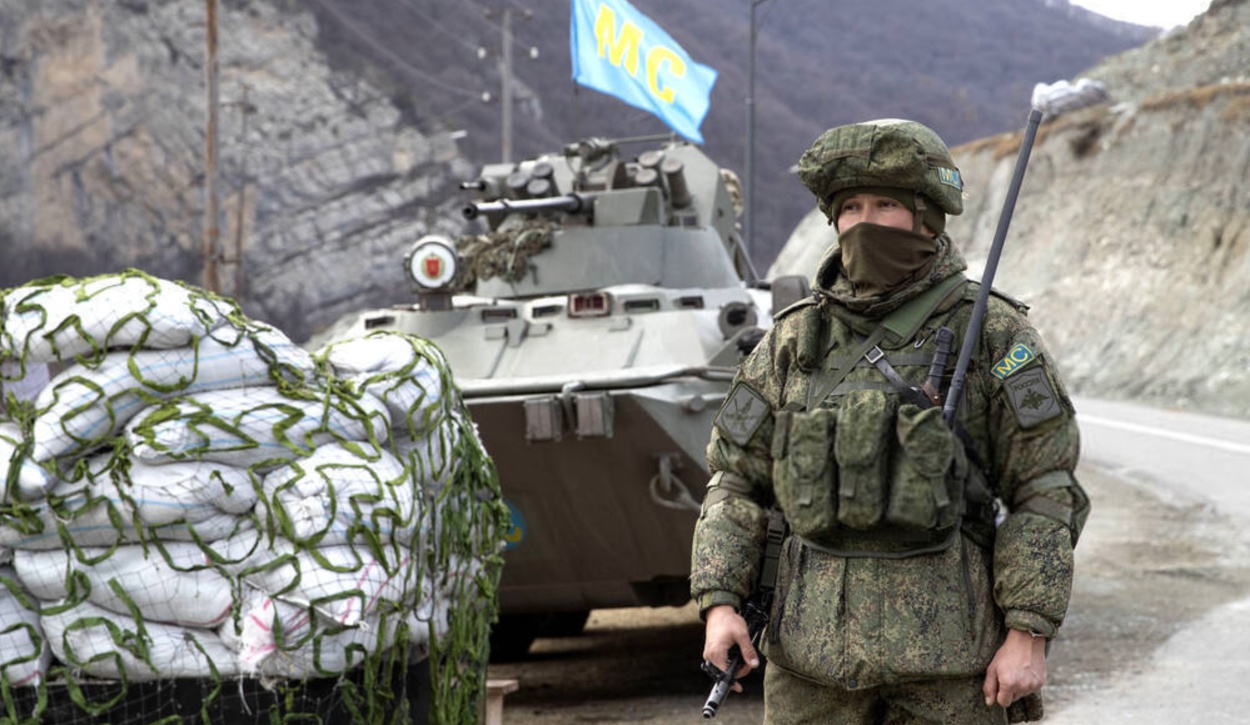 The Swiss-Lebanese historian and journalist Vicken Cheterian, who wrote “War and Peace in the Caucasus: Russia’s Troubled Frontier” back in 2009 -  a must-have for those who want to understand the political dynamics of the Caucasus region, has answered AbkhazWorld’s questions.

AW: Recently you lectured at the University of Geneva, where you taught a course on "Caucasus geopolitics" about the 2008 Georgia-Russia war. If you were to compare the two wars, namely Georgia 2008 (over South Ossetia) and Karabakh 2020, what would you consider the key-differences and/or similarities to be?

Vicken Cheterian: The 2008 Georgia-Russia war was a major event in international relations, as it marks not only the end of the Russian military retreat that began in 1989 but also the start of a new Russian policy that was articulated around projection of power largely based on the military and expansionism, cemented through anti-Westernism. The fact that this turning point happened in the South Caucasus, a sensitive region for Russia, is important to note. The Karabakh War in 2020 can be seen as a continuation of this trend: Moscow managed to expand its sphere of influence in the South Caucasus by deploying troops into Karabakh, and it did so by excluding major Western actors such as the US and France, the other co-presidents of OSCE’s Minsk Group, which was mandated by the UN to seek a political solution to the conflict. Moscow does not seem to mind the fact that Turkey was instrumental in facilitating Azerbaijan’s military victory, but it has nevertheless managed to limit Turkish political gains and military expansion towards Azerbaijan.

There are numerous similarities and differences between the two wars. One is that both wars were started by political leadership - Mikail Saakashvili in the first case, Ilham Aliyev in the second - under the veil of a global event that distracted world attention. In 2008, war coincided with the opening of the Beijing Olympics. In 2020 it was the global pandemic and US presidential elections. In the future, politicians and journalists should be more attentive at such moments of global distractions, as they might be opportune moments for the triggering of military action.

Another similarity is the fact that the major foreign ally of Georgia (the USA) and that of Armenia (Russia) did not intervene to stop the military attacks on their protégés, although both played a role in limiting the scope of military operations. This is important to note for small or ‘de facto’ states, as it reveals that major powers would make cost-benefit calculations before defending their allies.

One could also look at those wars from an internal political angle: both Georgia and Armenia were post-revolution regimes, where the focus was supposedly internal reforms and the fight against corruption. One can notice that the 2008 war put an end to radical transformation under Saakashvili and might speculate that the Karabakh war will have a similar effect on Armenia.

AW: Based on your personal observations during your time in Abkhazia in the 1990s, what, if any, advice would you have for Abkhazians to achieve an outcome beneficial for and acceptable to all parties? And similarly, what would be your advice, if sought, for Georgians to achieve the same outcome?

VC: The wars in the Caucasus in the late 1980s/early 90s - Abkhazia, Karabakh, South Ossetia, Chechnya – were of a different nature from those in 2008 and 2020: they were the result of the collapse of the Soviet Union, the sudden emergence of new forces that tried to replace the old USSR with new political systems. In 2008 and 2020, they were the result of political decisions taken by heads of states to resolve conflicts inherited from the past, the instrument for which were the new armies of the new (nation-)states.

My reading of the first wave of conflicts is that it took place between three types of actors, being: the Soviet central authorities; the union republics now in the process of becoming independent states; the former autonomies that were attempting to preserve their status, or to seek sovereignty. Broadly speaking, the Georgian national movement was busy struggling against Moscow, it did not take into consideration how its policies influenced Abkhazia or South Ossetia. They simply did not consider that Abkhazia had legitimacy to voice its concerns, dismissing them as merely “agents of Moscow”. But compromise was possible, for example Zviad Gamsakhuria - while engaged in violent conflict in South Ossetia, attempted to pacify the tense situation in Abkhazia by a compromise formula of power sharing agreement. This agreement was negated by Tbilisi in August 1992 when it extended a military expedition into western Georgia to continue into Abkhazia and ignite a major military conflict. The basic problem here is that there was a “triangular struggle” emerging, but Tbilisi was not ready to consider Abkhazian positions and demands, although it would have cost much less to do that and to give satisfaction to minorities before the situation developed into armed conflict.

The Abkhaz side had very few options, once the war erupted in 1992; from their perspective this was an existential struggle, a question of their survival. I think the Georgian side did not understand this in the 1990s, and am not sure how many actually understand it today. Georgia’s political class had several political options to integrate the Abkhaz and the Ossetes in their emerging political system. By using harsh, military methods they chose the worst possible one, as this provided an opportunity for Russia to intervene and gain influence to the south of the Caucasus.

But now in the aftermath of the Karabakh war, there is a new dynamic situation. One still has to see how far-reaching it is, but the Abkhaz and the Georgian actors have to take several factors into consideration: increasing Russian influence, Turkish force-projection, and absence of Western influence. Most of all, both parties should note that any future conflict will likely provide a further invitation for intervention to the two major actors - Russia and Turkey. Plus, in the coming years we will see economic downturn, because of the pandemic and collapse of oil-prices, triggering the rise of new tensions and popular dissatisfaction. Therefore, it is necessary to have qualified leaderships able to navigate in new, uncharted waters.

VC: The war might be over but peace is not yet attained. Sides are still a long way from find mutual understanding, which should be based on listening to the concerns of the other side. Conflict is natural and even healthy, as societies are evolving rapidly and tensions arise that need adjustments. Those changes should be done through political institutions, negotiations and reaching compromises, and not by threats of wars and mass-violence.

I think all political entities in the Caucasus are small actors; all the states and ‘de facto’ states put together do not even amount to 20 million. They are encircled by three major powers - Russia, Turkey and Iran - and are located in an area of political instability stretching from the Middle East to Afghanistan. For the well-being of their peoples they have an interest in overcoming past conflicts and finding ways for cooperation and development. This could only happen when the relatively powerful sides understand and respect the fears of smaller peoples, and adopt policies to ensure their safety and survival.

AW: As my final question, what would be your evaluation of the stark and almost messianic warnings of Prof Jriar Libaridian, a distinguished Armenian historian and a senior adviser to the then Armenian President Petrosyan from 1991 to 1997, to both the Armenian political establishment and the Armenian people in general back in September this year just before the war had started, foretelling a looming military and political catastrophe awaiting Armenia in Nagorno-Karabagh, except for nothing short of a very swift and complete overhaul of the Armenian thinking and strategy on the question of Karabagh?

VC: I shared similar concerns about the direction Yerevan authorities were taking after the 2018 “Velvet Revolution”. My concerns were based on the following observations: Post-2018 leadership in Armenia was engaged in internal political and economic reforms, and I did not see the small country having resources to address yet another huge question, that of the regulation of the Karabakh conflict. So, to my mind, Pashinyan’s strategy should have been to seek neutrality on Yerevan-Baku relations. Instead, he stirred the ethno-territorial conflict. While initially, his discourse was that of “democracy” and “peace between the two peoples” very quickly it became incomprehensible, mixing peace messages with hard-line nationalism.

I was alarmed to see this already in 2019, and wrote about it in Agos (Istanbul based weekly):

“Nikol Pashinyan after coming to power promised to break the deadlock by democratizing the negotiations process. He said that there was no solution without the participation of both Armenian and Azerbaijani public opinion. But soon Pashinyan’s declarations became increasingly nationalistic, even surpassing the positions of Serzh Sargsyan, talking against any “territorial concessions”, and for the “unification between Karabakh and Armenia.” Pashinyan’s position on Karabakh is not revolutionary, but confused and confusing: as if he makes one type of announcement when he talks to the international community, and a different one when he talks to his domestic constituency or when he goes to Karabakh itself."

My explanation to the contradictions of Pashinyan’s policies is that he made Karabakh part of the internal power struggle. He was more concerned in bringing his people to power in Stepanakert, rather than paying attention to keep the Karabakh question stable - not to mention avoiding a second war and advance in conflict resolution. This problem - that of making the Karabakh issue part of the internal power struggle - is not new in Yerevan, and goes back to the times of the first President Levon Ter-Petrossian.

Another explanation to the hardening of positions under Pashinyan is that he was trying to answer in kind to the hard-line positions of Baku leadership. Since coming to power of Ilham Aliyev, Baku developed not only militaristic discourse and threats, but also maximalist political positions whereby demanding the return of the occupied Azerbaijani provinces but also rejecting to accept Karabakh’s right to self-determination. This shift in Baku led to a hardening of positions in Yerevan as well: instead of considering the occupied territories as “bargaining chips” to obtain Karabakh’s sovereignty, the Armenian side started to consider them as a security zone necessary against Azerbaijani military threats.

The result of this down-turn spiral was that long years of relative stability were wasted, and instead of taking steps towards confidence-building and dialogue, they spent huge resources to get ready for the Second Karabakh War.