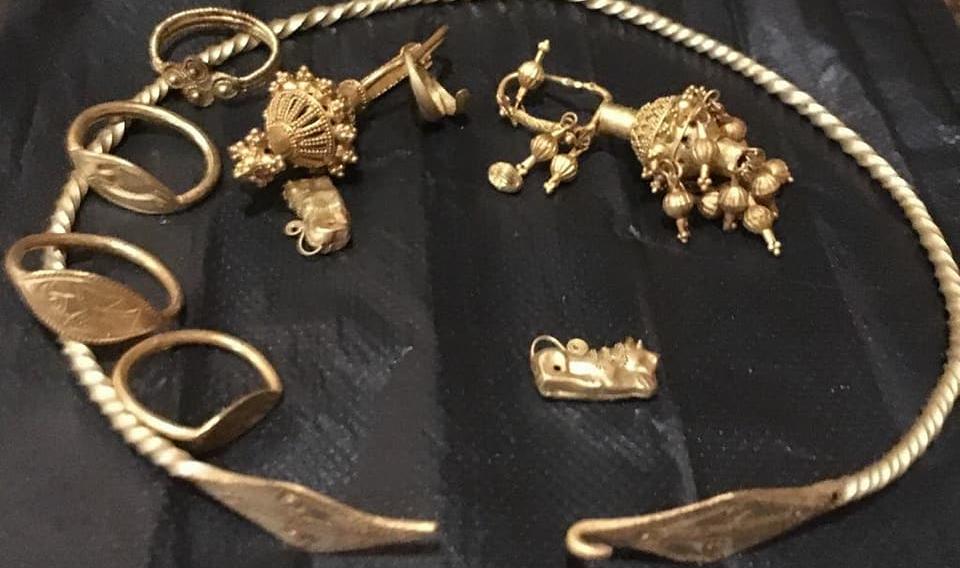 A human skeleton, a bronze helmet, tips, spears and ornaments were found by local resident Rustam Chkhebelia in the village of Achandara.

Some items found in an ancient burial site by a resident of Achandara have no analogues in Abkhazia, an expert says.

SUKHUM -- The burial site found with jewels in Achandara is one of the richest burials on the entire east coast of the Black Sea, Sputnik was told by the Director of the Abkhazian State Museum Arkadi Dzhopua, commenting on the find by Rustam Chkhebelia, a resident of the village.

"In all, nine gold ornaments, a bronze helmet, lugs, spears, a silver bowl with oriental-style drawings, two daggers of an akinak-type of dagger (a short iron sword of the Scythians - ed.), as well as containers for the jewellery," said Arkadi Dzhopua, Director of the State Museum of Abkhazia.

The discovered jewels are dated to an earlier period than those found by Abkhazian archaeologists during excavations in the early 2000s in the village of Achandara.

"The ones that we found in the same place in the early 2000s date back to about IV-V centuries AD, and those found a mere 1.5 metres from the place of our excavations by the local resident Rustam Chkhebelia belong to earlier periods, and more precisely to the V-IV centuries BC. Certainly they are more ancient, almost by a thousand years," Dzhopua added.

According to the archaeologist, the gold jewellery is of great value.

"For example, of the gold works there is a pendant for the neck. We had already found bronze examples. There are also different kinds of rings, which can be seen in the picture." We have bronze analogues, and they are no less valuable. Presumably, these decorations were made by local craftsmen," Arkadi Dzhopua noted.

As for the other ornaments, the gold earrings, the scientist refused to confirm anything. 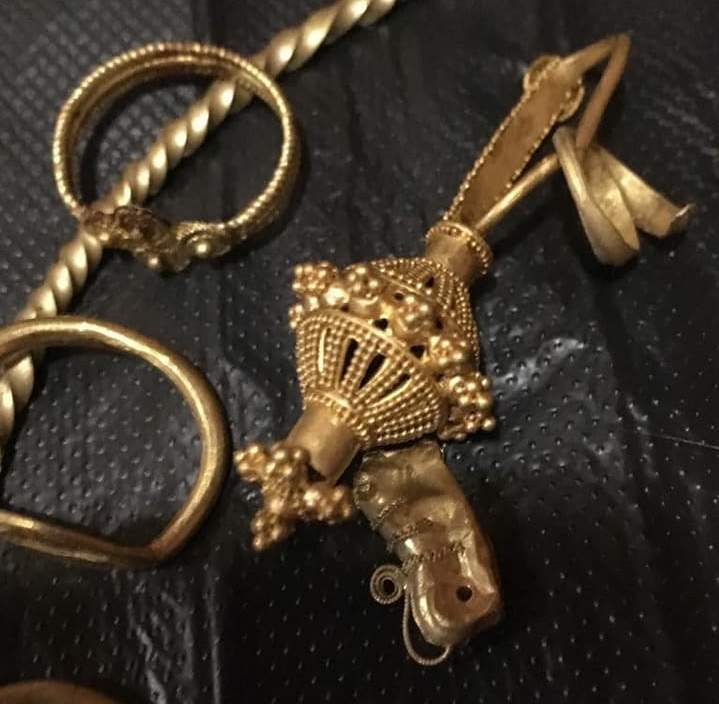 "We have not seen anything like these earrings before. Most likely, this is not the work of the hands of our local masters. We need to study them in more detail. For the time-being it's hard for me to say anything about them." But take the bronze helmet, for example; I assume that it is not of local production, but rather imported," he commented.

As the Director of the Abkhazian State Museum said, the bronze helmet, spear-heads and daggers testify to the fact that the resident of Achandara most likely stumbled upon a man's burial site.

"By virtue of the helmet, armour and daggers it’s possible to assert that a soldier was buried here. However, these female ornaments call into question whether this is for certain a male burial, singly or paired. All this we will find out during the detailed study of the material found. Today the jewellery resides in the National Bank; later the items will be transferred to the State Museum, and then we shall also be determining the value of the find; also we shall organise an expedition in parallel, travel to this spot and start digging," Dzhopua explained.

In addition to the jewellery, archaeologists will also study the human skeleton which was found in the burial site.

"We, in the manner appropriate, shall excavate the skeleton and the skull. I think they will tell us a lot. In addition to answering the question to whom the burial actually belongs, the remains can also tell us about the burial rite, but this is more the sphere of anthropologists," said the Director of the State Museum.

A human skeleton, a bronze helmet, tips, spears and ornaments were found by local resident Rustam Chkhebelia in the village of Achandara, Gudauta district, on 31 January.