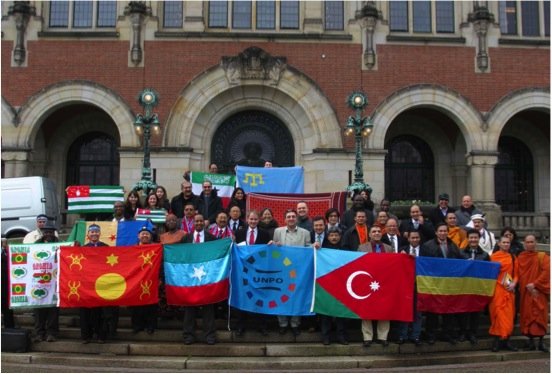 Below is a press release issued by the UNPO:

The Hague, 14 February 2011 – Two decades after its foundation in the seat of international law, the International Court of Justice, politicians, academics, and civil society met at the Peace Palace, The Hague, on 11 February 2011 to celebrate a seminal anniversary amid personal expressions of support from His Holiness the Dalai Lama,Seif Sharif Hamad, First Vice-President of Zanzibar, Sergei Bagapsh, President of the Republic of Abkhazia, and Harry van Bommel Dutch Member of Parliament from the Socialist Party.

In recognition of UNPO’s ongoing support of democratisation and conflict resolution in Zanzibar, the organisation “can be indeed a very powerful tool” First Vice-President Hamad noted. While millions remained unrepresented Harry van Bommel MP believed UNPO to be “the organization that fills the gap” between states and peoples – and one to whom he pledged his ongoing support.

UNPO President, Ngawang Choephel, conveyed H.H. the Dalai Lama’s praise for UNPO’s work in “fulfilling the aspirations of unrepresented peoples and nations” over what had been, in the words of Markó Béla, President of the Democratic Alliance of Hungarians in Romania “these fruitful 20 years of UNPO activity.” Meanwhile Nobel Peace Prize nominee and head of the Mejlis of the Crimean Tatar people, Mustafa Jemilev, wrote of UNPO’s outstanding contribution to “propagating humanism and paradigms of non-violent national struggle.”

Ledum Mitee, President of Movement for the Survival of the Ogoni People, highlighted the importance of corporate responsibility – a key area of concern for UNPO from the Americas to Asia. Only through “mutual cooperation and collaboration…can we move forward” in the struggle for peace, UNPO Vice-President and representative of the Republic of Abkhazia, Lana Agrba, believed. But Marco Pannella, President of the Senate of the Nonviolent Radical Party, noted that it had been shown repeatedly that despite “nation states’ sovereignty over human rights, [they] are not capable of respecting them.” Marino Busdachin, UNPO General Secretary evoked the idealistic beginnings of the UNPO and, in a world which was ever more pragmatic believed its “endurance is a cause for celebration…and of the utmost relevance”

It was in reflecting on its twenty years, that UNPO - with the International Campaign for Tibet - convened an international conference entitled ‘Tracing the Past to Look Forward’ to examine the current state of autonomy and self-determination after events in Kosova and Abkhazia, South Sudan and Somaliland. Contributions from Mohamud Daar, Somaliland Representative to Brussels, Dr. Charlotte Hille, University of Amsterdam, and Michael Van Walt Van Praag, first UNPO General Secretary, consequently discussed the cases of Somaliland, Abkhazia, and UNPO since they entered the limelight in 1991.