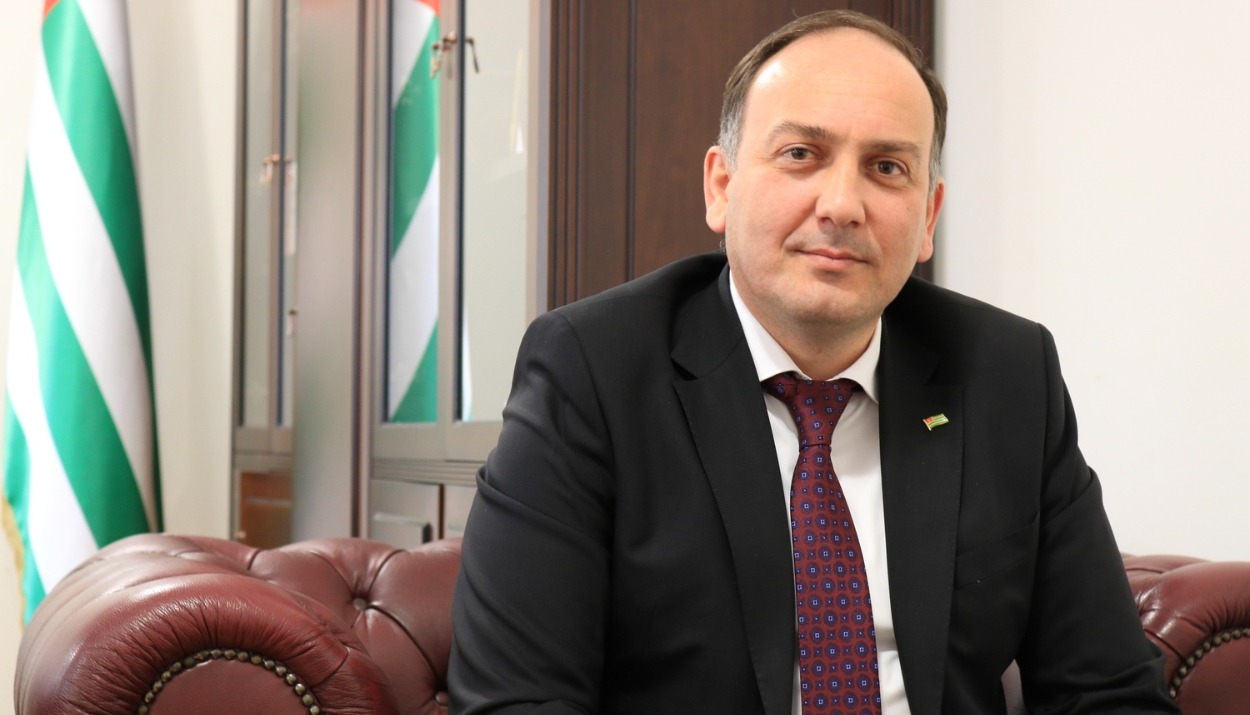 Ekho Kavkaza -- Daur Kove has been the head of the Ministry of Foreign Affairs of Abkhazia for four years now. But the topic of our conversation this time was not, as usual, the minister’s commentary on some event, statement or aspect of the republic’s foreign policy, but the life and fate of his grandfather, who managed to become famous in the thirties of the last century and shone over the Abkhazian (and not only the Abkhazian) scene. But at the age of twenty-eight he became enmeshed in the mangle of the Stalinist-Beria repressions.

Daur Kove does not belong to that happy majority of modern folk who in early childhood had a chance to sit on the lap of their grandfather. Muta Kove left two small children. And his grandson Daur was born on 15 March 1979, that is to say exactly seventy years after Muta’s birth and almost 42 years after his death.

Daur Kove tells of his grandfather:

- My father did talk about him, but my father too, you have to understand, had very little information, because my father himself was small when Muta was shot.

- What year was your father born?

- And was he the only child in the family?

- No, my father also had a sister, who was younger. Both my father and his sister have already passed away.

- Your grandfather was married to whom, and what was your grandmother's surname?

- And so she raised two small children?

- Where did they grow up?

- Here in Sukhum, where they had a house in the VIEM district...

To the biography of Muta Kove, who was born in the village of Qw’lanyrkhwa near Gudauta on 14 March 1909 in the family of the peasant Osman Kove, Abkhazian poet Georgi Gublia (1928-2019), also a native of this village, dedicated a documentary book. In it he describes such a picture. On the May Day holiday one year in the 1920s, the leader of Abkhazia, Nestor Lakoba, who was heading for Lykhny, stopped off at the Qw’lanyrkhwa village council-office on the way. People gathered there: some gave displays on horse-back, others were dancing. His gaze fell on the guy who was dancing among the singers around him. Nestor asked who it was. “He is the son of Osman Kove,” answered one of the village-elders, who was standing nearby. "Very talented guy; keep an eye on him and protect him."

At the age of 12, Muta Kove met future People's Artist of the USSR Sharakh Pachalia. Together they entered the Gudauta nine-year school and dreamed of becoming chauffeurs (obviously, it was a very prestigious profession then, almost like a pilot). But Sharakh's brother inspired them with the thought that the profession of an actor was very interesting. The school had a drama-club, which the friends soon began to attend. Of the fifteen members of the drama-club, the commission chose five, including Muta Kove and Sharakh Pachalia, for study and work at the Abkhazian Theatre of Drama. Kove was not confined to this; at the same time he began to participate in the State Song and Dance Ensemble under the direction of the famous choreographer Platon Pantsulaia, who appeared in the prose of [Fazil] Iskander under the name of Pata Pataraia. Soon Muta himself became a choreographer, staged numbers, and invented new dance-moves.“He danced like a bird, spreading the flaps of his Circassian coat like wings, flying up onto the stage in a whirlwind and, like a stretched bowstring, stood erect on his toes, freezing there for a second,” wrote expert on the Abkhazian theatre and writer, Alexei Argun.

SL: Well, I’ll tell you this: 52% of the repressed in Abkhazia were shot, something which was attested nowhere else. There is evidence that in 1937 and 1938 2,186 people were repressed.

Glory came to Muta Kove from the "Dance of the Abkhazian", which he performed at concerts of the Abkhazian Ethnographic Choir. The newspapers and magazines of Abkhazia and Georgia wrote a lot about the young dancer. In 1934, at the All-Caucasian Olympiad of Folk Art in Tbilisi, all four main prizes of the Olympiad were awarded to the Abkhazian Ethnographic Choir. After the brilliant performance in Tbilisi, a group of Abkhazian dancers led by Muta Kove was invited to take part in the Olympiad of the Peoples of the World in London. The dancers prepared for the trip, arrived in Moscow, but just before the flight to London, without any explanation of the reasons, they were told to return home.

After three years of training at Domogarov's drama-studio in Sukhum, Muta Kove becomes one of the leading actors of the Abkhazian professional theatre. At the same time, he began to test himself in drama. His first work was a play about the national hero Kjagua Inapha, whose role was played by the author himself. Then Muta writes a second play about the hero Khadzharat Kjakhba.

Despite Muta Kove’s great success in the theatrical life of Abkhazia, he then went to Tbilisi to receive a more advanced theatrical education. People's Artists of the USSR Akaki Khorava and Akaki Vasadze followed his creative growth with great attention. But then came the black year 1937...

We continue our conversation with Daur Kove:

- From what I read about your grandfather, it is not clear what he was charged with, what exactly he was accused of. Has this somehow become known over time?

- He was accused of being a member of the terrorist, counter-revolutionary Trotskyist organisation, led by the former chairman of the Central Executive Committee of Abkhazia, Lakoba. He was recruited by an active member of this group, Pantsulaia, and this organisation allegedly prepared terrorist-attacks against the leaders of the CPSU (b) and the government.

- And Pantsulaia was the famous leader of the dance ensemble?

- Was the fact that he was not allowed to enter London at the last moment, was it already connected with this case?

- No, it was before, and, as far as I know from the stories ... They were planned to be sent to London, but somehow at that time the leadership considered that it was not the business of the Abkhazians to fly to London and represent Georgia, and so they sent someone with Georgian surnames.

Muta's arrest took place at a celebratory meal. One of his friends in a student-dorm in Tbilisi had a birthday. Friends gathered to celebrate it, laid out the table, poured the wine. Muta was just beginning to make a toast when three NKVD officers entered the room to arrest him. Muta took them to his room, where they carried out a search and took away his things, including a Circassian coat, a hood, and all the manuscripts they could find. After the search, Muta was taken out of the hostel, and thereafter no-one else saw him at large.

For a long time he bore the label "enemy of the people" and only in 1958 was he rehabilitated. Later it became known that Kove was tried under Article "8.10 - treason". On 21 January, he was arrested, and on the same day a trial was held. On 5 December, he was shot.