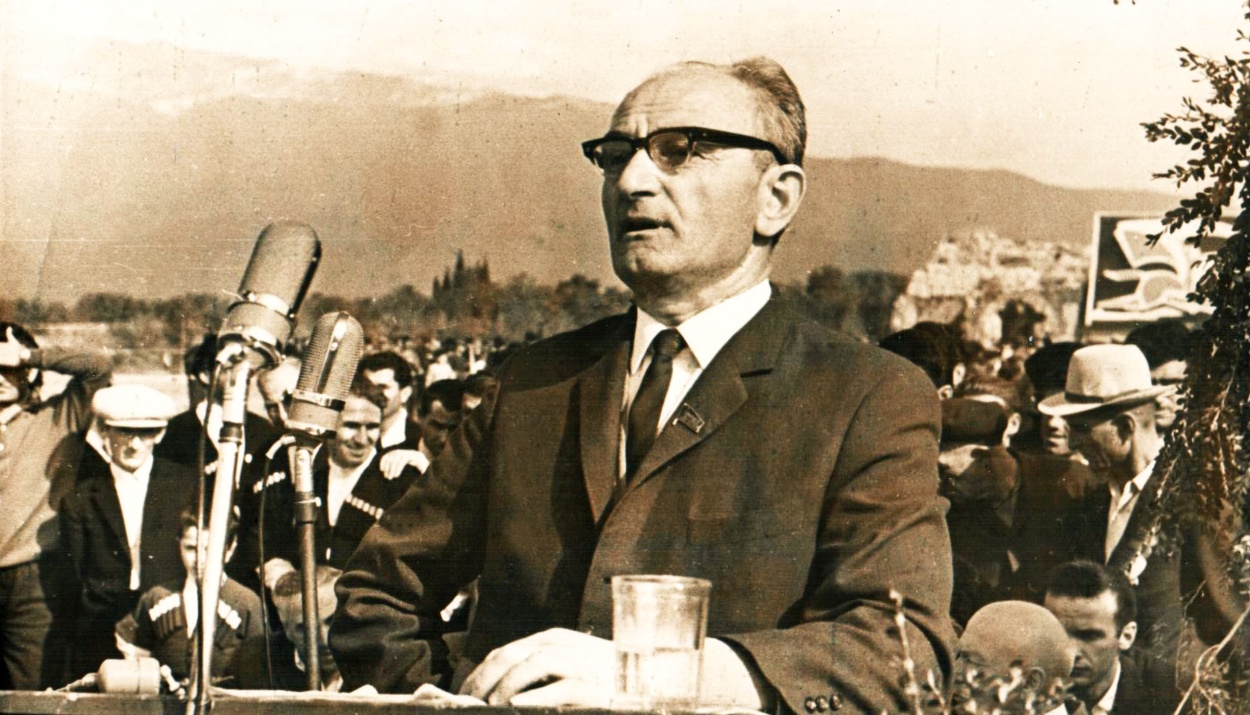 Georgi Dzidzaria was born on 6 May 1914 in the village of Lykhny, Gudauta District. After graduating from the Moscow Institute of History, Philosophy and Literature (MIFLI) in 1939 he returned to Abkhazia, where he devoted himself to scholarly and pedagogical work.

The student on his teacher
Historian Soslan Salakaya recalls his academic advisor Georgi Dzidzaria as a person who drew him towards academic activities. Salakaya knew the outstanding researcher from childhood. 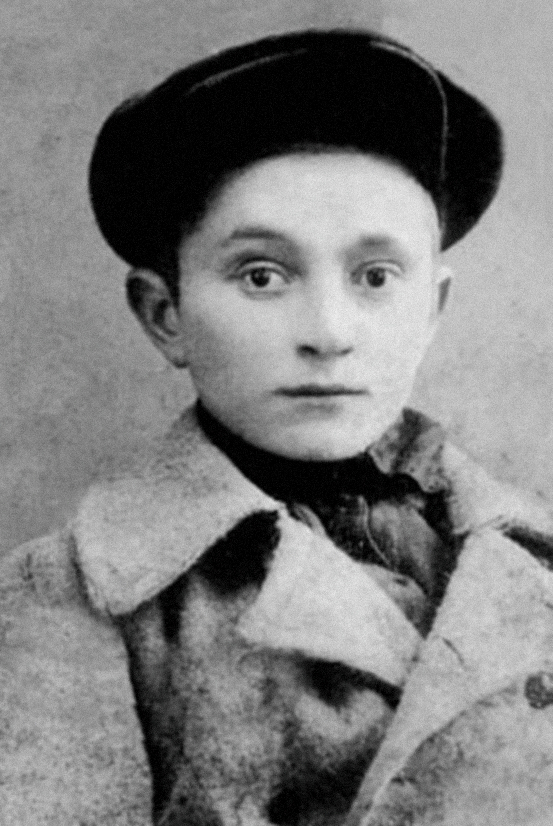 Georgi Dzidzaria - a student of the Sukhum Abkhaz Boarding School, 1931.

"It so happened that I knew him from early childhood, because my parents worked with him at the university. Georgi Alekseevich was one of those who indirectly drew me to history and, after graduating from the history faculty of the Abkhazan State University, he became my scientific advisor," Salakaya.

In 1953-1957, Georgi Dzidzaria was deputy-director for scholarly work, and from 1966 to 1988 he was director of the Abkhazian Research Institute (now the Abkhazian Institute for Humanitarian Research named after D.I.Gulia of the Academy of Sciences of Abkhazia). From 1939, he combined research work with teaching history at the Sukhum Pedagogical Institute, where from 1957 to 1966 he served as rector, and later, concurrently, as professor of the Department of the History of the USSR. 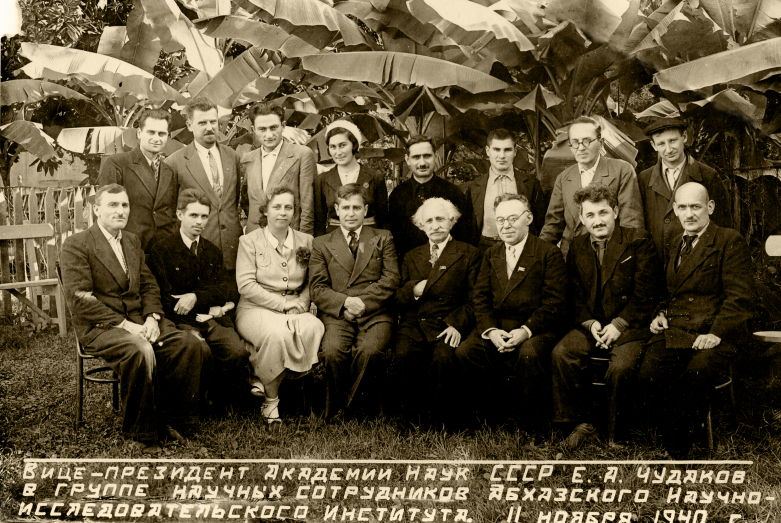 Vice-President of the USSR Academy of Sciences Yevgeny Chudakov in the group of research workers of the Abkhaz Research Institute, Georgi Dzidzaria third from left, November 11, 1940.

Soslan Salakaya said that his mentor Georgi Dzidzaria entrusted him with the topic of a scholarly dissertation related to the history of Abkhazia in the 19th and early 20th centuries.

“Unfortunately, he did not supervise me for long, because in May 1988 Georgi Alekseevich died. He left such a deep mark on my life that I consider him my mentor, who guided me along the path of scholarship. I deal with the very same topic but, of course, not on such a scale, for he was a major specialist of the late 19th and early 20th centuries, the author of fundamental research-works, which are still our main support in historical sciences," Soslan Salakaya emphasised.

"These and other works are the pinnacle of our historical research; it is impossible to overe-evaluate them -- we only add that which, due to the nature of that time, he could not write, for example, about the practical absence of serfdom amongst us, since in those days it was considered politically incorrect to write about this . This did not correspond to Marxist-Leninist methodology," says Soslan Salakaya. 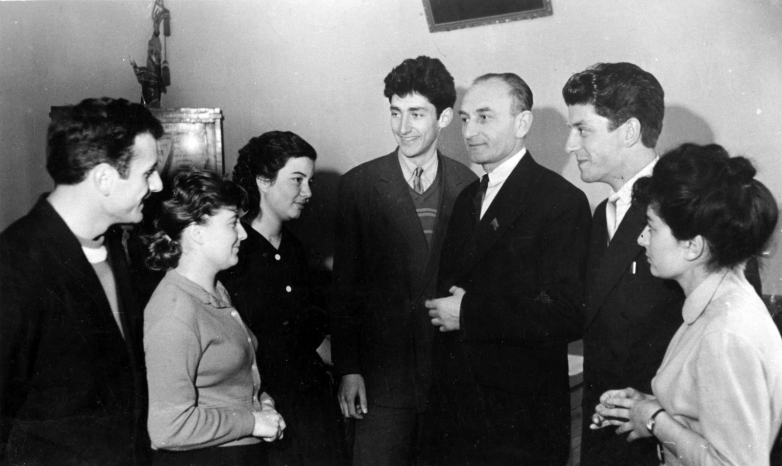 Rector Georgi Dzidzaria with a group of students, 1961.

After the Great Patriotic War, Abkhaz-language schools began to be closed in the republic. The historian Georgi Dzidzaria, together with the linguist Konstantin Shakryl and the poet Bagrat Shinkuba, sent a letter to the Central Committee of the All-Union Communist Party of Bolsheviks in 1947 in which they talked about the negative consequences of the closure of Abkhaz-language schools as well as numerous examples of the infringement of the rights of the Abkhazian people, and also the distortion of its history and culture.

Such a letter could not but arouse the anger of the authorities, he believes, followed by repressive sanctions, penalties along Party- and service-lines, refusals to publish works by the authors of the letter, endless challenges and proceedings in the Politburo of the Central Committee and the Regional Committee of the Party. The situation changed only after Stalin's death.

Strict and outgoing
Speaking about the personal qualities of Georgi Dzidzaria, Soslan Salakaya noted that he was always strict, but at the same time loved his team.

“It often happened that he would take his colleagues to task for non-completion of work, but after that he would find positive moments in their work and immediately smooth everything out. On the one hand, he knew how to demand, at the same time he was very benevolent and suggested how to improve performance," he says. 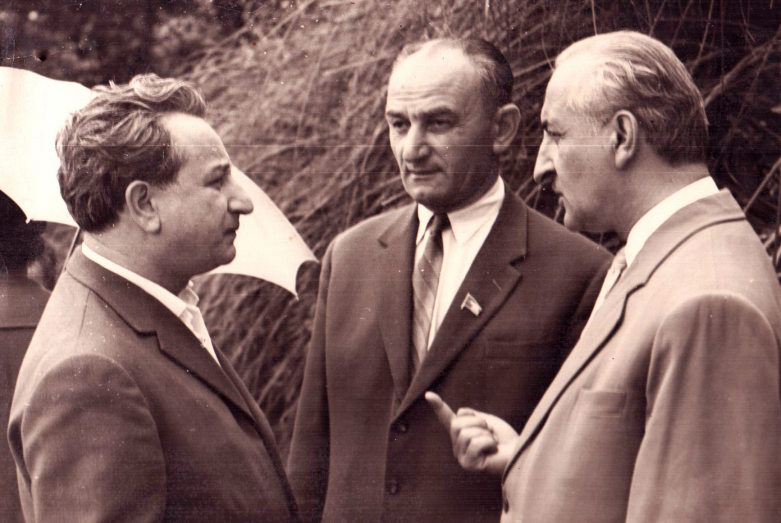 After the creation of the Abkhazian State University, from 1979 to 1988 he read there a course on the history of Abkhazia in the 19th - early 20th centuries, headed the branch of the Department of History, Archaeology and Ethnography of this University, organised at the Abkhazian Research Institute.

In 1946, Georgi Dzidzaria defended his candidate's thesis, and in 1958 his doctoral dissertation. He stood at the origins of the formation of Abkhazian historical scholarship, the foundations of which were laid in the conditions of the absence of both professional national scholar-historians and any historiographical tradition, coupled with a meagre source-base.

The scholar's bibliography contains more than 400 published works, of which more than 150 are scholarly works, including 50 monographs, plus collections and brochures. From 1975 until the end of his life, Dzidzaria was the chairman of the Supreme Council of the Republic of Abkhazia. Georgi Dzidzaria's great services to the people and the state were marked with awards: two Orders of the Red Banner of Labour, two Orders of the Badge of Honour, the Order of Friendship of Peoples and others.

Commemorative coins issued for the 100th anniversary of Georgi Dzidzaria.

After the death of Dzidzaria, two volumes of his scientific works were published. Much later, the third volume was published, which included unpublished works of the scholar and a collection of materials prepared by him on the history of Abkhazia. Georgi Dzidzaria passed away on 1 May 1988.

There is a State Prize in Scholarship in the republic that is named after Georgi Dzidzaria. It is awarded for outstanding achievements in the field of the humanities and natural sciences which have received wide public recognition and are a major contribution to the development of scholarship in the Republic of Abkhazia.