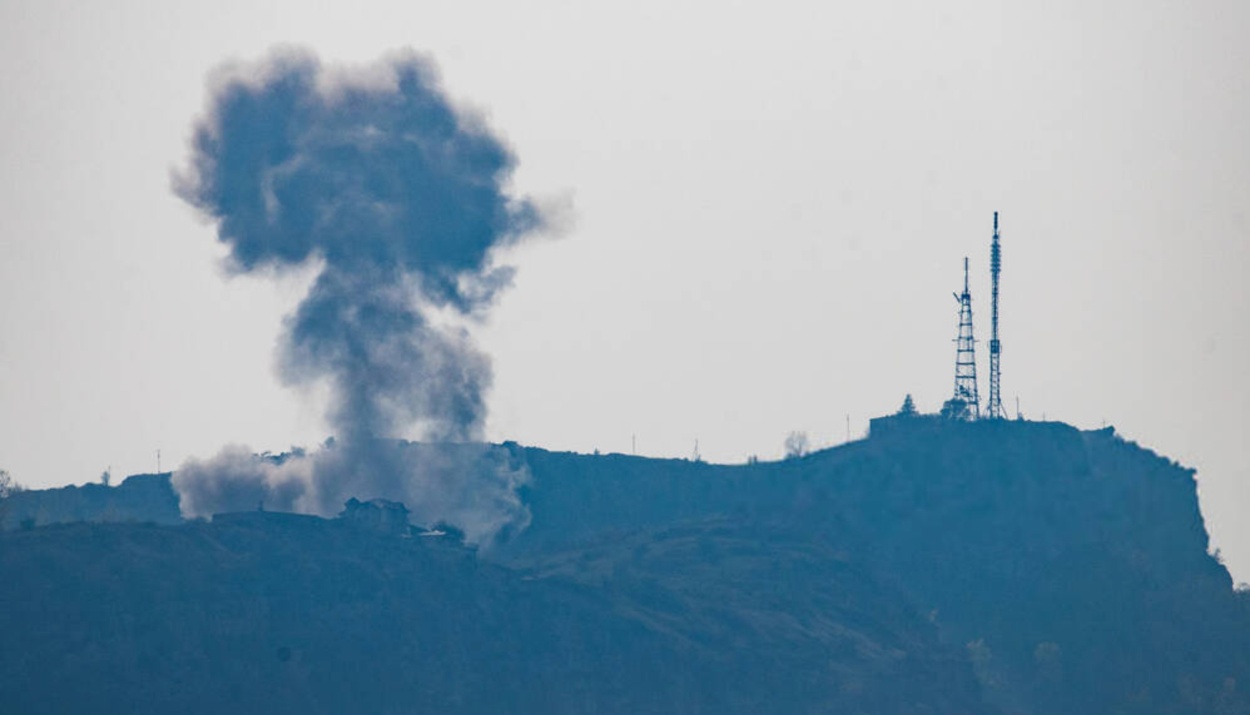 Smoke rises over the city of Shushi after the October 28 military strike.

At the end of the Cold War, the three conflicts that broke out in the South Caucasus region; Georgia – Abkhazia, Georgia – South Ossetia, and the conflict between Armenia and Azerbaijan over Nagorno Karabakh, all ended in ceasefire agreements. The conflicts were called ‘frozen’ conflicts. All three conflicts were historical; they were fought to establish independence and territorial rights over pre- Soviet land; the conflicts in Abkhazia and South Ossetia were separatist conflicts between non-state elements and the parent state, Georgia; in Nagorno-Karabakh the conflict was an inter-state conflict from the start giving it more potency in terms of lethality and violence as well as an ability to spread beyond its territorial limits.

Today that danger is very real with a more strident tone and involvement from Turkey in support of its ally Azerbaijan and Ankara’s long-running unresolved poor relationship with Armenia. In cultural terms, religion has not played a part in the conflict despite the two conflict parties being of different religions. However, with Ankara’s determination to resolve the conflict in the interest of Baku, and Armenia so far standing alone despite rhetorical support from western allies and Moscow, the face of the conflict can change and become another of the contemporary world’s conflicts in which religion becomes a motivating factor. The danger of Nagorno Karabakh becoming a ‘call to arms’ for those regional Islamic groups fighting in Middle Eastern conflicts, Afghanistan and its neighbourhood, and previously in the north Caucasus must be considered real. We are told that already there are Syrian – based groups involved.
The original conflicts were all ‘frozen’ by ceasefire agreements under different mandates. The Moscow Agreement under UN oversight in Abkhazia; in South Ossetia, the Sochi Agreement under a joint agreement between Russia and Georgia; and in Nagorno Karabakh, the Minsk Agreement brokered by the OSCE. All these agreements have been broken. In the case of Abkhazia and South Ossetia, they no longer exist having been finally ended by the Russia-Georgia 5-day war of August 2008. In Nagorno Karabakh any hope of the Minsk Agreement remaining as a viable instrument leading to peace, is disappearing fast.

The lesson of history is that ceasefire agreements do not resolve conflicts and are by nature temporary instruments to bring a conflict to a temporary end while more permanent solutions are found. The longer a ceasefire is in place the more likely it is that it will be ignored. Those external actors charged with overseeing a ceasefire agreement will themselves move on and lose interest, at the same time losing the necessary focus to move a tentative agreement to a more sustainable position. Then the conflict becomes generational and upcoming generations not born in the worst times, will be fired by nationalistic ambition, and left unrestrained by the memory of the horror that was the original conflict will re-kindle the old animosities. Changes in the conflict will continue; not just outbreaks of violence, but changes in actors with different ideals meaning approaches to the underlying and historical problems will change which in turn means agreements may have to change.

In the conflict over Abkhazia, it is easy to see how drift over time and lack of external focus on the meaning of change led back to war. The Moscow Agreement, which was a ceasefire and separation of forces agreement signed in 1994 to end the fighting that began in 1991 remained unchanged until 2008 when Georgia and Russia went to war with the inevitable result of a victory for the more powerful state. By then UN influence over the conflict had diminished to being almost imperceptible in character and action. The Russian and Georgian leaderships had changed in character and approach from one of mutual communication to ambitious nationalism on both sides. The same lack of apparent need to adapt agreements to changing circumstances can also be seen in the Sochi Agreement that brought ceasefire to the conflict in South Ossetia and the OSCE brokered agreement that brought hostilities to an uncertain end in Nagorno Karabakh in 1994.

In all cases the warring parties in the original conflicts have changed in ambition, demographics, and personality, so have the external actors seeking solutions; but the terms and conditions remain, and have not been adapted to these new realities, new personalities and new shifts in the conflicted populations. Consequently, there is no such thing as a conflict that is ‘frozen’ as the conflict ‘ice’ will always move like a glacier towards the inevitable consequence of glacial melt and a return to open hostilities. This is now the sad story of the conflict over Nagorno – Karabakh.

Ankara’s growing ambition in the Middle East and South Caucasus region is an example of the need for those charged with resolution, in this case the Minsk Group, to react resolutely to the aspect of ‘change’ in leaders as well as events in a conflict region; to work out what it means, and if necessary, make changes to existing conflict management leading to prospects for compromise. The lack of potential for compromise in Nagorno Karabakh is limited as the more powerful actor in the shape of Turkey has taken advantage of an international community weakened by the pandemic, and other factors. The co-chairs of the Minsk Group have in a sense been side-lined for the time being and resolution is not in sight.

The recent ceasefire agreement that was agreed by Baku and Yerevan and brokered by Sergei Lavrov to establish humanitarian corridors in the zone of conflict was agreed by Baku and Yerevan and then substantially broken. Yet, the establishment of humanitarian corridors in conflict is a requirement under international law. In recent times the legal requirement has been broken or ignored frequently; and those parties breaking it have not been penalised, which means the ‘law’ has been undermined steadily over time. There is a trend in contemporary conflict where the historical understanding, if not adherence, of states to international humanitarian law, the international law of armed conflict, St. Thomas Aquinas’ ‘Just War’ theory, the Geneva Convention and other norms collectively used to be the control mechanisms that limited the behaviour of warring parties, are not forgotten, but frequently ignored. One reason for this is the increasing presence of non-state actors on the battlefield and the difficulty of communicating with them under rules and agreements they never signed up to. Another reason is the tendency of the more powerful states not to set the example of upholding legal norms, thus eroding prospects for conflict resolution.
The lesson of conflicts with ceasefires in place being allowed to remain unchanged is a difficult one to deal with in all conflicts; in particular the generational issue. In the conflict in the Donbass region of Ukraine the young males of 2014 are now of weapon-bearing age making a possible return to violence more, and not less likely given the low economic prospects of those young males.

However, here there is a certain frankness emerging in the rhetoric of the Kiev administration that gives some small grounds for hope in reaching meaningful outcomes in conflict management. The simple message from a member of the Kiev administration recently that ‘Ukraine cannot simply blame Russia for the conflict’ is a simple but powerful statement which if allowed to develop can reap benefits. This depends on Moscow reacting positively to this change in rhetoric. The language and ‘body language’ of all parties to this conflict since it broke in 2014 have been confrontational and negative, so this recent rhetorical shift is positive but with a sense that it may be short – lived unless it is reciprocated. Moscow has to react to this minor change in ‘body language’ from Kiev if it is to mean anything.

Overall, and despite the fast – changing character of conflict, those states in the international community who involve themselves in conflict management towards resolution often stick to old practices. Crucially the focus is most often to take a top-down approach, government to government, sometimes with the external agenda taking precedence, and being unable to communicate with the non-state ‘sector’ of the conflict for fear of legitimising a separatist state or organisation. Notably, states take a top-down approach to conflict management, sometimes placing democratisation as a key objective in resolving conflicts even in states with no evolved or evolving democratic culture. Arguably the real objective is to restore the economic potential of the upcoming generations.

The top-down approach for some is the natural course to take, but in the so-called ‘frozen’ conflicts that have progressively ‘melted’ there is a stark reality; the generational question will always allow the prolongation of the problem. This has been seen in Georgia, Northern Ireland, and many other places. The motivation among young males to fight if you have not fought before is very powerful, particularly in countries with machoistic tendencies; and if there are powerful external influences supporting it, the conflict will always regenerate on the bedrock of those ready to fight. Here a ‘bottom-up’ approach to extract the new generation from the generational trap must be considered a priority if the conflict is to end peacefully.
Upcoming generations, including new political elites, their economic prospects, education, status and dignity are arguably the key aspect of conflict management leading to resolution in the 21st Century where old norms of conflict behaviour are fading. The motivation NOT to fight if you are going to lose your means to a prosperous future is a very powerful one.