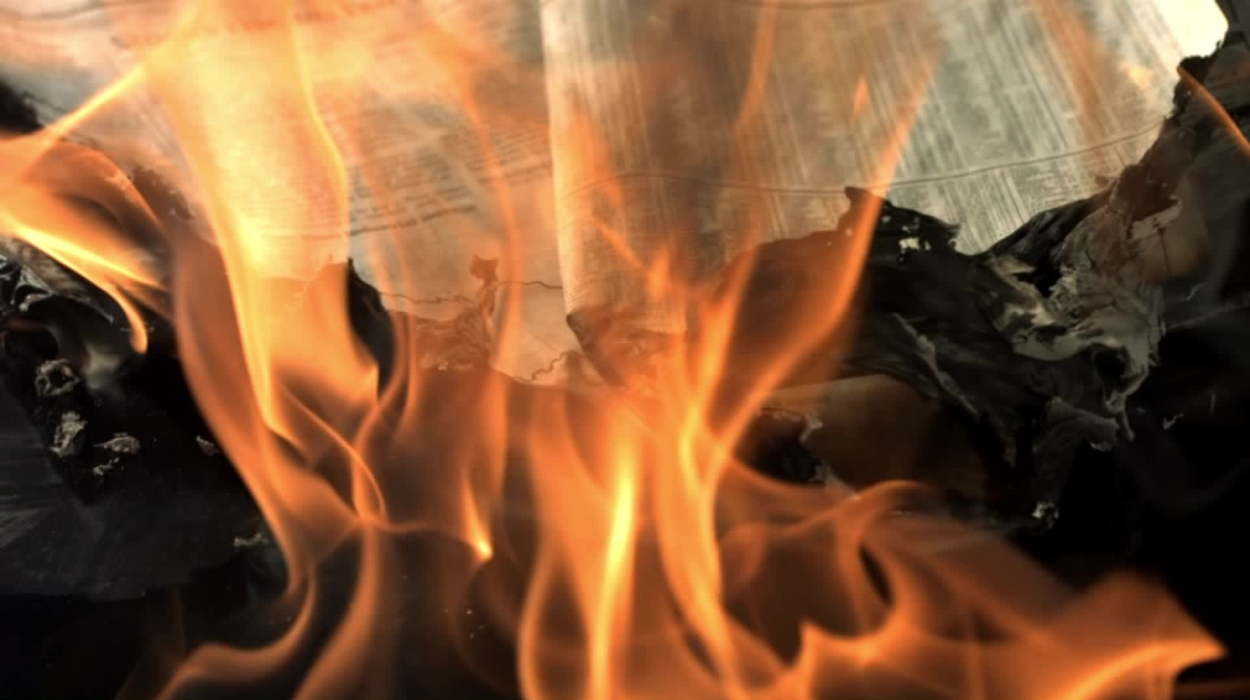 Last Saturday, on the Sukhum embankment, the youth-movement Ҳа Ҳпитсунда [Ha Hpitsunda = Our Pitsunda] organised an exhibition dedicated to the burning of the State Archives of Abkhazia and the Abkhazian Institute of History, Language and Literature [ABNII]. Sukhum residents and eyewitnesses came to the exhibition, where they shared their memories of this tragic event for Abkhazian scholarship and culture.

On 22 October 1992, in Sukhum, then under occupation by the troops of the State Council of Georgia, Georgian guards burned down the State Archives of Abkhazia and the Dmitry Gulia Abkhazian Research Institute of History, Language and Literature. In commemoration of this day, the Ha Hpitsunda-movement organised a photo-exhibition on the embankment of the capital, the purpose of which was to attract attention, share information and promote the installation of memorial monuments on the site of the State Archives and the Abkhazian Institute.

Among the exhibits of the exhibition were photographs and clippings from articles on the Abkhazian archive. 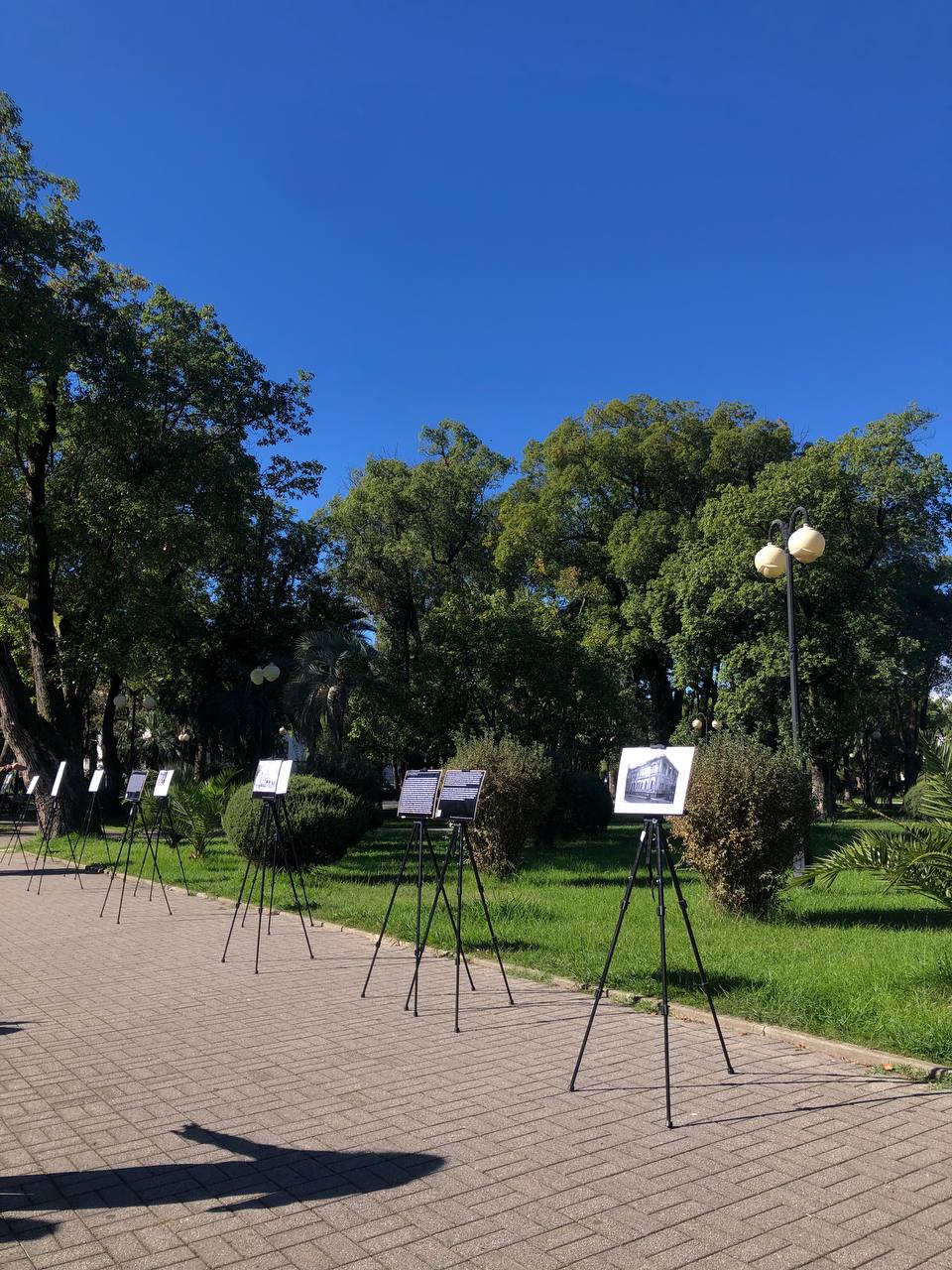 Roman Gvindzhia, head of the State Archival Administration, spoke about how the Abkhazian archive was burnt down. Immediately after the end of the war, the prosecutor's office conducted an investigation into this crime, all eyewitnesses were interviewed, and the fact of deliberate arson was fully established:

“At first, several people drove up and started setting fire to the archive, local residents came out, became indignant, they told them that it was none of their business. They wanted to set fire to two churches that were nearby – a Polish church and a German church, where documents were also stored. But the locals began to tell them: ‘What are you, this is a church, you don’t believe in God? After all, there are no valuable documents there.’ They set fire to the archive and left. And they came here on the embankment to burn down the ABNII building. When they left, local residents tried to put out the fire, calling the fire brigade, which was then still working. But, apparently, someone told them about this, and they returned, they even say that there was some kind of armoured car, and they dispersed everyone with automatic bursts. The locals recognised them; there were people wearing the uniform of the military police, which was headed by Soso Akhalaia, and there were Dima Churgulia, whom everyone in Abkhazia knew well, and Mamkelashvili [I believe that was his surname], who both worked in Nadareishvili’s personal guard."

According to Roman Gvindzhia, 180 thousand items in store and about 700 funds, the personal archives of prominent scholars such as Smetskoj, Omar Begua, Prince Shervashidze and others were lost in the fire. The archive contained documents from the period of the Georgian Democratic Republic, documents on the history of Abkhazia, Western Georgia, the Black Sea region from the 18th, 19th and 20th centuries.

An important part of the state archive was formed by the documents of Gruzpereselenstroj [viz. Georgian Resettlement] which testify to how the demographic situation in Abkhazia was forcibly changed due to the resettlement here of a population from Georgia. According to the Russian census of 1897, about 80% of Abkhazians and less than 3% of Georgians lived in Abkhazia, but according to the Soviet census [sc. of 1989], the Georgian population was already 48%, and the Abkhazian 17%. Many of these documents are unique, Gvindzhia says, because they were preserved only in the Abkhazian archive.

“Here in these churches – they did not know about it – documents of the so-called insurance- or reserve-fund were kept, where information was transferred not onto paper; these were microfilms and photocopies of the most valuable documents. And they survived. We could not read them for a long time, because there was no appropriate equipment or specialists. But when he was Minister of Foreign Affairs, Vjacheslav Chirikba raised this issue at the Geneva negotiations. I then proposed to involve specialists from the Czech Republic in the work, because the best specialists in Europe in restoration matters were to be found there, and we began slowly to restore the archive. We have actually completely restored two funds; these are the Council of People's Commissars of Abkhazia and the People's Commissariat of Education. This work is very long; they gave us special glue, special paper, equipment and so on. But, unfortunately, now all of this is coming to an end, and in connection with the current situation, it is already no longer possible for these materials to be transferred to us."

Arda Inal-ipa, a member of the board of directors of the Centre for Humanitarian Programmes, spoke about how the issue of the burning down of the State Archives was discussed in Moscow during the war. A meeting of representatives of the Abkhazian and Georgian intelligentsia in Moscow in order to stop the bloodshed was organised by Grigorij Gorin, whose Sukhum-born wife with Georgian roots had parents remaining in Sukhum:

“Zurab Achba, Nata Zukhba and I were present there from the Abkhazian side. Also present were Bulat Okudzhava and Alexander Ebanoidze. I was very fond of his plays and used to go to performances in Moscow theatres. Shortly before, this terrible crime (the burning down of the archives) had taken place, and we spoke about it as ethnocide. I must say that Bulat Okudzhava said that it was necessary to stop this war – this crime – immediately; he was absolutely against the war. But in response to our words about the burning down of the archives, Alexander Ebanoidze suddenly said that in reality everything was different, that it was advantageous to the Abkhazians to burn materials testifying to the rights of Georgians to this land. I then remember that I lost my temper and told him: ‘What are you talking about? Are you saying that the Abkhazians who have been collecting all these materials for the seventy years of the existence of this Institute have been waiting for the invasion of Georgian troops, waiting for when the city is occupied to destroy the archives? There is absolutely no logic to this.’ Such a performance from a man whom I considered a great writer was just horrible."

Tamaz Dzimistarishvili, philosopher, was at the scene on 22 October 1992; he also recalled how it all happened:

“In general, on that day, Natasha Shulgina and I were with Larisa Argun (wife of the famous Abkhazian writer Daur Zantaria), Larisa had not left because she did not know about the fate of her boy, Nara, and therefore she had remained here. We went on bicycles, and many people came towards us, saying: ‘Just look, the State Archive have been set alight!’ And we went there. I stood, I looked – everything was burning there, and to my right a man says to me in Mingrelian: ‘They drove up, threw canisters of gasoline and set it alight.’ He told me the names of those who did it, those who led this act of arson. Then they said that ABNII was on fire. Natasha and I cycled up there, but the ABNII building was cordoned off, and they were not letting at all anyone through; they were probably afraid that people would put out the flames. This is despite the fact that Tamaz Nadareishvili's mother was a Shervashidze, an Abkhazian – yes, they did such a thing."

The next morning, Tamaz Dzimistarishvili went to a call-centre to phone a friend in Tbilisi who was the Deputy Prime Minister of the Georgian government and told him that the archive had been burned down in Sukhum. “But apparently,” Tamaz says, “Nadareishvili had already called them and given them such information that the Abkhazians on hang gliders had flown in and set fire to both buildings.” He also met with people who had phoned Shevardnadze's secretariat and given warning that they planned to burn down the archive, the state-museum, the Abkhazian Institute and the Abkhazian theatre in Sukhum. They were told there that they needed to contact Khaindrava, Shevardnadze's representative in Abkhazia. When he was informed, it was already too late, the archive and the ABNII building had been burned down.